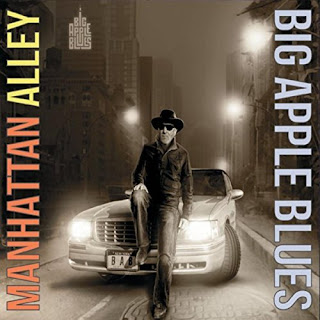 A current topic of conversation among friends and acquaintances is what type of music is best suited to see us through these dark and awful times. Hardcore punk is certainly a strong contender. And several other musical genres work at different moments. But we always seem to return to the blues. Manhattan Alley, the new album from Big Apple Blues, should help pull us through. It is far from the standard blues album. It’s an instrumental album, mixing blues and jazz and soul and rock, and featuring all original compositions. Big Apple Blues is made up of Admir “Dr. Blues” Hadzic on bass, Barry “The Baron Of The Blues” Harrison on drums, Zach Zunis on guitar, Jim Alfredson on organ and keyboard, and Anthony Kane on harmonica. Joining them are Chris Eminizer on saxophone, Bill Vits on shakers, Kevin Jones on percussion, and Louis Rudner on acoustic bass.

The album kicks off with one of its strongest and most fun tracks, “You Gotta Start Somewhere.” This is funky blues with a delicious groove and a great jam feel to get you dancing. The horn gives it something of a classic sound; then the guitar lead has more of a rock flavor.  I especially dig the work on keys toward the end of the song. The fade-out comes suddenly and, to my ears, prematurely. I want this one go on longer. I am nowhere near done dancing yet. That’s followed by “Happy.” As it opens, it has a more serious tone. Then, like twenty seconds in, when the horn comes in and the groove is established, this song lifts my spirits. As its title suggests, this is blues to make you happy. And, hey, we can all use that these days. This track features more good work on keys.

Another of my favorite tracks is “SDW,” a mellower, thoughtful tune. I love the way the soulful saxophone blows over that slow, interesting groove. “Hudson Breeze” is one, like “Happy,” that sounds as you’d expect from its title. It’s a light, kind of breezy tune, perfect for summer. And I like that section toward the end where the percussion gains in prominence. That’s followed by “Steamroller,” which has a wonderful funky edge and becomes a good jam, led by some really nice work on guitar. Then “Subway Rumble” has a late 1960s, early 1970s vibe, and is another highlight. Hey, if being on the New York subway always sounded this good, people might be a whole lot happier, with a bit of a dance in their step. Imagine that. The album concludes with “Rock On,” a rocking blues number with a steady beat.