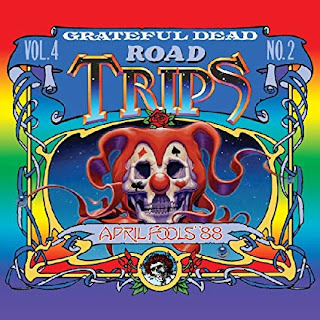 Real Gone Music is continuing to release the Grateful Dead Road Trips series on CD. Previously, these recordings were only available through the Grateful Dead’s official website. Real Gone Music is putting them out in reverse order, and the latest release is Vol. 4 No. 2, which contains the complete show the Grateful Dead performed on April 1st, 1988, as well as a lot of the show from March 31st, 1988. Both shows were at Brendan Byrne Arena (also known as Meadowlands) in East Rutherford, New Jersey. Not a whole lot of shows from 1988 have been released officially, and that is one reason I am pleased to have this set in my possession. The shows on these discs were performed approximately one week before my first show, another reason this set piqued my interest.

The order the songs are arranged in on these discs is a little weird. The first disc contains the entire first set from April 1st, then a couple of songs from the end of the first set from March 31st, and then the encore from April 1st. The second disc contains the second set and encore from March 31st, and the third disc contains the second set from April 1st. I’m not sure why it was done this way. I certainly prefer to hear the songs in exactly the order they were performed, along with whatever tuning and banter occurred between songs. If it had been up to me, the second disc would either have been first (in the order it happened) or third (as a sort of bonus disc), and I probably would have cut the two songs from March 31st from the first disc. That way, the only weird thing would have been the encore stuck at the end of the first set rather than at the end of the second set (something that was often done on cassettes back in the day anyway, due to space).

It was April Fools’ Day, and the Grateful Dead start the show with a bit of playful tuning, including what sounds like “Itsy Bitsy Spider,” after which Bob jokes that the first set is over. “Thank you very much, we’ll be right back.” The crowd appreciates the humor. The band then kicks off the first set with an energetic, fun rendition of “Mississippi Half-Step Uptown Toodeloo.” Man, listen to Jerry belt out “On my way!” And at the end, his guitar is singing and soaring. This is a damn good start to the show, and they keep up the positive vibes by following it with fan favorite “Jack Straw.” This is a rockin’ version, particularly toward the end. They then go right into the sweet “To Lay Me Down.” I love this song. The following year, I saw them perform this one at Sullivan Stadium, and I swear there was a glider overhead, dipping its wings in time with the music. “To wake beside you, my love still sleeping.” The band follows that with Bob Dylan’s “Ballad Of A Thin Man,” a song the Dead performed only twice without Bob Dylan. Bob really tears into this one vocally. This was never one of my favorite Dylan songs, but I like the way Bob handles it. Jerry then gives us a decent version of “When Push Comes To Shove,” featuring some nice work by Brent on keys, and Bob follows it with “New Minglewood Blues.” “A couple shots of whiskey, these Jersey fillies start looking good.” One of the highlights of the first set for me is “Cumberland Blues.” This one move and shakes, and the vocals sound great. The band then wraps up the set with “Deal,” the energy nice and high during the jam at the end.

As I mentioned, the first disc then includes two songs from the first set from the night before. First we get a nice version of “When I Paint My Masterpiece.” “Someday everything’s gonna be different/When I paint my masterpiece.” That is followed by “Let It Grow,” which concluded the set. (At the show, these two songs were separated by “Ramble On Rose.”) This is a really good version, with plenty of jamming. The first disc then concludes with the encore from April 1st, “Brokedown Palace.” There are some forgotten lyrics, but it’s still a good version. “I love you more than words can tell.”

The second disc contains the second set from March 31st, and the band kicks it off with “Scarlet Begonias,” a song that never fails to make me happy. The jam is good, but it’s not long before it slides into “Fire On The Mountain.” That familiar guitar part makes me smile, and you can hear the crowd react. There is a whole lot of energy to this version of the song. Bill and Mickey then lead the band into “Samson And Delilah,” to keep everyone dancing and grooving. Things then get more interesting with “Terrapin Station,” another crowd favorite. Yeah, this is a really good second set. The segue into “Drums” is interesting, kind of easing into strange territory rather than immediately turning to a straight beat. Yes, we’re finally in weirder lands. And “Space” takes us further outward and inward, to a place populated by aliens and sprites. And, man, when “Goin’ Down The Road Feeling Bad” begins to emerge, it sounds positively bizarre. Like the road is coming from another world. And then suddenly, bam, we are back on familiar ground. That transition from “Space” to “Goin’ Down The Road Feeing Bad” is one of my favorite moments of the show. And then “Goin’ Down The Road” is so smooth, so good. That leads into “I Need A Miracle,” with Bob nearly howling some of the lines. And, holy moly, the heavens know we all need a miracle today. From there, the band slides into “Dear Mr. Fantasy.” Oh yes, Brent! “Take us out of this gloom.” That song is, of course, coupled with the “Hey Jude” reprise, and it’s a really good version. The set then concludes with “All Along The Watchtower,” which begins tentatively, which is interesting. When it feels like the song is about to kick in, Bob stops it with “Wait a minute,” keeping the sound sparse just a bit longer. It’s a really unusual and cool version, and a strange way to end the second set. For the encore, they choose another Dylan song, “Knockin’ On Heaven’s Door.” It’s interesting how differently Jerry approached this one when playing it with the Dead versus when playing it in the Jerry Garcia Band. This is a really moving rendition.

The third disc returns us to the main show of this release. The band kicks off the second set with “China Cat Sunflower.” Jerry’s voice is a bit rough, but no matter. This song always seems to work. The jam leading to “I Know You Rider” has a bright, positive feel, and the transition is seamless. This is a lively, wonderful “I Know You Rider.” No one is holding back here. The band then delivers my favorite pairing of songs: “Estimated Prophet” into “Eyes Of The World.” This is an excellent “Estimated,” hitting all the right spots and featuring a good amount of jamming. Bob goes a bit nuts vocally at one point, as he sometimes is wont to do, and that leads to a groovier jam that I love. The transition to “Eyes” isn’t as smooth as that from “China” to “Rider,” but once we’re there, this song just shines. “Eyes” always lifts my spirits, gets me dancing. I would have liked a little longer jam at the end before Bill and Mickey take over for “Drums.” This “Drums” comes on strong before getting into stranger territory. This time it’s like the weirdness overtakes them gradually until we’re all immersed in the throbbing heart of a mountain, with dwarves working away. And then we go deeper. Things become dangerous, and then “Drums” gives way to “Space,” and it’s like we’re suspended in heavy air, floating but able to make waves with our movement, and those waves come back to us, from walls, from others, from whatever lurks in the darkness. And they soon make themselves known, showing off their magnificent and esoteric machines, boasting. “Look what we can do to your reality.” And they turn another knob, and we are propelled into green and yellow. We’ve made contact, and the little bastards are toying with us. But, hey, everyone deserves a little fun. Just as our selves feel about to dissipate entirely, “The Other One” pulls us back together. But we are not safely on solid ground yet. Bob’s vocals are eerie at first, and everything is on edge, with input from beyond and beneath. It’s an intense “Other One.” The band is really plugged into something now, and not shying away from whatever they might learn or glean. Holy moly!

From there, the band eases into “Wharf Rat,” another excellent song. And we know soon we’ll be pulled up, lifted up with the band. We are not quite at sunlight yet, but it’s coming. This is a powerful rendition of “Wharf Rat,” and when Jerry sings “I’ll get up and fly away,” we all begin to feel lighter, better, like we are back in control of our destiny. Then suddenly the band goes into “Throwing Stones.” “Picture a bright blue ball just spinning, spinning free.” This song seems more relevant than ever. “The darkness never goes from some men’s eyes.” Oh man, listen to Bob deliver the line, “The future’s here, we are it, we are on our own.” “Thowing Stones” leads directly to “Not Fade Away,” a positive way to end the second set, uniting everyone with a fun song. “You know our love will not fade away.” What a journey the band has taken us on.