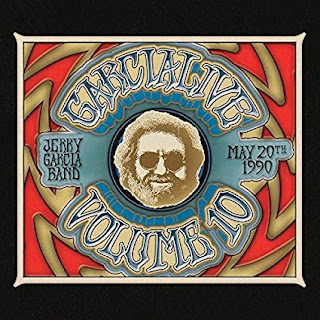 I was twenty-three years old the last time I saw Jerry Garcia perform with the Grateful Dead. That was half my life ago. Crazy. I still miss seeing him. And I love that we are getting so many Grateful Dead and Jerry Garcia Band releases these days. We certainly need them. We need that magic, that joy, perhaps now more than ever. And as much as I loved seeing the Grateful Dead, there were days when I preferred seeing the Jerry Garcia Band. Those shows had a looser, more intimate vibe. Garcia Live Volume 10 (the first volume in the series to sport a new look to its cover) is a two-disc set containing the complete show that Jerry Garcia Band performed on May 20, 1990 at the Hilo Civic Auditorium in Hawaii.

Jerry Garcia opens the show with a delightful rendition of “How Sweet It Is (To Be Loved By You).” It isn’t long before the joy is apparent in both the vocals and the playing. Check out Melvin Seals’ work. “I want to stop and thank you, baby!” A really good start to the show. The band follows that with “They Love Each Other,” and immediately Melvin is making his presence heard. I’ve always enjoyed this song, its sweet, positive groove, and this is a pretty good version. That’s followed by an energetic rendition of “Tough Mama,” the first of several Bob Dylan songs played at that show. And man, Jerry is getting into it! Listen to him belt out the lyrics. He then delivers a gorgeous, glorious rendition of “Like A Road Leading Home,” with help from backing vocalists Jacklyn LaBranch and Gloria Jones and more great work on keys. This is certainly a highlight of the first set. Jerry follows that with the fun “Run For The Roses.” This one feels a bit sloppy, but is still enjoyable.

I love the way “The Way You Do The Things You Do” begins, with bass and drums. Very cool. The band eases into this one, and then rocks us gently, joyfully. This track contains some really good, interesting jamming. That’s followed by “My Sisters And My Brothers,” in which Jerry reminds us, “Though this world of trouble, we’ve got to love one another.” The first set also includes a really nice version of “Knockin’ On Heaven’s Door,” featuring some passionate guitar work from Jerry, and some strange stuff on keys toward the end. Then Jerry closes out the set with “Deal.”

Jerry Garcia Band kicks off the second set with “The Harder They Come,” a song I find myself singing along to, shouting out some lines actually. It’s that kind of time, you know? That’s followed by a passionate, excellent version of “Forever Young,” Jerry’s voice sounding so good. This is certainly another highlight of the show. And it seems like everything is working perfectly now, for “Stop That Train,” which follows, is also really moving, while simultaneously getting your body active. It features another wonderful vocal performance from Jerry Garcia.

A fun, rockin’ “Tore Up Over You” is followed by a powerful “Tears Of Rage.” And then Jerry gets folks dancing again with a cover of Los Lobos’ “Evangeline,” and follows it with a good version of Bruce Cockburn’s “Waiting For A Miracle.” But it is “That Lucky Old Sun” that is seriously impressive. This is a beautiful, heartfelt, and engaging rendition, with some fantastic vocal work from Jerry, Jacklyn and Gloria, and wonderful stuff from Melvin on keys. This is one of the best versions of this song I’ve ever heard, perhaps the very best. The show then concludes with a seriously energetic rendition of Bob Dylan’s “Tangled Up In Blue.”