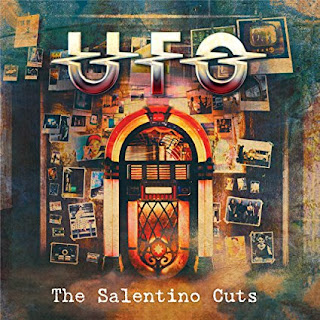 On the new album, hard rock band UFO tackles some classic rock gems from the 1960s and 1970s, as well as a few more recent songs. The Salentino Cuts finds the band covering some of their favorite tunes. It is UFO’s first album of covers. The band, which has been through many personnel changes since its inception in 1969, now features Phil Mogg on vocals, Andy Parker on drums, Paul Raymond on keys and backing vocals, Vinnie Moore on guitar, and Rob De Luca on bass. (Both Mogg and Parker are founding members.)

The CD kicks off with The Yardbirds’ “Heart Full Of Soul,” here titled “Heartful of Soul” for some reason. I saw The Yardbirds perform this one earlier this year at the Simi Valley Cajun & Blues Music Festival. Actually, they opened their set with this song. This version by UFO feels just a bit slower, heavier. And Vinnie Moore does some interesting things with that lead guitar part toward the end. It’s a good song with which to start the album, and it’s followed by another song I saw performed live at the Simi Valley Cajun & Blues Music Festival, “Break On Through.” (Robbie Krieger opened his set with this one, after a brief tribute to Gregg Allman). This version opens with a different drum beat, and appropriately features some good work on keys. And yes, Phil Mogg sings, “She gets high, she gets high” rather than the strangely edited “She get, she get” from the Doors’ original studio version.

“River Of Deceit” is a song I wasn’t as familiar with, and is the most recent song chosen for this album. It was originally recorded by Mad Season and released as a single in 1995. UFO delivers a good and powerful rendition. I love what sounds like a whale’s cry, which I don’t recall being in the original version. Some wonderful stuff, that. “River Of Deceit” is followed by Steppenwolf’s “The Pusher.” I was thirteen the first time I saw Easy Rider (that was also the first night I ever smoked pot), and this is one of the songs that stood out for me from that film, in part because it’s the first song you hear. It wasn’t long before I bought a Steppenwolf compilation on cassette (and “Snowblind Friend” quickly became my favorite). Anyway, UFO does an excellent job with this song, keeping the spirit of the original while also making the song their own, particularly with the way Phil Mogg delivers the lyrics. He really owns this one, making this one of my favorite tracks. (One more thing about that opening scene of Easy Rider – Phil Spector, as the drug connection, looks directly into the camera lens twice.)

John Mellencamp’s “Paper In Fire” is one I don’t hear covered very often. Actually, I can’t think of a single other version of it offhand. Anyway, it was a hit in 1987, and is one of the more surprising choices on The Salentino Cuts. UFO does a good version of it. It’s followed by Montrose’s “Rock Candy,” one of those early seventies reliable hard rock tunes. Apparently Sammy Hagar still performs it in concert. It’s not a bad song, but always feels like it goes on a little longer than necessary, and begins to feel repetitive. UFO’s version of Mountain’s “Mississippi Queen” feels a bit slower than the original, but with some really good work on guitar and plenty of cowbell.

Another of the surprising choices is Bill Withers’ “Ain’t No Sunshine,” although lots of folks have covered it, including other hard rock bands. I actually really like what UFO does with this one. They rock that “I know, I know, I know, I know” section, which works well, but it is Phil’s vocal work right after that that I find most impressive. He delivers the next line a cappella, and it sounds great. Another highlight is “Too Rolling Stoned,” the Robin Trower song. Though a couple of minutes shorter than Trower’s original version, UFO’s rendition becomes a good bluesy rock jam led by some excellent work on guitar. This album concludes with a good version of The Animals’ “In My Life.” “Though I’m dressed in these rags/I’ll wear sable someday.”

CD Track List
The Salentino Cuts is scheduled to be released on September 29, 2017 on Cleopatra Records. By the way, in addition to a CD release, The Salentino Cuts will be available on vinyl, in two limited editions.
Posted by Michael Doherty at 11:11 PM