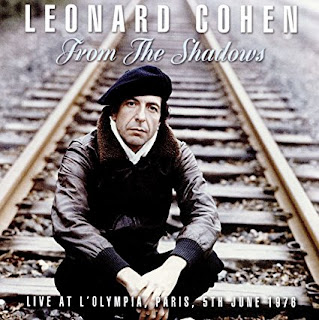 From The Shadows contains the show that Leonard Cohen performed on June 5, 1976 at L’Oympia in Paris. It’s another of those unofficial releases based on radio broadcasts, but I will take whatever Leonard Cohen I can get. Strangely, on the back of the CD case the show is listed as being from May 5, 1976, but that is not correct. The front of the case has the correct date. From what I can gather, this disc contains approximately half the concert that Leonard Cohen performed that night, and it includes a couple of songs some folks may be unfamiliar with – “Store Room” and “Do I Have To Dance All Night.” Neither of those songs was included on Leonard Cohen’s studio LPs (at least not originally). This disc contains more than an hour of music, and features some absolutely fantastic performances.

It opens with “Bird On The Wire,” which was the first song Leonard Cohen played that night. It’s a beautiful rendition, with Leonard Cohen singing some of it in French. By the way, he is backed on vocals by Cheryl Barnes and Laura Branigan, and they are gorgeous here. That song is followed by “Who By Fire” (it seems that this disc skips “So Long, Marianne”). Cheryl Barnes and Laura Branigan have a strong presence on this track as well. Sid McGinnis is on guitar, and Johnny Miller is on bass, and both deliver some interesting stuff here. The band is rounded out by Fred Thaylor on keys and Luther Rix on drums.

“Store Room” was not originally included on a studio release, but was later included as a bonus track on the 2007 re-issue of Songs, his first album. This live version is a lot of fun, with some wonderful stuff by Fred Thaylor on keys. What’s interesting is that the lyrics are almost completely different from that of the studio recording. Sure, we know that Leonard Cohen sometimes continued working on a song after releasing a studio version. The obvious example is “Hallelujah,” which gained a few new verses over the years. But this song wasn’t even released back then, and it’s interesting to me that he continued working on it without releasing it. Anyway, here is a taste of the lyrics: “Shakespeare, he said it all/Then he said no more/And he left me feeling just like a two-bit whore/Well, the silence broke my heart/But I spread my legs apart.”

That’s followed by “I Tried To Leave You,” a song from New Skin For The Old Ceremony. This song would later develop into a showcase for each member of his touring band. But here it is a cool, jazzy number, with Fred Thaylor’s work on keys standing out. Cheryl Barnes and Laura Branigan deliver a wonderful vocal section which makes this rendition something special. Then in “Lady Midnight,” instead of “Where I kneeled on her floor,” Leonard sings, “Where I begged like a dog on her floor.” After a high-energy version of “There Is A War,” Leonard Cohen does “Do I Have To Dance All Night.” This is a song he performed fairly often at the time, but which he did not include on a studio LP. It was, however, released as a single in 1976, paired with “The Butcher.” The version here is a lot of fun, especially with that prominent bass line. There is a crackling sound near the beginning of “Avalanche,” but it is a good version. It’s followed by “Chelsea Hotel No. 2,” at the end of which Leonard sings, “That’s all, baby, I don’t even think of you that often.” After this song, there is a radio station identification, in French. It’s kind of odd that the station identification is left in, since a lot of this show is apparently cut.

The version of “The Partisan” on this disc is interesting because of Luther Rix’s drum march which begins halfway through. There is another radio announcement after “The Partisan,” again in French. The backing vocalists nearly overpower Leonard Cohen at moments in “Famous Blue Raincoat.” It’s an unusual rendition, certainly not my favorite way that I’ve heard him perform it. He ends it with the spoken line, “Sincerely, a friend.” And for some reason there is yet another radio announcement. It’s kind of irritating at this point. I want nothing to interrupt a Leonard Cohen recording. And there is another radio interruption after “Lover Lover Lover.” What the fuck? Well, I totally dig this version of “Is This What You Wanted,” which has some interesting changes. This disc then concludes with “Suzanne.” “And you know she’s half crazy, but that’s why you want to be there.” Oh yes.