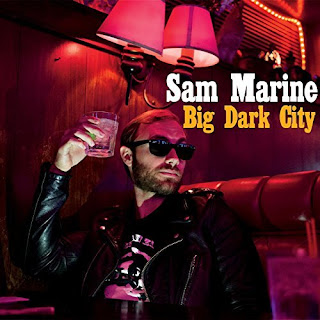 There is something about good, straight-forward roots rock music that makes me feel younger than I am. It takes me back to my youth, when – oddly – I was looking forward to being older, driving to concerts, getting into bars, exploring the world and so on. Remember those long days of summer, when dusk held out promises and possibilities and gave us the illusion of being grown up? I’m still holding onto that illusion, I think. Sam Marine’s new release, an EP titled Big Dark City, takes me right back to those days, with its excellent rock tunes, somewhat rough vocals, and its total lack of bullshit. Sam Marine is based in Los Angeles. Big Dark City is his third release, following 2013’s Lacktown and 2015’s New Home.

The CD opens with its title track, “Big Dark City,” a tune with a good steady beat that feels to me like the pulse of an eternal summer. The song takes place on a Sunday night, when you’re trying to hold on to the weekend, opening with the lines “Turned on the lights so I could see what I was looking for/Grabbed some cash and headed out for maybe just one more/And I ain’t really been to sleep for very long just yet/I’m a couple drinks ahead of you, I bet.” I’m definitely into this song. And it’s followed by a slightly faster and harder rock tune, “Dawn Come And Gone,” which makes me feel like I should be out dancing at a bar with a carefree crowd of friendly strangers. It’s driven by the guitar and by Sam Marine’s wonderfully gruff vocals. Ah, night doesn’t last forever, no matter how much we might it want it to. “Now the sun is shining/Dawn come and gone.”

“Freeze ‘Em Out” has something of an early Tom Petty feel, and is another strong track. “If you can give me just a second just to think so I can figure it out.” And I like this line: “Now all I need is a distraction just to keep the words from coming out.” Sure, it’s pretty straight-forward rock, but the lyrics aren’t lacking substance as a result. And that’s followed by a slower, more serious-sounding song, “I’ll Soon Be Gone.” “My face has no expression, my shake is true and firm/I’d gladly lend a hand, but only on my terms/And don’t ask me where I came from, ‘cause I’ll soon be gone.” This one has a touch of country, and apparently was also included on Sam Marine’s first album (though a different version). The CD then concludes with “Mike Lee,” which also has a bit of country to its sound, and which might be my favorite track on this disc. “Said he’s gonna head a little north to stay in the south/Until then, he’s just passing time for now/Mike Lee/If you get along with him, you’ll get along with me.” And I appreciate these lines: “All we’ve done all night is ride around/Still, there’s plenty more to see in this college town.”

CD Track List
Big Dark City is scheduled to be released on November 17, 2017.
Posted by Michael Doherty at 7:30 PM