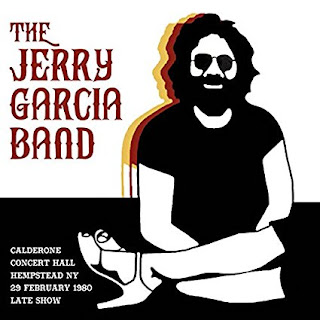 Sometimes after a long day of work, the only things that will satisfy me are a cold beer and some Jerry Garcia Band music. I’ve had a week of such days, and turned to a two-disc set titled Calderone Concert Hall Hempstead NY 29 February 1980 Late Show. No, not a very imaginative title, but an accurate one. It’s another of those unofficial releases based on radio broadcasts, and it includes the complete late show that The Jerry Garcia Band performed that night. Though it’s a radio broadcast, the opening tuning is included, which I appreciate (often that is cut). The crowd is clearly excited. And Jerry leads off the late show with “How Sweet It Is (To Be Loved By You).” The sound might not be perfect, but Jerry’s voice sounds great. “I want to stop and thank you, baby.” Interesting to hear this version from a time before Jaclyn LaBranc and Gloria Jones joined the band on backing vocals. I miss them here at times, but it’s still a good version. They keyboard lead part is strange, with a very electronic sound, a sound I don’t really associate with Jerry Garcia Band. But Jerry’s lead is exactly what I’m looking for. And this song makes me think of that special someone in my life, a person I want to celebrate the way this song celebrates that unnamed woman. The band, by the way, at this time consisted of John Kahn on bass, Ozzie Ahlers on keys and Johnny DeFonseca on drums. No backing vocalists. Ozzie Ahlers played keys with Jerry Garcia for only a year or so, and Johnny DeFonseca was with the band even less time.

After a pause, Jerry follows that with a cover of Bob Dylan’s “When I Paint My Masterpiece.” When the Grateful Dead did this song, it was Bob Weir who sang lead, so it’s cool to hear Jerry’s take on it. (You can also hear him sing this one on Santa Cruz Blues.) The band gets a nice easy-going jam going, but the lead keyboard section still seems odd to me, that electronic sound seeming to come on suddenly, as if popping in from another concert. The jam after the next verse picks up some steam and Jerry really starts to take off. Man, I love the way Jerry delivers certain lines, like “On a train ride so bumpy that I almost cried.” The way he dips low for “cried” surprised me. He did that on a couple of other lines too.

But for me, things start to get really good with “Russian Lullaby.” Jerry’s take on this Irving Berlin song is so cool, sometimes surprisingly smooth. The band strikes a kind of delightful tone, with a smoky jazz feel and then switching to a fun, peppy old-time feel, all flowing so well. And the keyboard does not strike me as out of place here. In fact, I love that lead section on keys. And it’s followed by a bass lead by John Kahn, which is wonderful. Jerry Garcia Band really is going in a jazz direction here, with each musician taking a turn at a solo (except there is no drum solo). The bass solo is allowed to go on for a while, John Kahn given a chance to strut his stuff, and this is a highlight of the first disc.  Of course, there is plenty of excellent stuff from Jerry on guitar. This track is a delight from start to finish. Then Jerry Garcia Band turns to reggae for a fun cover of Jimmy Cliff’s “The Harder They Come.” You get the sense Jerry Garcia is trying to keep it relatively quiet and restrained at the beginning, holding back a bit so that he’ll have a place to go to. And yes, he gets there, his guitar rising and singing over that good groove. The keyboard part, once again, initially catches me off guard, but soon I’m into it. The first disc contains nearly the first hour of the show.

Robert Hunter was one of the two main lyricists for the Grateful Dead, co-writing (with Jerry Garcia) songs like “Uncle John’s Band,” “Eyes Of The World” and “Ripple.” He’s also released several albums of his own, including Tiger Rose. The second disc opens with Robert Hunter joining The Jerry Garcia Band for two songs. Jerry introduces him: “We’re gonna get Robert Hunter out here and have him sing some songs.” The first song they do is the title track from Tiger Rose, which is a whole lot of fun. It takes a second for his vocal microphone to come on, but this is a really good version. “Come on and show me something I don’t know.” In addition to vocals, Robert Hunter plays harmonica on this tune. They follow that with a powerful rendition of “Promontory Rider.” These two tracks are the main reasons I purchased this two-disc set, and certainly they are highlights. I still have the Robert Hunter material on cassette, and I hope someone re-issues these albums soon. I think the CD versions are currently out of print.

After Robert Hunter exits the stage, Jerry Garcia gives us a good “Dear Prudence.” His guitar work during the jam is particularly wonderful and expressive. The ending is a bit abrupt and awkward, and that’s actually the end of the set. I love that this disc includes the crowd noise before the encore. Often that is cut, even on the official releases, or at least shortened. But here we get the whole thing, which gives us a stronger sense of being there. The encore is an absolutely delightful rendition of “Midnight Moonlight.” I love Jerry’s guitar here. But, hey, does it remind you at all of “Throwing Stones,” just that one repeated phrase, or is it just me? This two-disc set contains no radio station identifications. There is an outro at the end, but it was done from the stage, as we hear the crowd react.