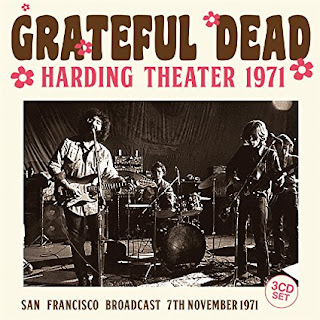 Ah, early 1970s Grateful Dead. It’s hard to beat it. Harding Theater 1971 is a three-disc set containing the complete show the Grateful Dead performed at the Harding Theater in San Francisco on November 7, 1971. It’s another of the releases taken from radio broadcasts, but it’s a good package, with liner notes written by someone who is actually familiar with the band (sometimes they’re not), though it might be that portions of those notes were lifted from a Grateful Dead fan website. Anyway, it’s an excellent show, and the radio station identifications always come between songs, never over the music.

The first disc, at nearly 79 minutes, contains most of the first set. Yeah, this was a nice long show. The disc opens with some tuning and stage banter from Bob, Jerry and Phil, who address the radio audience. Jerry tells them they’ll hear the music faster than the folks inside the venue. They then get things off to a great start with “Truckin’,” which features a good jam. Bob then mentions that the monitors have cut out, and they don’t know what to do. “Hey, anybody out there?” They refer to Bob’s yellow dog story. As annoying as I’m sure it was to have their monitors cut out, from my perspective all these years later, it’s a good thing, because we get plenty of stage banter, something we didn’t get much of in the later days. And the radio station doesn’t interrupt it or cut away, which is wonderful. Eventually, they get things working and go into “Brown-Eyed Women.” But then the feed to the radio station becomes problematic, and the song cuts out a few times at the beginning, for just a second each time, and a few more times at the end, and again between songs.

Bob introduces “Beat It On Down The Line” as “the drummer’s choice.” And they begin it with sixteen beats (“Sweet sixteen”), many more than usual. This is a seriously energetic and fun rendition. And after it, Bob announces that the monitors have cut out again. Those technical difficulties lead the band to play “Hide Away,” an instrumental tune written by Freddie King. This was the first time the band ever played it, and actually they would play it only one other time, eighteen years later, when once again they were suffering technical troubles. It’s a good, full version here – reason enough to own this three-disc set.  Technical troubles may be at an end, and the band goes into “Sugaree,” with some interesting vocal phrasing by Jerry. He’s clearly having a good time, and the results are good for us. “Sugaree” is followed by “Jack Straw” and a rockin’ “Tennessee Jed.” There is a station identification after “Tennessee Jed.” It takes a moment to get “Cumberland Blues” underway, but it ends up being an absolutely excellent rendition. More stage banter and tuning follow before the band goes into “El Paso.” Bob’s vocals seem a bit low in the mix, but it’s otherwise a good version. It’s followed by a high-energy rendition of “Big Railroad Blues.” The first disc then concludes with a passionate “Comes A Time.”

The second set opens with “Ramble On Rose.” There is a sound problem at the start, but it seems like it’s the radio feed rather than something from the stage. That’s followed by a sweet rendition of “Me And Bobby McGee.” Someone then calls out a request for “Jack Straw.” The response: “We already did it.” What they choose next is “Loser.” It’s a seriously good version, and is followed by “Sugar Magnolia.” Bob forgets some of the lyrics, but it’s still a fun version and should get you dancing around your home or car or wherever you listen to this disc. It feels like a set closer, but the second set is really just getting going. What follows is the big juicy section of the show, beginning with “Dark Star.” It’s mellow at the start, the band is in no hurry, just exploring, see where it takes them, nothing to prove. And as you might expect, that leads to a damn good version. There are hints of “The Other One,” and then a drum solo leads into that song. And what a delicious rendition! The band does only the first verse, then gets into some spacey territory before emerging cleanly into “Me And My Uncle.” And then the moment they finish “Me And My Uncle,” they are right back into “The Other One,” and back into a good spacey jam before pounding into the second verse. After “The Other One,” the band stops to fix a broken string, and there is a longer radio station identification. Then, after a bit of tuning, the second disc comes to a close.

The third disc contains the rest of the second set and the encore. It begins with an energetic “Deal,” followed by a pretty rendition of “Brokedown Palace” and then “Playing In The Band.” This is one of the best versions of “Playing In The Band” from 1971. The song was still fairly new, and most versions from this time lacked those wonderful long jams you’d get later on. But this one has a good bit of jamming. There is another radio station identification after that song. During more technical troubles, Bob does his “dead air” joke, and Jerry asks, “Get it?” They engage the audience in some jokes. The band then gets things going again with a rockin’ rendition of “Casey Jones.” The second set concludes with “Not Fade Away” into “Goin’ Down The Road Feeling Bad” back into “Not Fade Away.” The band is on fire here, particularly during “Goin’ Down The Road Feeling Bad.” Some of the crowd noise is cut before the encore. The encore is “Johnny B. Goode” and a wonderful “Uncle John’s Band.”

Harding Theater 1971 was released on February 12, 2016 through Left Field Media.
Posted by Michael Doherty at 8:31 PM