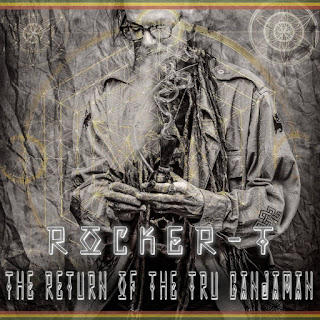 Though I do like reggae, I don’t listen to a whole lot of it, partly because it sometimes begins to feel repetitive to me. But Rocker-T (Toby Petter Herskind Sorensen), on his CD The Return Of The Tru Ganjaman, does some interesting and delightful things with the form. And he’s joined by several guest musicians, including Mykal Rose and Ras Indio. This album really grew on me. Yes, it deals with a lot of the same subjects, same themes as most reggae music – peace, marijuana, and so on – but so much of it feels new here, even as those particular subjects are tackled. The main thing is that this music makes me happy, and we can all use some of that these days.

“Yankee & Yardee” is reggae with a heavy dance beat. I have absolutely no idea what he’s singing here, at least for much of the song, but I’m enjoying the groove. And toward the end he calls out a few familiar names: “Sugar, Dennis and Gregory/Peter, Bunny, Bob Marley.” Folks that current musicians acknowledge a debt to. Gappy Ranks (Jacob Lee Williams) then joins Rocker-T on “Need Some,” which has more of a familiar feel and has a positive sound. Mykal Rose and Mr. Williamz join him for “Disgrace.” “Why is it that they can’t unite?/Why is that they can’t stand together?” Good questions, and presented over a catchy groove.

The song that really got me excited about this disc is “Herbalist.” It is so catchy, so joyful, and it features Mama-T on vocals. The first time I listened to this album, this is the song that grabbed me, the song that turned my day around with its positive, bright sounds. It’s a wonderful track, dedicated to the herbalists “who bring all the healing,” and knocking the ridiculous war on drugs. “Let go the herbalist, you let him be/Let go the herbalist, you set him free.” And of course you can dance to it. So there. It’s followed by another stand-out track, “Man Ah Warrior.” It has just a bit of a New Orleans Dixie jazz vibe that makes me love it. It’s an overall fresh sound, and by this point in the disc I was totally in.

Bass player and vocalist Skip Wicked (Spencer Burton) of Indubious joins Rocker-T on “Chillum,” an unusual and excellent song with something of a tribal rhythm and some impressive vocal delivery. I want to lose myself in the beat, close my eyes and dance until the walls disappear. It has that kind of power, you know? And it’s followed by yet another highlight, “Garden Of Goodness.” It’s funny that a song celebrating marijuana should begin with the sound of someone coughing. But there you have it. This song is a lot fun, and has a delightfully fresh and bright feel. “In the garden of goodness/There’s a weed for releasing my stress/Oh yes, it’s the best/In the garden of goodness/Marijuana caught my interest.” Jah Wave and Ras Indio join Rocker-T on this track. Then Prezident Brown joins Rocker-T on “Blazing Everyday,” obviously another song about smoking marijuana.

Just a couple of months before the release of this CD, Rocker-T put out a disc titled Tru Ganjaman: The Remixes, which contains twenty-three versions of “Tru Ganjaman.” If that CD didn’t provide enough of that song for you, this CD gives you “Tru Ganjaman Megamix,” which I suppose is the title track. Oddly, I don’t find this track nearly as compelling or enjoyable as everything that precedes it. This one ends with coughing. And the tracks that follow it are all remixes of earlier songs, including two versions of “Real Singer Smoker” (I prefer the Phibes Remix) and two versions of “One Million Matches.”

CD Track List
The Return Of The Tru Ganjaman was released on June 17, 2016. By the way, the digital release of this album contains three more tracks.
Posted by Michael Doherty at 11:04 PM