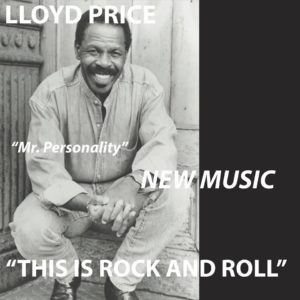 Lloyd Price is an important figure in rock and roll and rhythm and blues, releasing records from rock’s very beginning, songs like “Lawdy Miss Clawdy” (which he also wrote), “Just Because,” “Stagger Lee,” and “Personality,” the last earning him the nickname Mr. Personality. I can’t imagine what the world would be like without these recordings, and I’m far from alone in feeling that way. Lloyd Price was inducted into the Rock And Roll Hall Of Fame in 1998. He was also inducted into the Louisiana Music Hall Of Fame. But even now in his eighties, Lloyd Price’s incredible career continues. He just released a new CD, This Is Rock And Roll, which finds him looking backward as well as forward, delivering wonderful new renditions of some classic songs. This disc includes liner notes written by Lloyd Price, which is cool. But I have to mention that there are multiple grammatical errors and such in those liner notes. Ordinarily I wouldn't mention this, but there are so many that I have to wonder who was in charge of proofreading. Anyone? I hope those will be corrected in the next printing, but of course they don’t detract from the music at all.

The album opens with “I’m Getting Over You,” a good tune with a certain pop energy and some nice work on sax. Listening to Lloyd Price’s vocals on this track, I would guess he was at least two decades younger than he is. “Took your picture off the wall/I’m not waiting on your call/If you really want the truth/I’m not missing you at all.” I also like the backing vocalists echoing him, “I’m getting over you.” That’s followed by a deliciously funky tune, “Nobody Loves Anybody Anymore,” urging people to set aside their differences and care for each other, a timely number. “Nobody helps anybody/If it’s gonna cost them a little money/Nobody helps anybody/If it’s gonna take them out of their way.” This one features some wonderful work from the horn section, plus some good percussion. And check out these lines: “I’m not trying to put you down/Or place the blame on you/For there are lots of people that are in command/They’re not doing all they can do/Nobody helps anybody anymore.” This song is, for me, one of the disc’s highlights.

Lloyd then gets a bit mellower (but just as passionate) with “The Smoke,” in which he tells a woman, “It’s the little things I’ll do/Girl, when I’m lying next to you/That will take your breath away/You’ll be begging, begging me to stay/And, girl, you know I’ll do/Whatever you want me to.” Oh yes, how could you doubt him? Lloyd follows that with a new version of “Bad Conditions,” a song he released in 1969. It’s now titled “Our World,” and somehow is even cooler than it was before, and just as relevant. “We’re living in bad conditions.”

Lloyd Price delivers an unusual rendition of “Blueberry Hill.” It has something of a loose, smooth, jazzy vibe, with some cool work on bass. He follows that with an excellent rendition of Jimmy Reed’s “Baby, What You Want Me To Do” (sometimes referred to as “Peepin’ ‘N’ Hidin’”), recorded live in New York. This is a song that Josh Lederman has been doing in the Cambridge-Somerville All-Stars and The Country Pleasures, and so it’s been in my head a lot lately. This version by Lloyd Price features some great work on keys, and I love the horns and harmonica. And then there is an excellent lead guitar section. Lloyd adds “This Is Rock ‘N’ Roll” to the rendition, with a cool call-and-response section, making this the title track. There is great energy here. This track is one of my favorites.

“I Can’t Help Myself Interlude” is a brief big band instrumental number that leads straight into “I Can’t Help Myself,” which is also known as “I Can’t Help Myself (Sugar Pie Honey Bunch),” a hit for The Four Tops in 1965. Lloyd Price gives a little nod to Blue Swede’s “Hooked On A Feeling” at the beginning of his version, and returning to it a few more times later in the song. Lloyd also gives his own spin to “Will You Still Love Me Tomorrow,” a song written by Gerry Goffin and Carole King and originally a hit for The Shirelles. His version is a bit slower, with a romantic feel. That’s followed by a rendition of Fats Domino’s “I’m Walkin’” that features horns and piano, and has a big band groove, and works quite well, with a delightful confidence to Lloyd Price’s delivery, as if his vocals themselves could strut. The CD then concludes by going in an unexpected direction with “Belly Movement,” a song for belly dancers, with plenty of good percussion.

CD Track List
This Is Rock And Roll was released on September 22, 2017 through Universal Music Group.
Posted by Michael Doherty at 3:44 PM