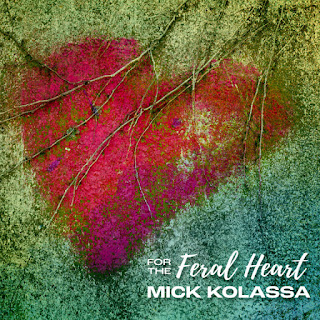 Mick Kolassa’s pace is certainly not slowing. In August, he released an excellent album titled They Call Me Uncle Mick! and followed that just a few months later with For The Feral Heart. And this latest release contains mostly original material. As the title and the album’s cover suggest, the tracks on this album deal with love. And is there anything more important? I think the pandemic has made most people take a new look at their priorities, and, big surprise, Love has once again come out on top. Mick Kolassa, in addition to the vocals, plays acoustic guitar and electric guitar on this album. Joining him on this release are Jeff Jensen on guitar, Bill Ruffino on bass, Rick Steff on keyboards, Tom Leonardo on drums, and Andrew McNeil on drums, along with some guests on certain tracks. By the way, all net proceeds from sales of this album go to The Blues Foundation, and specifically to the HART (Handy Artists Relief Trust) Fund and Generation Blues.

The album opens with an original number, “Running To You.” This song is about how when things are not going well in our lives, we don’t turn to preachers and politicians, but rather to our sweethearts. “If I were lonely, if I was down/I’d come running to the best thing that I’ve found.” Oh, yes, when I’m feeling down, I want to go running to my girlfriend, who at this moment is three thousand miles away. It just doesn’t feel right being apart from her, especially when I’m feeling blue. And that’s what Mick Kolassa is talking about here. He sings, “You got some kind of magic, and that’s the honest truth.” Yeah, what is it about that special someone that he or she has this effect on us? Not sure there’s a name for it, but I suppose “magic” works. This song has a delicious groove. The way it moves, it feels like it is in motion toward the woman. The song itself is propelling us to our love. It features some excellent work on harmonica, as well as some nice stuff on keys. Mick Kolassa follows that with an another original composition, “Elegant Angel,” a mellower number with a kind of cool and laid-back attitude. And again, he is singing the woman’s praises: “Her ways are graceful/Even when it’s painful/Her smile is playful/But you never want to get in her way.” Nice! This track features some good work on guitar. Mario Monterosso joins Mick Kolassa on guitar on this track, and Carl Casperson is on bass, and TJ Bonta is on keys.

The first of only two covers on this album is “Feeling Alright,” written by Dave Mason and first recorded by Traffic. It has been covered by a lot of artists over the years, and probably the most well-known version is that by Joe Cocker. Mick Kolassa delivers a good rendition. I like the “No, no, no” backing vocals. Tullie Brae provides backing vocals on this track. The musicians jam on this groove, and there is plenty of good stuff on guitar. There are more cool vibes on “Love Ain’t Supposed To Make You Cry,” a slow, kind of sexy blues number in which he wonders just went wrong. “I used to wake up with a smile/Now I just can’t stop the tears/She made my heart feel new/Now it’s needing repair/This ain’t right/Love ain’t supposed to make you cry.” I like that when he sings “Now I just can’t stop the tears,” he sounds somewhat surprised by this development, which gives us the sense that this is new. He is living this. This isn’t recounting some old tale. And so he has us right with him. He is still hopeful, as he asks, “Will she change her mind?” But he quickly follows that question with another: “Could I trust her if she does?” This is one of my personal favorites from this album. It contains some great work on electric guitar. As on “Elegant Angel,” Mario Monterosso pays guitar on this track, Carl Casperson is on bass, and TJ Bonta is on keys.

On “Easy To Love,” Mick Kolassa tells us, “I’m suffering some affliction/Don’t know what it could be/I think it’s got something to do/With that something you do to me.” Ah yes, it’s that magic again. But this time it has turned on him, making him worry that he won’t get to see this woman who has cast her spell on him. This song has a groovy, jazzy vibe. Then “I Keep Looking” has a catchy rhythm at the start, a more cheerful vibe, and a rather sweet, wonderful vocal performance. Here are the opening lines: “I keep looking for a reason not to love you/Life would be so simple if I wasn’t always thinking of you/I could spend my time with other things on my mind/Strolling through this world without a care.” Here he refers to the magic again, singing “How different things might be without this spell I’m under.” Really, that is it, isn’t it? And then he touches upon that again, singing, “This strange and special love, it’s magical and rare.” Ah, if only we knew what it was. But for me, it’s like the woman has physically become the most important part of me, and I’m not sure my body could continue walking without her. “My mind can’t go a minute/Without you in it.” Yes, this song is perfect.

“I Left My Heart In Birmingham” begins more in the folk realm, with some gentle, pretty work on acoustic guitar, the song having a sweet, sad sound. This one features some really nice, effective work by Alice Hasan on violin. And you can hear the sadness in Mick Kolassa’s voice as he sings, “I just can’t help it, sometimes I feel so alone/Days seem so long when we’re apart.” Yes, they certainly do. I’m not sure what to do with myself sometimes; it feels like whatever I do, if she’s not there, it’s just wrong. But yet, as he sings here, “Now, I’m not complaining, please understand/You’re only bringing joy to this man/But I can’t stop this need to see your face/My heart and I need to be in the same place.” This is a beautiful song. “Love In My Size” also begins with some pretty work on acoustic guitar. Sure, this one is a bit goofy, a bit corny, but that’s all right. “I didn’t know they made love in my size/I thought I was too hard to fit/But I just get so lost in your eyes/I know this is real, this is it.”

Mick Kolassa turns to a reggae sound for “Forever Sometimes,” a song about a more casual affair, a couple that gets together on occasion, and in those moments these two are completely dedicated to each other. It’s a kind of playful number; he even laughs as he delivers the song’s title line early on. When the song kicks in, a minute or so in, it turns from reggae to become jazzy, a nice surprise. The song then returns to reggae. And, you know, considering its subject, this song is strangely, and delightfully, sweet. Then “Hold On” has an island vibe. “Hold on, we’re going to make it through/Hold on, hold on to me and you.” Tullie Brae joins Mick Kolassa again on backing vocals for this one. That’s followed by “Run Away With Me,” the album’s final original composition, which has a gentle, sweet vibe. This one features Alice Hasan again on violin, and again she delivers some beautiful work, particularly during that lead halfway through. “And spend a little time alone, time alone, just you and me.” The album then concludes with a cover of “As Time Goes By.” It’s always good to hear this classic, and Mick Kolassa does a nice job with it. This track features some good stuff on both keys and guitar. “Moonlight and love songs/Never out of date.”

For The Feral Heart was released on December 2, 2022 on Endless Blues Records.

Posted by Michael Doherty at 3:07 PM