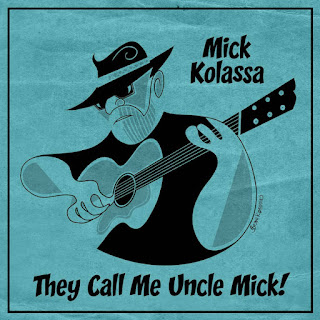 Blues man Mick Kolassa has certainly kept busy, releasing three albums in the last eleven months. The latest, They Call Me Uncle Mick!, contains a combination of original material and good choices of covers. The music here is acoustic blues. As is mentioned in the album’s liner notes, “No amplified instruments were used on any track, making this album purely acoustic.” Oh yes, acoustic and so damn good! Some talented musicians join him on this album, including three harmonica greats – Eric Hughes, Watermelon Slim and Bobby Rush. Jeff Jensen is on guitar and percussion, Tom Leonardo is on drums, Carl Caspersen is on bass, Rick Steff is on piano, and Alice Hasan is on violin. There are some other guests on various tracks.

The disc opens with a totally fun rendition of Bo Carter’s “My Pencil Won’t Write No More,” a track that immediately puts me in a good mood. It has a loose, cheerful vibe, and features some delicious work on both guitar and harmonica. Eric Hughes plays harmonica on this one. Plus, Mick Kolassa delivers a seriously good vocal performance, adding some playful touches. It is a joy from beginning to end. That’s followed by an original number, “Wasted Youth,” a song that Mick Kolassa included on another album last year, where it functioned as the title track. This new version has a different feel, with that cool acoustic blues sound. Both renditions are really good, but I prefer this one. It also contains some excellent work on harmonica, this time by Bobby Rush. There is also some great stuff on guitar. Brad Webb plays slide guitar on this track. This song’s rhythm is part of our biological structure. The blues are part of us, you know. This track features a great jam, yet it is the vocal performance that I love most here. This is one of my favorite tracks.

People have been covering John Prine a lot more than usual in the days since his death near the beginning of the pandemic. On this album Mick Kolassa covers “Daddy’s Little Pumpkin,” a nice choice. This song is from The Missing Years, one of my personal favorite John Prine albums. I had a folk radio program up in Oregon in the 1990s, and I played tracks from that album quite often. Mick Kolassa does a good job with this song. Eric Hughes is back on harmonica, delivering some expressive work. “Well, I’m going downtown, gonna rattle somebody’s cage.” That’s followed by “Used To Be,” an original composition. In this fun, playful tune, Mick Kolassa sings, “The US postal service sure ain’t what it used to be.” Ah, no kidding! And the song also contains this bit of truth: “Now it wasn’t perfect before, but it seemed okay/Everything keeps changing, I guess it just works out that way.” This track contains some excellent stuff on guitar and piano. Doug McLeod joins Mick on guitar on this track. This is a song for anyone who has lately found himself or herself uttering, “Things aren’t what they used to be.” And Mick turns the song onto himself at the end: “I got hearing aids to help me listen/Glasses to help me see/Hey, I guess now I ain’t even what I used to be.”

Mick Kolassa then delivers what might be the coolest rendition of Hank Williams’ “I’m So Lonesome I Could Cry” you’ll ever hear. It is bluesy, of course, and has an undeniable allure. And Alice Hasan’s work on violin is fantastic. Plus, this track features some excellent work on guitar. This is certainly another of the disc’s highlights. Doug McLeod returns on guitar for the original number, “My Woman She’s So Mean,” another cool track. Here Mick Kolassa sings, “She’s so damn mean, you know one time I saw her scare a snake.” Oh man, this woman makes the worst the rest of us have dated seem sweet by comparison. So count our blessings, I suppose. I dig this track’s groovy jam. “I told her that I loved her/Man, that only made her sore.”

Like a lot of folks, I first heard “Woodstock” done by Crosby, Stills, Nash & Young. It was a little later when I heard Joni Mitchell’s own version and was surprised at how different it was. I always felt there was something bluesy about it, so it makes perfect sense for Mick Kolassa to cover it. Of course, his version is completely different from the way Joni Mitchell presented it. It is also quite different from the CSNY version. “He said, ‘I’m going down to Yasgur’s farm/Going to join a big blues band,’” Mick Kolassa sings in this rendition. Watermelon Slim joins him on vocals and harmonica for this track. Brad Webb is on slide guitar. “And I don’t know who I am/But life is for learning.” That’s followed by “Why?” In this one, Mick Kolassa sings, “You tell me lies, you try to make me think they’re true/It seems like you don’t love nobody, love anyone but you.” Well, this song might be about a mean woman, but those lines could easily also address a certain former president (and probably quite a few others in his party). This track features some delicious work on guitar, as well as some good stuff by Eric Hughes on harmonica.

The album’s final cover is “Sunny Side Of The Street,” one that immediately lifts the mood. Mick Kolsassa does such a great job with it. It feels like the song was waiting for him. His vocals here couldn’t be better. And there is more wonderful work on violin. Plus, John Whitman joins on vibraphone. Then “Bless His Heart” will pull you onto the dance floor, and make your smile all the larger. Yeah, it is another fun one. For those who might not know, adding “bless his heart” to the end of a description of someone is a way to show your disdain for that person in the south, or at least condescension. For example, Mick Kolassa sings, “Always paid attention only to himself/He thought he was a winner/He was lost from the start/And he never had a clue/Bless his heart.” The album then concludes with “The Cheese Song,” which has the lines, “But as I search high and low/It’s hard to find any good songs about cheese.” I took that as a challenge. I figured, come on, there must be at least a dozen good cheese songs. But you know what? I couldn’t think of any at first. What kept coming to mind was the Cheese Shop sketch from Monty Python, and then the trailer for This Is Spinal Tap. But neither of those are songs. Then I thought of Chocolate And Cheese, a cool album from Ween, but again not a song. But Ween did have a song titled “Pork Roll Egg And Cheese.” So there. Anyway, Chris Gill joins Mick Kolassa on slide guitar on this track. “Oh man, do I love cheese.”

They Call Me Uncle Mick! was released on August 18, 2022 on Endless Blues Records.

Posted by Michael Doherty at 8:52 PM