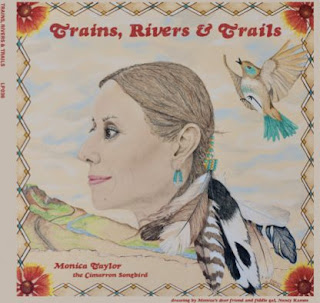 There is something incredibly appealing about this album’s title, especially now. Who doesn’t have the urge to get away, to hop a train, to take a canoe down a river, to hike some beautiful mountain trail? To step away from the news and the horrors of our days is immensely desirable. Monica Taylor is here to help us escape, if only in our minds. Trains, Rivers & Trails, her new album, contains a mix of original material and good choices of covers. Joining her on this release are Travis Fite on acoustic guitar, electric guitar, dobro, mandolin and backing vocals; Jared Tyler on acoustic guitar, electric guitar, dobro, banjo and backing vocals; John Fullbright on piano, organ, accordion and vocals; Jake Lynn on drums and percussion; Casey Van Beek on bass; Luke Bulla on fiddle and mandolin; and Roger Ray on pedal steel. There are also some guests on various tracks.

The album opens with an original number, “The Sound Of A Train,” a beautifully sad song in which Monica sings, “Your memory’s like the sound of a train/In the middle of the night.” That wonderful work on fiddle adds to that feel. It is interesting that Monica Taylor describes the person’s memory in vastly different ways, making us wonder if the memory is different for her at different times, and if so, just how accurate the memory is. For she also sings, “Your memory’s like the silence/Of the forest,” which is markedly different from the sound of a train. But the line that really gets to me is “But I’ll still think of you when I hear the word goodbye.” That’s a great line. And of course we can’t help but insert our own ideas of what has happened to this person. Monica Taylor follows that with the album’s first cover, John Hartford’s “Gentle On My Mind.” A lot of artists have recorded this song over the years. I think the first version I ever heard was the Glen Campbell recording, which is still one of the best. Here Monica Taylor delivers a sweet, friendly, pretty rendition, her voice supported by some lovely work on fiddle.

We then return to the original material with “Salty Tears.” A song about tears is a song for our times, isn’t it? What is nice is that the song picks up a bit a minute or so into it, and we travel with the vibe of the song, perhaps wiping away our own tears in that moment, for there is something uplifting about this song. It is a song that also deals with memory. “Now my mother, my father, and two sisters have left/This cold trail for good/But for me I must walk/For the ones who cannot/If I could flee, you know that I surely would.” Tanya Comingdeer provides some beautiful backing vocal work on this track. That’s followed by another original composition, “Rescues.” This song provides a good, and tough message for these days when there is so much hatred, so much division: “Give to an ear to the story, hard and true/From a friend or a foe that hates you/Give a heart to the one who beats you up/With words so cruel, no gentle touch/Give a hand, give a heart, because we’re all rescues.” This track includes some wonderful work on fiddle. The music turns more cheerful with a cover of “Down In Louisiana.” Monica Taylor adds some extra lyrics: “Well I got me a fella, he’s a Cajun man/He’s a real hot lover with a real good hand/Makes the best gumbo in Cajun land/Down in Louisiana.”

I still remember the first time I saw the movie Easy Rider. I was thirteen, and it definitely made an impact. Of course, a certain amount of its appeal was in the music chosen for the film. Everyone remembers “Born To Be Wild,” and probably “The Pusher” from that great opening sequence, but for me the best tunes were the folk songs, “Wasn’t Born To Follow” and “The Ballad Of Easy Rider.”  On this album Monica Taylor gives us a pretty rendition of “The Ballad Of Easy Rider,” a song that isn’t covered all that often, and the track that initially got me excited about this release. “The river flows/Down to the sea/Wherever that river flows, that’s where I want to be.”  There is some really nice work by John Williams on harmonica on this track. That’s followed by “Way Over Yonder In The Minor Key,” here listed simply as “Minor Key.” It is a song with lyrics by Woody Guthrie, but with music written much later by Billy Bragg, and was originally included on the first Mermaid Avenue album put out by Billy Bragg and Wilco. Several other artists have covered it, including Ellis Paul and Terri Hendrix. This version by Monica Taylor is presented as a duet, with John Fullbright sharing lead vocals with Monica Taylor. It’s a really good rendition, featuring some nice work on accordion.

“When You Let Your Love Light Shine” was written by Bob Childers and Monica Taylor, and is a song about getting through the tough times, and has an optimistic bent. Here is a taste of the lyrics: “Things get bent, things get broke/Things get tough, that ain’t no joke/Somehow it always fall back in line/When you let your love light shine.” It’s not always easy, but we have to remember to do that. Monica Taylor’s vocal approach here is sweet and gentle. That’s followed by “Just Came In To Say Goodbye,” written by Monica Taylor and Patrick Williams. This pretty country song features some nice work on pedal steel.  Then “Train Take Me Away” has a brighter, more cheerful sound, and features some wonderful work on fiddle. There is always something appealing about riding a train, though I would not be happy if a train took me to any of the three states she mentions visiting in this song – Alabama, Kentucky, and Texas. Yikes. That would be a nightmare train for me. But it’s a good song, featuring some excellent work by Thomas Trapp on guitar. The album concludes with “The Ocoee Love Song,” which features some pretty work on mandolin. Shelby Eicher plays both fiddle and mandolin on this track, and Nathan Eicher is on upright bass. “If there’s anything to bring you back to the mountains/It’s the rivers, my love, and the springtime/So flow, my Ocoee, flow down through the Blue Ridge.”

Trains, Rivers & Trails is scheduled to be released on July 29, 2022 on Horton Records.

Posted by Michael Doherty at 10:44 PM