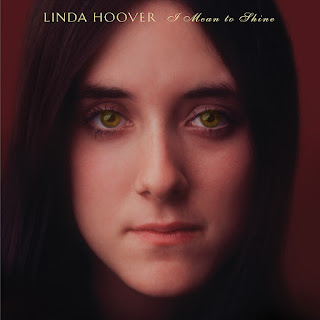 Linda Hoover recorded what was supposed to be her debut album, I Mean To Shine, back in 1970, when she was nineteen years old. But it wasn’t released, because of a disagreement over publishing rights. Fortunately, she kept a copy of the tape for herself, and that tape was restored and is now finally getting a release. Steely Dan fans in particular are going to find this album exciting, because that band, though still nearly two years away from officially forming, backs her on these tracks. Yes, Walter Becker plays bass and electric guitar, Donald Fagen is on keyboards, Denny Dias is on acoustic guitar, and Jeff Baxter is on electric guitar and steel guitar. Becker and Fagen also wrote many of the tracks, and did the arrangements. Joining them are Eric Weissberg on acoustic guitar, John Discepolo on drums, and Jerome Richardson on saxophone, along with members of The Dick Cavett Orchestra on strings, brass and woodwinds. In addition to the Becker and Fagen compositions, this album features covers of songs by Stephen Stills and The Band, as well as three original songs by Linda Hoover. And though Linda Hoover continued to perform after this record was shelved, and released a good album in 2018 titled Another World, it’s difficult to keep from wondering how her career would have progressed had this album been released in 1970.

The album opens with its title track, “I Mean To Shine,” one of the tracks written by Donald Fagen and Walter Becker. The year after this track was recorded, Barbra Steisand released her own version on Barbra Joan Streisand, with Donald Fagen playing on that recording as well. It should come as no surprise that Linda Hoover’s version is much better. I prefer her vocal work, and I love the brass. “This day I realized/The time we shared is gone/New seasons come and change/The ground we stood upon.” That’s followed by “Turn My Friend Away,” a pretty song that has a more stripped down sound, her voice at first supported by acoustic guitar. It then builds from there, but maintains that soft, gentle base. I love the way her voice rises at certain moments.

“Roaring Of The Lamb” is a song that will be familiar to Steely Dan fans, for it turned up on some compilations of early material. This is an excellent rendition, featuring some nice work on strings. “And the roaring of the lamb/Then revealed its awesome powers/And the minutes turned to hours/No one's the same.” That’s followed by “Roll Back The Meaning,” a song that Fagen and Becker had recorded for the soundtrack to You’ve Got To Walk It Like You Talk It Or You’ll Lose That Beat. Linda Hoover’s rendition has a good country vibe, and features some nice work on electric guitar and a catchy bass line. She delivers a strong vocal performance here, and provides her own harmonies. Also, check out that work on drums toward the end. This, for me, is one of the disc’s highlights.

Then we get the first of three songs written by Linda Hoover. Titled “Autumn,” this track features an excellent vocal performance, and is another of my personal favorites. It has more of a folk vibe, and features some wonderful guitar work by Eric Weissberg. “Then your head on my knees/Your sleepy eyes will remind me too/Of my love for you/In autumn.” Then she gives us “Jones,” another song that was composed by Donald Fagen and Walter Becker. This one was also recorded by Thomas Jefferson Kaye, who included it on his 1974 record First Grade. Linda Hoover delivers a sweet rendition. “Now the only words I hear/Say my dreams will disappear/Or turn to clay/And either way/The days of alms have passed/There’s no more rainbows to be had.” Then Linda Hoover gives us “In A Station,” a song written by Richard Manuel, and included on The Band’s debut LP, Music From Big Pink. Linda Hoover’s rendition is fairly faithful to the original and features a pretty vocal performance. “Isn’t everybody dreaming/Then the voice I hear is real/Out of all the idle scheming/Can’t we have something to feel?”

The second of the album’s songs written by Linda Hoover is “Mama Tears,” one of the album’s most moving tracks. “Mama, I‘m sorry/For your sorrow/I know you cry/I hear you now and then.” Her powerful, passionate vocal performance is what really sells this song, but she is also clearly a talented songwriter. That’s followed by “City Mug,” which has a cheerful, light energy and features some good work on guitar. It has a different vibe from the rest of the album’s tracks, but it’s enjoyable. Linda Hoover then puts her own spin on “4 + 20,” a song written by Stephen Stills, and included on the CSNY album Déjà Vu. This has a somewhat lighter vibe than the original, not as somber, filling out the sound. I particularly like the work on keys. There are also horns. But for that powerful last line, most of the instruments disappear to give it more focus. The album concludes with its final Linda Hoover composition, “The Dove,” this one in the folk realm and featuring a beautiful vocal performance.

I Mean To Shine is scheduled to be released on CD on June 24, 2022 through Omnivore Recordings. There will also be a special vinyl release on June 18th, as part of the year’s second Record Store Day.

Posted by Michael Doherty at 3:23 PM