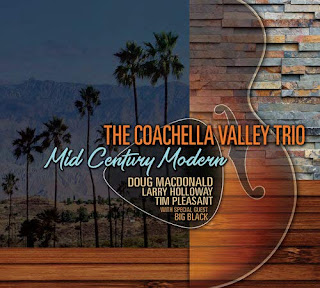 The Coachella Valley Trio consists of Doug MacDonald on guitar, Larry Holloway on bass, and Tim Pleasant on drums. The group’s new album, Mid Century Modern, contains a mix of covers and original material written by band leader Doug MacDonald. Doug MacDonald is one heck of a good guitarist. He has played in various band configurations (including quartets and big bands), and always finds a way to get things swinging, his playing having a lively and positive sound. He, Larry Holloway and Tim Pleasant have been jamming at a venue called AJ’s On The Green, located in Palm Springs, every Wednesday. And now Mid Century Modern gives those of us who don’t often out to Palm Springs a chance to enjoy a bit of the magic these three musicians create together. Joining the trio on several tracks of this album is Big Black on djembe.

The album opens with a cover of “My Shining Hour,” a song written by Harold Arden and Johnny Mercer for the film The Sky’s The Limit. This rendition has a wonderful groove, and some delicious guitar work that sounds like the instrument is dancing, and it all works to put a smile on my face, and remind me that humanity still exists in some positive form. When you get down about all the horrible things people are doing these days, it’s good to remember that people are also creating music like this. Halfway through, there is a good lead on bass. And there are also some brief drum solos, which I enjoy. But it is the guitar that really gets things moving. “My Shining Hour” is followed by an original composition, “Lance Or Lot.” Okay, yes, that’s a goofy song title, but I love the feel of this one. It has a bit of a laid-back groove and temperament, yet with also a certain confidence, creating a cool style and sound. It isn’t long before the bass takes over, and that lead section is one of my favorite parts of this track. It has this youthful, jolly kind of vibe that makes me think things are fine. You know? That’s followed by another original composition, “Cat City Samba,” which has a nice Brazilian rhythm and feel. The track’s title, I assume, is referring to Cathedral City, which is located in the Coachella Valley. This is one of the tracks to feature Big Black on djembe, and the percussion is a large part of this track’s charm, no question.

“Tram Jam” has something of an easygoing sound, particularly as it starts, like one out for a stroll. Then Doug MacDonald’s guitar takes off from there, following its own flight of fancy and taking us along with it. Things remain delightfully loose, and there is also a nice lead on bass. This is another original tune, written by Doug MacDonald. The trio then returns to cover material, beginning with a sweet rendition of “What’s New,” written by Bob Haggart and Johnny Burke. This track begins with just a bit of solo work by Doug MacDonald on guitar before the others come in. I like the charming, pleasant feel of this version. The bass and drums have a relaxed, late-night vibe, while the guitar lightly dances above them. The trio then delivers a cover of “Give Me The Simple Life,” a song written by Rube Bloom and Harry Ruby. It’s a cheerful number that features some fun, playful work on guitar. Big Black joins the group on djembe. Big Black also plays djembe on a cool rendition of “Stranger In Paradise,” a song from the musical Kismet. The rhythm created by Big Black and Tim Pleasant is largely what makes this track so enjoyable.

One of my favorite tracks is the trio’s wonderful rendition of Ray Noble’s “I Hadn’t Anyone Till You.” This one too features some really catchy work on percussion (Big Black again is on djembe), and I love that lead on bass. But it is the guitar work that really delights us on this one. The guitar has a friendly vibe, and dances about playfully. The instrument seems to have a life of its own, a personality, one you’d like to get to know. That’s followed by a version of Dizzy Gillespie’s “Woody ‘N You” that moves and swings, and features some excellent and impressive work on guitar. There are short percussion solos, which I love. Big Black is again on djembe. The song’s title is sometimes listed as “Woody ‘N’ You,” which you’d think would make more sense, but the title uses Woody Herman’s name as a sort of play on the phrase “Wouldn’t you” (and is sometimes listed as “Woody’n You”), rather than meaning “Woody and you.” The last track to feature Big Black is also the album’s final original tune, “Bossa Nueva.” This tune has a delicious rhythm, and it is this rhythm that gets the track going. The album then concludes with “The Way You Look Tonight,” a song that I love. This rendition moves at a quicker pace than usual, and swings, and features some exciting work on guitar. I also seriously dig that bass line. And with the inclusion of a short drum solo, it is no wonder that this is one of my favorite tracks. A great way to end the album.