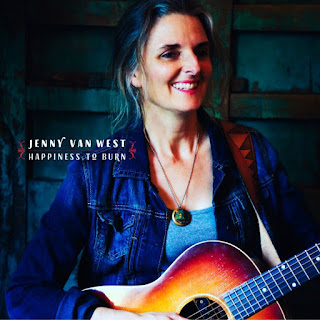 In 2015, Jenny Van West won the Maine Songwriters Association songwriting contest with “Nellie,” the lead-off track to her album Something Real. She followed that album with an EP titled Honey & Hive in 2016, and now has a new full-length album coming out, Happiness To Burn. This new disc features all original material, written by Jenny Van West, with some excellent musicians supporting her. Though based in Portland, Maine, Jenny Van West recorded this album in Los Angeles, and took advantage of some of the talent in this city. I’ve mentioned this before, but there are certain musicians that I’ve learned to pay attention to, always curious about which projects they’ll attach themselves to. Jenny Van West has two of those musicians on this CD – Ted Russell Kamp on bass, and Carl Byron on keys and accordion. Also joining her are Shane Alexander on guitar and backing vocals (Shane also produced the album); Austin Beede on drums; Jesse Siebenberg on guitar, lap steel, pedal steel, percussion, dobro and ukulele; Mike Mullins on mandolin; and Justine Bennett on backing vocals.

Jenny Van West opens the album with its title track, “Happiness To Burn,” which is an absolute delight right from the beginning. This song feels like a smile, a joyous sound, with an old-time jazzy vibe. Part of that is due to Carl Byron’s work on piano, part of it to the presence of Mike Mullins on mandolin. I’m also really fond of the bass line by Ted Russell Kamp. Yet, with all of that great playing, it is Jenny Van’s West’s vocals that are the focus and that sell this one. “I’ve got my heart on sleeve/And it’s dedicated, dedicated to you/Keep the fire warm until that moment I return/We’ll have happiness, happiness to burn.” This is a wonderful tune, one of my favorites from this album.

“Live In A New Way” has more of a pop-country vibe. It features some nice work on lap steel by Jesse Siebenberg. Siebenberg may be familiar to you. He became a member of Supertramp in the late 1990s, playing with his father, Bob Siebenberg, the band’s drummer since the early 1970s. He also performed on Kenny Loggins’ How About Now album, and has played and recorded with several other artists. In addition to lap steel, Siebenberg plays dobro and ukulele on this track. Carl Byron adds some nice work on organ. Here is a taste of the lyrics: “If we could just admit we were wrong/We might have a chance of getting along/Got to live in a new way/’Cause we’ve got some debts to pay/Yeah, I do believe it’s time.” That’s followed by another of the disc’s highlights, “Never Alone,” which has a gentle folk and country sound, with Jesse Siebenberg on pedal steel. This is a beautiful song that helps remind us of what is important in these troubling times. “But we got to have faith, got to take heart/Got to stick together when life falls apart/Got to hang tough, and we got to let go/Because even when the road is rough/We’re never alone.” We all need to hear “We’re never alone” from time to time, don’t we? It wasn’t long before I was singing along to this song.

Then “45” is an upbeat, rockin’ country tune about a single, a seven-inch. However, I also feel like it’s about my age; “spins so fast” seems to apply to the world around me. This track features some nice work on piano. It’s followed by a mellower, thoughtful song titled “Where I Stand,” which is another of my favorites. Check out these lyrics: “Some things that I once understood/Are not completely clear/The night has made a silhouette/Of all that I hold dear/I’m hanging onto shadows/And none of it is real.” Not bad, eh? Carl Byron plays accordion on this one. Justine Bennett provides some nice backing vocals. “Twenty-Seven Dollars” is a fun, playful, totally enjoyable song. Mike Mullins plays mandolin on this one, and Josh Grolemund joins in on tambourine. Jenny Van West ends the album with “Embers,” a beautiful song, on which her vocals are mainly accompanied by Carl Byron on piano, with also some nice work by Jesse Siebenberg on lap steel. “And the only thing I ever owned was borrowed/Let’s leave our worries on the doorstep of tomorrow/Let’s sing and let’s remember/Let’s love ‘til love is embers/Let’s sit here by that fire all night long.”

CD Track List
Happiness To Burn is scheduled to be released on April 20, 2018.
Posted by Michael Doherty at 3:37 PM