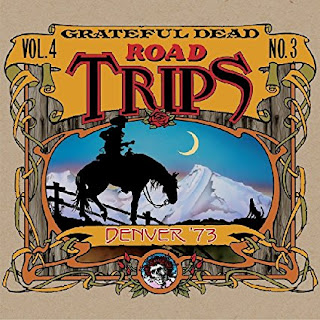 Real Gone Music continues to re-issue the Grateful Dead’s Road Trips series, working their way backward from the most recent release to the earliest. The latest to be re-issued is Vol. 4 No. 3: Denver ’73, which contains the complete show the Grateful Dead played on November 21, 1973, plus a few songs from the previous night. I’ve said it before, but 1973 is still my vote for the Grateful Dead’s best year (followed by 1977). The band just seemed on that year, the jams being both jazzy and spacy. This show is really strong, full of gems and great playing, particularly in the second set.

Bob Weir says “Hi ya, folks,” and the band kicks off the show with “Me And My Uncle,” a fun number that mentions Colorado in the lyrics. That’s followed by a nice rendition of “Sugaree.” They then make some technical adjustments, playing with the microphones and goofing a bit while they do. “That ought to do it for the time being,” Bob says, and the band goes into a sweet rendition of “Jack Straw.” It eases in gently, and then builds beautifully. After a good, kind of mellow, easygoing version of “Dire Wolf,” the band plays “Black-Throated Wind,” and it’s a really good, interesting version with some nice little surprises. Bob rips into those vocals toward the end, which is wonderful. The band then picks up the pace with a totally fun rendition of “Big Railroad Blues.” Listen to the playful way Jerry sings “Papa told me too” toward the end. And there is some playful “Mexican Hat Dance” tuning following that song, leading into an enjoyable “Mexicali Blues.” They keep the fun vibes rolling with “They Love Each Other.” I love versions of this song from 1973, when it had a bit more pep and there was that added section. And this rendition is particularly good. That abrupt ending caught me off guard, but I like it. Bob then slows things down with “Looks Like Rain.” This is a beautiful and powerful version. They follow that with “Here Comes Sunshine,” a song off Wake Of The Flood, which was the band’s new album at the time. This version develops into a really good jam, and ends up being one of the highlights of the first set. A breezy “Big River” and a beautiful “Brokedown Palace” round out the first disc.

The second disc begins with the last song of the first set, Bob’s “Weather Report Suite,” from Wake Of The Flood. When I was seeing the band in the 1980s and 1990s, they’d only do the third part of the suite, “Let It Grow.” But here we get a nice full rendition, with a good jam. The second set then kicks off with another tune from Wake Of The Flood, “Mississippi Half-Step Uptown Toodeloo,” a wonderful version that leads straight into “Playing In The Band.” This is one of those special second sets that has a theme the band returns to. This time it’s “Playing.” Some of the early versions of this song weren’t anything exciting, but by 1973 the band was stretching out on this one, and the jam here is definitely worth checking out. This is when things get interesting. “El Paso” somehow emerges naturally out of that jam, flowing easily from “Playing” and sounding great. The band is cooking right along now. Usually there is a pause after “El Paso,” but this time the band dives right back into the “Playing” jam. And then we get a bit of “Wharf Rat,” just a delightful tease which becomes a “Dark Star” tease before the band eventually begins “Wharf Rat” properly. This is the Grateful Dead at their best, letting the muse take the music where it will. This is a phenomenal version of “Wharf Rat,” full of passion, yet delicate and intimate at just the right moments. From there, the band returns to the “Playing In The Band” jam. This is when things get jazzy. Check out Billy’s work on drums. The band is grooving. Then after a couple of minutes, things begin to get less settled, stranger, darker. The sound rumbles, there is a sense of foreboding, but crazy gnomes are at work turning gears, moving the machinery up toward the sun again, and you know it will turn out all right, sooner or later. Sure enough, things start coming together, and we hear that familiar part to “Playing,” and then the song bursts forth again. Oh yes! And as the band eases out of “Playing,” it eases into “Morning Dew,” a rendition that is tender, gentle as it starts, then builds into something powerful, yet still finds those tender, moving moments later on. It’s a pretty amazing rendition to finish up the second disc.

The third disc kicks off with “Truckin’,” to get everyone moving. See, the world hasn’t ended after all. There’s still plenty of dancing to do. Ah, “What a long strange trip it’s been.” But the band is not done yet, and the jam leads straight into “Nobody’s Fault But Mine” and then into a lively, energetic, totally delicious version of “Goin’ Down The Road Feeling Bad.” They then wrap up the second set with “One More Saturday Night.” It wasn’t a Saturday, but no matter, the band wanted to end the set with a party number. The encore is a sweet version of “Uncle John’s Band.”

The third disc includes a few tunes from the previous show, beginning with “Truckin’.” Yeah, they did “Truckin’” two nights in a row, but they sure didn’t play it exactly the same way two nights in a row. Hell, they couldn’t do that even if they tried. This one has some fantastic moments, and the jam goes in a different direction from the other version, eventually leading to “The Other One.” Holy shit, Phil’s pounding intro is different from other versions. This is a song that the band found endless ways of attacking, always making it interesting. This version begins with a nice, long, wonderful jam, an energetic and bright beast. And after the first verse, things get crazier, weirder, just the way we like it. Then the jam turns jazzy and we get a bit of a “Mind Left Body” jam before easing gently into an absolutely beautiful “Stella Blue,” one of my favorite songs. “It seems like all this life was just a dream.”