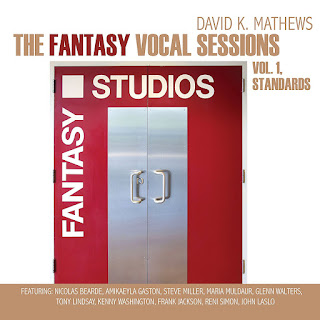 David K. Mathews has played piano and keyboards with a lot of great artists over the years, most notably Tower Of Power, Etta James and Santana. Yes, his resume is impressive. For his new release, The Fantasy Vocal Sessions Vol. 1, Standards, Mathews has recruited the help of several different talented vocalists, including Maria Muldaur, Nicolas Bearde and Amikaeyla Gaston. The band for this release includes David K. Mathews on piano, Jim Nichols on guitar, Peter Barshay on bass and Akira Tana on drums, with Wayne de Silva joining on tenor saxophone for several tracks, and Carl Lockett providing some excellent work on guitar on one track (“When Sunny Gets Blue”).

The album kicks off with “I Want To Talk About You,” written by Billy Eckstine. We could all use a little romance these days, and this music will certainly set the mood, led by David K. Mathews’ light and heartfelt work on piano. Vocalist Nicolas Bearde delivers a wonderful performance here, smooth and passionate and true. And Wayne de Silva’s saxophone speaks clearly of the woman too, a second voice singing her praises. “Because I love you and I want to talk about you.” Nicolas Bearde also provides vocals on a sweet and delightful rendition of “Smile.” “I Want To Talk About You” is followed by “Alfie.” I still haven’t seen Alfie (the play or either film version, actually), but I’ve heard several versions of this song over the years. This one features the touching vocal work of Amikaeyla Gaston (her own story is incredible, so when you get the chance, look her up). The production is decidedly somewhat restrained, so that Amikaeyla’s voice is given the space to shine and really be the focus. Wayne de Silva provides more excellent work on sax.

Peter Barshay begins this rendition of Irving Berlin’s “Blue Skies” on bass, setting a cool tone before the rest of the band comes in. The vocalist on this track is none other than Steve Miller, and it’s great hearing him deliver a jazz performance. I grew up listening to his 1970s rock output and enjoying it. I used to play that Greatest Hits cassette a lot. This track finds him giving a very different performance, and totally nailing it. I need to look into whether he’s put out any other jazz material, because I love how he approaches this song. “I should smile/That’s exactly what I’ll do.” This is an excellent track, with a groovy late-night vibe, and I love Mathews’ work on piano, which is absolutely wonderful. This is certainly one of my favorite tracks on this CD. That’s followed by “Oh Papa,” which features another familiar voice working in a realm somewhat different from that for which she is best known. Maria Muldaur is probably still best known for her hit “Midnight At The Oasis,” though she has thrived in blues and other genres as well (I especially love her work with Jerry Garcia Band in the late 1970s). There is something both sensuous and comforting in her approach to “Oh Papa,” a song that she actually recorded before, including it on her 1974 album Waitress In A Donut Shop. While I like that earlier version, I prefer this new rendition. I love the texture of her performance, and of this track in general. There is some really nice work here. Maria Muldaur also joins David K. Mathews for “Lover Man,” which she also recorded before in her career. This track has a cool vibe right from the start, and features excellent work on piano and a delicious vocal performance, particularly toward the end.

In “Ruby,” there is the line “They say, Ruby, you’re like a song.” It’s an interesting line, as women named Ruby seem to only exist in songs. I don’t believe I’ve ever met a Ruby, but I’ve certainly heard of Ruby in songs like “Ruby, Don’t Take Your Love To Town,” “Ruby Tuesday,” “Ruby Baby,” “Ruby’s Shoes” “Rock ‘N’ Roll Ruby” and of course this one, written by Mitchell Parish and Heinz Roemheld. Vocalist Glenn Walters delivers a somewhat gentle, yet passionate rendition. I like how this track doesn’t rush into the sax solo. This entire album, actually, is really good at letting the songs move at their own pace, allowing them to breathe and grow. This track also features good work on guitar by Jim Nichols. Glenn Walters also joins David K. Mathews for “Skylark,” a track that begins with a sweet piano solo. Glenn Walters’ performance has a friendly vibe, both engaging and comforting. This track also features Wayne de Silva on saxophone.

CD Track List
The Fantasy Vocal Sessions Vol. 1, Standards was released on February 2, 2018 on Effendi Records.
Posted by Michael Doherty at 12:19 AM