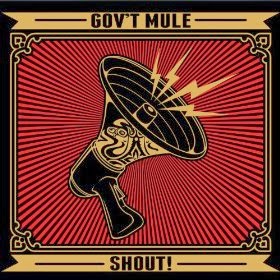 Gov’t Mule’s new album, Shout!, is the band’s first studio album in four years. This rock jam band has an interesting approach to the new album. There are two discs, but it’s the same material on each disc. That is, the same songs appear on both discs. But the second disc features different versions of the tunes, each with a special guest vocalist. Folks like Elvis Costello, Dr. John and Steve Winwood all join Gov’t Mule on the second disc.

All the songs on Shout! were written by Warren Haynes. Sometimes the sort of gruff, boisterous energy of the vocals reminds me just a bit of Brent Mydland. Other times, like on “When The World Gets Small,” the vocals remind me of Lou Gramm. These are basically rock tunes, but a song like “No Reward” has a heavy blues-rock vibe. And then “Scared To Live” has a reggae beat, which is nice, though it is the sound of that song’s choruses that I really love.

On the second CD, the songs are presented in a different order. With three exceptions, the versions on the second disc are shorter.

Shout! kicks off with “World Boss,” a groovy rock number with a bit of a funky dance rhythm at its base. “Everybody, have you heard the news/World boss is coming.” There is a nice jam toward the end of the tune. On the second disc, Ben Harper provides vocals for this tune.

“Whisper In Your Soul” has more of a trippy feel, particularly due to the guitar. The vocals, however, have a somewhat romantic bent, which is nice. “Lie with your body next to mine/Feels like I’m traveling through time/I feel the whisper in your soul/I feel me losing all control.” And when it kicks in, it has more of a rock feel. Grace Potter provides vocals on the version on the second disc.

“Captured” has a cool, slow, somewhat bluesy groove (slightly reminiscent of something like “Almost Cut My Hair” or the slow versions of “Season Of The Witch”).  Here is a taste of the lyrics: “Now I’ve got this sinking feeling/Though I try to brace myself/I can feel me start to surrender/Sweet surrender/Everything I needed to remember/Everything I needed to forget.” This is one of my favorite tracks. There is a gorgeous, loose instrumental section, with sounds like whales gently calling. That leads into a great jam, which kind of sneaks up on you. But soon you’re completely captivated by the guitar. It caught me off guard when the song started to fade out. Even though it happened like eight and a half minutes in, it felt too soon. The version on the second disc features Jim James on vocals.

“Stoop So Low” with Dr. John

“Stoop So Low” commands your attention from its opening notes. It starts, “Let’s talk about last night.” Excellent backing vocals join in on the repeated title line, “How could you stoop so low?” This song has a great, mean edge that I love. Then toward the end, there is a sudden change in pace, and it becomes a fun dance number, with almost a kind of gospel thing happening. This is another of my favorite tracks.

Dr. John joins the band on this song for the second disc’s version. I’ve long been a fan of Dr. John’s music, and this tune fits right in with what he does so well. Listen to the delicious way he sings the line, “This ain’t the first time, baby.” While most of the renditions on the second disc are shorter than their first disc counterparts, this is one of the few exceptions. Late in the song, after a sustained note on guitar, he sings quietly, a cappella, “How you could stoop so motherfucking low.” And then the song goes into a great jazzy section. This track is definitely a highlight on the album.

“When The World Gets Small” featuring Steve Winwood

“When The World Gets Small” begins with a slower, more laid back feel. The lyrics start, “When the world gets small/Feel like it’s closing in/Through it all, there’s you/My friend.” This one reminds me of Foreigner, particularly in the style of the vocals. Steve Winwood provides lead vocals on the second disc’s version of this tune.

“Funny Little Tragedy” begins with a cool punk line on bass. This tune has a great urgency, a great energy. This is the song that led to the idea for the second disc. Warren Haynes called Elvis Costello to ask about vocal microphones, because the song reminded him of some of Costello’s early work. That led to him imagining Elvis singing it. And on the second disc, Elvis Costello provides the vocals, and it’s fantastic. Warren is right – this does feel like some of Elvis Costello’s early material. This is an excellent track.

“Bring On The Music”

“Bring On The Music” is by far the least interesting tune in this collection. It’s just a slow rock number. Early on, Warren sings, “Shook my head and wondered what’s happening to all our brothers/Made me stop and realize it’s time to love one another/It’s time to love one another.” He’s just realizing that now? It’s a little late for lyrics like that to hit us with any force, as we’ve heard them so many times before. This is also the longest track on the album.

Disc One
Disc Two
Shout! was released on September 24, 2013 through Blue Note Records.

(Note: I also posted this review on Pop Culture Beast.)
Posted by Michael Doherty at 1:14 PM