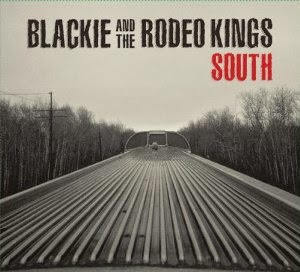 I feel like I’ve been saying this a lot lately, but there is so much great music coming out of Canada these days. South, the new album from Blackie And The Rodeo Kings, is a really good group of tunes, with all three main members contributing songs. This is the band’s eighth album, and is largely an acoustic endeavor, though with their rhythm section of John Dymond on bass and Gary Craig on drums. There isn’t a weak track here, and some – like “I’d Have To Be A Stone” – are absolutely wonderful.

The album starts off strong, with “North.” The first thing that hits me is the excellent vocal work by Tom Wilson, who sings lead on this track (and also wrote this song). There is a great, almost yodel-like quality to his voice at one moment. And then I love the way certain lines are stretched out, like when he holds on the word “down” in the lines “And the sun goes down way too fast/And the sun stays down too long.” Tom’s voice then gets good and low on the word “tired” in “and leave this dirty, tired town,” a really nice touch, making us actually feel the word, feel precisely what he’s getting at. This is a very cool acoustic tune, with some nice work on guitar. But it’s that steady rhythm that really drives the song and gives it a kind of positive vibe.

They follow “North” with the album’s title track, “South,” written by Colin Linden. This one has a sweeter, sadder, more beautiful vibe. Check out these lines: “I can’t stand to live this way/And I can’t bear to see you cry/So baby, point this engine south/I want to ride ‘til we get our fill/We spent our youth trying make a life/But from here I know we never will.” I love the guitar during the instrumental section. John Whynot plays organ on this track.

“Gotta Stay Young” is a really interesting combination of country and blues. And I dig these lyrics: “Well, I learned about love by playing in a band/I thought I had it good doing one night stands.” This one was written by Tom Wilson and Dave Thomson, and Tom sings lead. “It’s not my head, it’s the room that spins.”

“I’d Have To Be A Stone” is a gorgeous, slow, sad tune written by Stephen Fearing and Tom Wilson. I really like what Stephen Fearing does vocally on this track. He sings, “I’d have to be a stone to forget you/Now I’m living like a stone.” That line is so simple, yet completely heart-rending. The whole song is like that, and so it gets right inside you. This is one of my personal favorite tracks from this album. “I’m singing hymns to the future/I’m digging holy ground.” Kevin McKendree joins the band on organ for this track.

“Everything I Am” is an interesting tune, with an early rock and roll influence as well as a blues influence, particularly in the vocal line, reminding me of Eric Clapton. Stephen Fearing wrote this one, and provides the lead vocals. It has a loose feel musically, which I dig. Check out the instrumental section – it’s very cool.

“Reinventing The Wheel Of Love” at first oddly reminds me of “Sloop John B.” Seriously, you can sing that song’s lyrics while listening to this tune, perhaps just a bit slowly. Despite the song’s hokey title, I like this one quite a lot. It was written by Colin Linden and Gary Nicholson. “Time after time we’re surprised to find a heart could ever hold this much/While we’re busy reinventing the wheel of love.”

“Fleur De Lys” has a sort of pop-country feel, and features some nice blending of vocals by Tom Wilson and Colin Linden (who also co-wrote the tune). But it’s probably the instrumental section that I love most.

South concludes with its sole cover tune, “Driftin’ Snow,” which was written by Canadian folk singer Willie P. Bennett. This is one of my favorite tracks, in part because of the vocals. It begins with some excellent a cappella singing, and there is another a cappella section at the end. Sounds fantastic. This is a powerful track. Interestingly, the first release by Blackie And The Rodeo Kings back in 1996 was a tribute to Willie P. Bennett, and “Driftin’ Snow” was included as the final track of that one as well. The band’s name comes from the title of Bennett’s late 1970s release, Blackie And The Rodeo King.

South is scheduled to be released on January 14, 2014 through File Under: Music.
Posted by Michael Doherty at 5:20 PM