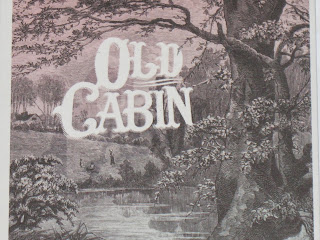 Lately I’ve been hearing a lot of good, interesting music coming out of Canada. The newest for me is the self-titled album by Old Cabin. This is a largely, gloriously mellow collection of songs, with some good lyrics and music you want to immerse yourself in. All tracks are originals, written by Jona Barr.

The opening track, “Sandstone Daughter,” begins with a thoughtful, mellow, sweet line on electric guitar. The vocals come in with a kind of melancholy tone. It’s really about mood, with somewhat sparse instrumentation. And then the background noise grows, moving to the fore, leading to the song’s most pretty section. And that’s when I feel I’m in good hands, and sit back to let the album take me where it will.

“Sandstone Daughter” leads right into the second track, “Borrowed Secrets.” And this one has a delightful early rock and roll vibe during the verses. There is also a playful sense of humor to some of the lyrics, which I appreciate. In one verse Jona sings, “I’ve got new friends/They’re awfully nice/They all wear new clothes/Got great advice.” Then in the next verse he sings, “You got a new boyfriend/He’s kind of weird/He’s got all the secrets/The kind you want to hear.” It’s a wonderful tune, with a cool instrumental section featuring some nice work on electric guitar.

There is something of a 1960s vibe about “Been So Long” too, in a way. And I really dig the guitar line, particularly in the instrumental section. The work on keys has a bright feel, which I like a whole lot. This one starts, “You see, it’s been so long since I’ve written a song.” And then at the end, the vocals take on more power, a greater need (“I want a wife a kids/I want a life with a picket fence, but sometimes that’s not how it is”). This is one of my favorites.

“Lighthouse” has more of a pop, mainstream feel. It’s kind of catchy, but much more interesting for me is “Good Days Bad Days,” which reminds me a bit of some of Syd Barrett’s solo work – in the rhythm, the electric guitar style and the vocal patterns. Jona sings “I was lost, looking for pleasure” and then has a line about the pronunciation of “leisure.” I’m a sucker for any kind of play with words. The more I listen to this album, the more I absolutely love this track. It has a lot going on, a lot to enjoy. I dig the short instrumental section toward the end. This might be my favorite track.

There is something about “Steady On The Wheel” that really grabs me. It has an oddly hypnotic, entrancing quality. Perhaps it’s those perfectly placed pauses (like suddenly holding one’s breath), or the ticking on the hi-hat or the vocal delivery (early on urging us to “just relax”). Maybe it’s the cool instrumental part. Whatever it is, I love this song. It ends with the repetition of the line, “I’ll keep both hands steady on the wheel,” leading to it being sung a cappella.

“The Cave” reminds me a bit of The Grownup Noise, in its tone and vocal delivery. Fans of that band should dig this album, and this song particularly. “Don’t you give up on us.” One of my favorites is “Finders Keepers” (which also has a bit of a Grownup Noise feel). I love the mood of this song. It’s another that gets right inside me, or perhaps under me, lifting me like a wave, carrying me along. You know? There is a certain beauty to this song. The vocals and the guitar part are excellent.

The closing track, “Stuck In A Tree,” like the opening track, has some wonderfully mellow playing on electric guitar at the beginning. Then the vocals sound so sweet and smooth, “Way back when we were two kids we left our home to find out what life is.” This song has some gorgeous harmony vocals, which certainly add to the song’s beauty. This is yet one more of the CD’s highlights.

Old Cabin was released on November 26, 2013. By the way, the CD’s liner notes include a small poster of the album cover art (which was done by Corey J. Isenor).
Posted by Michael Doherty at 5:06 PM