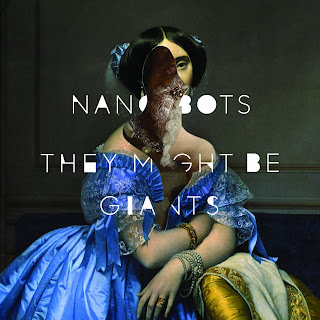 I’m always excited to hear a new album from They Might Be Giants (yes, including their children’s CDs – “Alphabet Of Nations” is now one of my favorites to see them perform live). Their new album, Nanobots, has twenty-five tracks, yet is only forty-five minutes. That means lots of very short tracks. They Might Be Giants have included short tunes before (like “Please Pass The Milk Please” and all of the other tunes in that odd medley on Apollo 18). On this new album, however, the short tracks feel mostly extraneous and not all that interesting. There are seven tracks which are less than thirty seconds each. But don’t worry – there are plenty of other songs that totally work. Standouts on this album are “Call You Mom,” “Replicant” and “Icky.”

This band is always capable of surprises. In “Circular Karate Chop,” there is a sudden section with percussion, to which is added a spoken word bit by the sensei, with three rules: “One, outsource your feelings/Two, limit your training to be task-specific/Three, assign regret to those accountable.”

Another thing that was surprising to me is that a number of these songs have something of a 1960s pop feel at times; like, for example, “Stone Cold Coup d’Etat.” And the “ba ba ba ba” vocal bit in “Sometimes A Lonely Way,” which is a oddly sweet song. (That song’s line “Not everyone who is lost is wondering why” seems a strange twisted reference to that line from J.R.R. Tolkien, “Not all those who wander are lost,” which adorned bumper stickers for years.)

Nanobots opens with “You’re On Fire,” typical fun They Might Be Giants material, in which an important bit of information is delivered in an offhand manner – “Your head’s on fire.” And there are backing vocals repeating, “Combustible head.” But this person has bigger troubles: “Is that your car they’re towing/I’m pretty sure that’s your car.” The good news is, “You’re easy to spot in a crowd.” Sure, it’s not all that clever or original, but it’s a lot of fun.

“Nanobots,” the CD’s title track, is a more interesting tune. I love lines that celebrate the positive with the negative, like “All the old troubles will soon be at an end/And all the new ones will begin when we send the signal.” There’s an unexpected reference to the Status Quo song in these lines: “I would decorate the room, but there’s no more space/All I see are pictures of matchstick men.” This is a cool tune.

“Black Ops” is an odd song (well, it’s a They Might Be Giants Song, so…) about secret cops on holiday dropping presents from helicopter. I dig the lines, “We take the best of it/And make a mess of it.” For most part, this song is percussion and vocals, with the vocals sung almost as in a children’s song – simple, straight-forward, clear. Then about halfway through, the song kicks in and takes on a heavier tone. This has a different feel from a lot of the band’s material, and has a sudden ending.

“Call You Mom” opens with the lines “I think I’d like to call you Mom/Because you remind me of my mom.” This one has something of an old rock and roll feel, but with that strange They Might Be Giants energy about it. And of course it has some odd lyrics like, “I turned around to find that you were gone/Which was exactly like my mom/And I will go hang up my sailor suit/And lie face-down on the lawn.” This is one of my favorites.

The track with probably the brightest, most fun feel is “9 Secret Steps.”  “Nine secret steps to the key to the door that you’ll throw in the well/And let go of all your thwarted dreams and visions of success.”  There’s a short strange bit, “I can’t tell you what’s in secret step five/You will know when you’re no longer alive,” before it goes back to those bright, fun tones. “Let go of all your thwarted dreams.”

The track with the coolest sound and groove is “Replicant.” The song’s narrator addresses the replicant: “Look at me when I’m talking to you/What have you got there behind your back?” Yes, as if to a child, which is wonderful. And he’s protective of the replicant, as he would be of the original child (“Whatever you did, we’ll get through this/Go out the back and I’ll deal with the cops”). There is also a great jazzy element to this tune. I absolutely love this song, and dig it more each time I listen to it.

“Icky” is another one that feels a bit like a 1960s pop tune, particularly in its beat. Though obviously not in the lyrics, as “Icky” has lines like “You’ve got a nice pair of slacks which he takes but will only return one of them.” And then later: “Here, this is yours, I’m done with it, I’ve brought it back/Don’t know anything about some other slack/I only borrowed one slack.” This is another of this album’s truly fun tracks.

Nanobots ends with “Didn’t Kill Me,” a short song performed a cappella. “Though she didn’t kill me/She didn’t make me stronger.”

(Note: I also posted this review on Pop Culture Beast.)
Posted by Michael Doherty at 12:29 PM