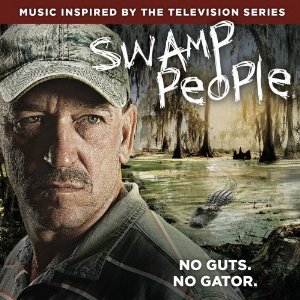 I have to say right up front that I’ve never seen the television program Swamp People. I’m coming at this CD as someone who simply loves the music, someone who appreciates a good dose of Cajun fun now and again. And again.

It says on the CD cover, “Music Inspired By The Television Series,” but I somehow doubt that Swamp People, which first aired in 2010, inspired, for example, Hank Williams to write “Jambalaya,” as that song was released in 1952.

Still, this is a very cool collection of music, and includes a kind of funky, somewhat disco-flavored tune from The Neville Brothers, some classics by Hank Williams and Bobby Charles, as well as some newer material.  There are a couple of instrumental tracks, including a great tune by Buckwheat Zydeco and a fun take on a tradition number by Amanda Shaw.

All of these songs are so vibrant and alive. They’re like party songs that don’t even need listeners to carry on the party. The songs themselves do the trick, and you can join in if you wish.

Swamp People opens with Steel Bill’s “Swamp People,” a rather silly song, made sillier by its somewhat earnest, serious delivery. This song celebrates all the stereotypes with lines like, “Hot sauce on almost everything.” He then sings, “There ain’t nothing in the water these boys won’t cook/It’s just their way of life/They chose the lesser evil/Way down in bayou land/They call ‘em swamp people.” This is a new song written specifically for this compilation. It’s not a bad song, but it has the weaknesses inherent in all songs written to fit in with the theme of an existing show.

Jerry Reed’s “Amos Moses” tells the story of Amos who hunted alligators for a living, an illegal activity. This is a seriously fun and goofy song in which we learn that Amos’ dad used Amos as alligator bait when he was a kid (“tie a rope around his waist and throw him in the swamp”), and this has clearly had some sort of impact on the guy. This song was originally released in 1970, on Jerry Reed’s Georgia Sunshine (and also as a single).

“Zydeco La Louisianne” is an instrumental track by Buckwhere Zydeco that even has a groovy percussion section. This is pure fun, and should liven things up round your place whenever you listen to it. Toss some Mardi Gras beads around.

I’ve always loved “Polk Salad Annie” by Tony Joe White, and I’m so happy to revisit it on this compilation. Seriously, is this one of the coolest songs ever or what? It begins with a bit of spoken word: “Now some of you all never been down south too much/I’m going to tell you a little bit about this so that you understand what I’m talking about.” And he goes on to talk about the plant, polk salad, and then grunts. It’s fantastic. Then the song kicks in, with some great support from the horns. But probably my favorite parts of this song are his seemingly offhand comments. Like after the first time he sings, “Everybody said it was a shame because her mama was working on a chain gang,” he adds, “A mean, vicious woman.” And gives another grunt. Man, oh man. And a bit later he says, “The gators got you granny, chomp, chomp, chomp.” Then there’s a short section on harmonica. This is the kind of song that could be stretched out for a long, long time, and you wouldn’t get tired of it. It’s got such a great rhythm, and the lyrics are totally entertaining. I love the way he plays with the vocals.

“What’s In That Bayou” by Chris Ardoin starts with sound effects of someone lost in the swamp, including slapping an insect, which is lame. But when the song kicks in, it’s pretty cool. It has a somewhat relaxed vibes to the vocals on the song’s title line, with some nice backing vocals. But the accordion has a wild energy and is the highlight of the song. “It’s so spooky and dark/I hear the hungry pack of wolves bark/I’m surrounded by gators and snakes too.”

Of course, “Jambalaya (On The Bayou)” is my favorite track. You can never go wrong with Hank Williams. This is one that’s been covered by lots of artists over the years (The Carpenters, Brenda Lee, Lucinda Williams, Dolly Parton, Shocking Blue), but can you beat the original? This track from 1952 is still completely delightful. “Son of a gun/We’ll have big fun/On the bayou.” Indeed.

“Crawfish Walk” by Jumpin’ Johnny Sansone is another that is just wonderful. I really love the work on harmonica on this song. It’s impressive. And the song’s cool vibe is delicious. It reminds me of those great Stax records.  “I try to come up with a reason/Maybe it’s just not the season/I don’t want to get upset/But I feel like I’m caught up in a net/I’m doing the crawfish walk.” This song was originally released on Jumpin' Johnny Sansone's 1997 release, Crescent City Moon.

The Swamp People compilation ends with a classic early rock and roll tune, Bobby Charles’ “See You Later, Alligator.” You all know and love this great tune. The sound on this CD is clearer than I remember it ever being before.

Swamp People is scheduled to be released on May 21, 2013 on Rounder Records through Concord Music Group.
Posted by Michael Doherty at 11:26 AM