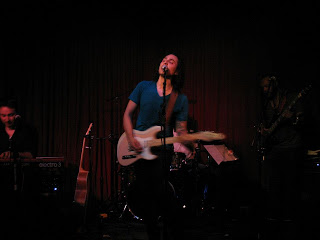 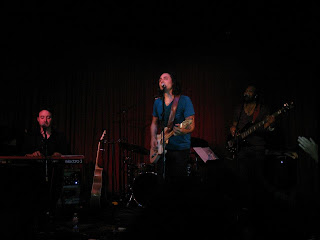 Before the start of Keaton Simons’ set at the Hotel Café in Los Angeles on Saturday, May 4th, there was an announcement that the show was sold out, and that anyone not wearing an orange wristband had to leave. I’ve been to the Hotel Café many times, and had never heard an announcement like that before. It was always sort of understood that if you bought a ticket for one band’s set that you could stay and enjoy all of the other bands on the bill that night. This was really the first indication to me that I was in for something special.

When at 11 p.m. the house music went off and the audience cheered, Keaton Simons asked, “Does that mean we’re starting the show?” The band then kicked off their set with "Mama Song," a song with a good solid rock groove. They added a bit of funk to it, and led into a good jam, the song drifting in to “I’m A Man,” with some vocal play, before going back into "Mama Song."

Keaton Simons requested a bottle of water before starting “Thrill Of It All,” the opening track of his new album, Beautiful Pain. (As this performance was the CD release show, he played quite a few tracks from this album.) By the end of the song, several bottles had been brought to the stage. Keaton Simons switched to his acoustic guitar for the new album’s title track. This is a really good song, and is the one that got me interested in him when I first heard it. He sings, “If you’re gonna save a life/Maybe it should be your own.”

Keaton stayed with the acoustic guitar for “Read My Mind,” another song that I dug right from the start, and “Inspiration.” “Inspiration” is a quieter song, and during it some audience members hushed the louder folks. (Patrons at Hotel Café often tend to talk through concerts, which is one reason I like to be up in the front, and away from most of them.) Toward the end of the song, they sang part of it a cappella (well, with the kick drum), and the audience sang along. Keaton asked the audience to close its eyes (oddly, something the previous band also did at one point).

After “Inspiration” Keaton asked the crowd, “How are you guys doing?” Of course the audience cheered, and so he responded, “That’s exactly what I was hoping you’d say.” Perfect. (Whenever musicians ask the audience, “How are you?” I’m tempted to just shout out, “I’m doing all right, thanks for asking” – and sometimes I do. I didn’t at this show, however.)

Keaton switched back to the electric guitar for "Grim Reaper." During this song, he introduced the drummer, Robin DiMaggio (who plays drums on the new album), and that led to a drum solo. This solo developed organically from the song and then built from there (which is what drum solos should do, but often don’t). That led to a keyboard lead section by David Garner, and the resulting jam was possibly the best moment of the show. It was just great. There was also a section with Darwin Johnson taking a lead on bass, which was cool.

Vocalist Andy Allo joined the band for a fun cover of "Masterpiece," performed with a bit of “I Got A Woman” added in the middle. Then Billy Morrison joined the band on electric guitar for “The Medicine,” a song that was requested earlier. He stayed on for the set closer, the Beatles’ “With A  Little Help From My Friends.” They did the song more like the Joe Cocker version, including the scream. It was pretty fucking great.

The encore was The Band’s “The Weight.” You can never go wrong playing “The Weight” as your encore. They did the last verse a cappella. The show ended at 12:35 a.m. After the show, Keaton went out back to sign CDs for fans. And there were a lot of folks back there (something that is also unusual for the Hotel Café crowd).

Posted by Michael Doherty at 12:51 PM