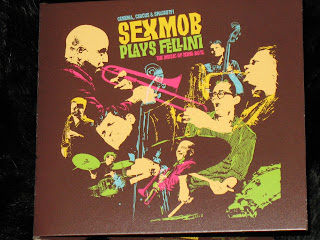 Sexmob’s new studio album, the band’s first in seven years, is titled Cinema, Circus, & Spaghetti: Sexmob Plays Fellini: The Music Of Nino Rota. And, as you most likely surmised, it contains music from several of Federico Fellini’s films. This music really works on its own. Each track, each piece, is a living creature with its own ideas and desires. You can imagine it taking on physical form and joining you in your room late at night, drinking your liquor and trying on your coat, maybe waking you by knocking something over or teasing your cat, or by sliding into bed beside you and running its many fingers over your legs.

All of the music was recorded in one day, like those great old jazz records were. That’s pretty impressive, but the music itself is even more impressive, and at times truly exciting. The compositions are excellent, of course, but it’s also the way this band approaches the material that really makes me love this album. These guys can play the hell out of a tune, and it’s clear that they themselves are really into this music. By the way, the title comes from something Fellini once said: “My films, like my life, are summed up in circus, spaghetti, sex and cinema.”

I’ve seen some of Fellini’s films, but not all. I don’t think familiarity with his films is at all necessary to enjoy this fantastic album. You don’t even necessarily need to have a deep appreciation of jazz. You just need to be open to great music. If you let it, this album will give you the feeling that you yourself are part of a Fellini film, which is what everyone wants. Enjoy.

The album opens with “Amacord,” which begins with some percussion. And then around a minute in, it becomes this deliciously slow jazz piece. I love how surprising this track can be, even eliciting laughter at odd moments.

Sometimes this music cries out to you, teases you, like at moments in “Il Teatrino Delle Suore.” At other times, it seduces you. I love that bass line at the beginning of “La Strada.” It’s seriously cool; then the track gets quite loose. They revisit that bass line in “Zamparo,” also from La Strada.

“Volpina” has something like a Bo Diddley beat once it gets going, which is surprising and wonderful – there is something of a New Orleans flavor here. The song has an excellent build, and then it suddenly gets intense and deliciously chaotic. There is a great flow to the way the music is presented, for with the following track, “Paparazzo,” from chaos emerges a familiar jazz beat. There is also a crazy, insistent drum solo toward the end of that tune.

The first time I saw Fellini’s piece from Spirits Of The Dead, it was very late at night at the New Beverly Cinema in Los Angeles. As I recall, it came after a triple feature, just an additional, unannounced treat (it was just Fellini’s short, not the entire film). I was basically blown away by it, the perfect ending to an excellent night at the cinema. Sexmob’s take on the music brings me right back to that great night. There is something hypnotizing and alluring about this music. It’s seductive and haunting.

Probably my favorite piece in this collection is “Nadia Gray,” which comes on fast and furious, with a great intensity. I love it – the urgency of the horns, and also the playfulness of certain moments. And it has a drum solo, which I always appreciate. You’re going to want to listen to this one loud.

And then “The Grand Hotel” starts right where “Nadia Gray” left off, which is interesting, as the pieces are from two different films. They work perfectly together. Then after a while it becomes quieter, tiptoeing about, but certainly still up to some mischief.

“Gelsomina” is a short track with just bass. The next track, “I Vitelloni,” begins with bass (so again, clearly a lot of thought was put into the ordering of these tracks). This one has a fantastic groove, with that great vibrant horn singing over it. This is another personal favorite of mine. It becomes quite playful, right to its final note.

Cinema Circus & Spaghetti: Sexmob Plays Fellini: The Music Of Nino Rota is scheduled to be released on March 19, 2013 through The Royal Potato Family. By the way, this album has made me excited to revisit the Fellini films that I own.

Posted by Michael Doherty at 2:55 PM