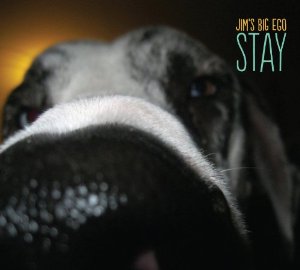 Jim Infantino’s work has always seemed to me to have something of a carefully crafted lunacy about it.

Often it feels like Jim is standing at the edge of the abyss, and he’s the only one who knows it’s the edge. And so he watches folks as they gleefully, ignorantly tumble in, and he describes it all in his songs. Sometimes it’s like he studies humans as an alien culture. You hear it in a lot of the tracks on Stay, the newest album from Jim’s Big Ego. He’s not completely detached, however; there is definitely a heart to this music. There’s something serious in even his silliest songs, and something humorous in his most serious songs.

As you might expect from a Jim’s Big Ego album, this release features some wonderful lyrics, like these lines from “Chill”: “I medicated all my cares away/But they came back to me the very next day.”  And this from “15 Seconds Of Fame”: “I wonder if you wonder how I’m doing now that I never think of you.” That song also asks the important question, “Where’s my yeti?” This is a really fun album. It had me dancing, like during “Earworm.”

Stay opens with “In My Cult,” and its beginning a cappella moment pulls us right into Jim’s church. And even though he might have a big ego, several lines into the song we learn he himself is not the leader of the cult. “Our leader loves big thighs.” There are lots of little gems of lines in this song, like “In my cult/There’s nothing to believe” and “We knew the truth but we forgot” and “We all tell little lies/In my cult/We wear a similar disguise/In my cult.”

The album continues somewhat in the same vein with “Another Thousand Years” which has a theme that’s similar. This one is about the end of the world, but the tone is quite different. “The rapture’s gonna wait.” No one can use the simple “Na na na na” like Jim’s Big Ego.  But this song does have something serious to say, which you hear in the lines like “I want to see my kingdom come/I'm praying for escape/Or else we’ll have to fix/What we took so long to break” and “How do we go on/Living day by day/With only human hearts/To guide us on our way.”  I also love the line, “Throw away our filth/Until we smell it everywhere.”

It’s interesting that Jim chose to revisit “Big Old Dark Green Car.” This song pre-dates the Big Ego by many years. It was first released on the 1992 cassette (yes, cassette) The World Of Particulars (an album that wasn’t released on CD until 1995), and then included also on the 1993 CD Strawman. This version is a bit different, with the full band sound, and the groovy (but short) instrumental section. But that insane energy is still there, perhaps even a bit heightened. And that great donkey-like vocal bit is still included. This is a song I always loved, and I’m always happy to hear it.

There is one error regarding the order of the tracks presented on the back of the CD – “404 Blues” actually comes before “Can’t Stop Foolin’ Around.” “404 Blues” is a great, groovy blues song about how we have too much information with all of our electronic gadgets (which remove some of the magic from our lives). It opens with the lines, “Too much information/Ain’t no more mystery no more.” It takes the old line, “I’m walking to New Orleans with a suitcase in my hand,” then plays with that familiar line by adding, “It says it will take me twenty days, twenty hours and twenty-three minutes/On foot from where I stand/And that’s just too much information for me.” There’s a great call and response section, with Jim asking random questions and the band shouting the answers. I love this song, and want to play it for all those people who say they can’t live without their GPS, all those people who are constantly using their phones to check stuff on the internet.

Near the beginning of “You’re Delicious” Jim sings, “There’s a hole in my heart/But I can’t stop searching/It must be love/It must be love.” This is a pretty love song, but with that Big Ego twist. When Jim sings, “You’re delicious/I could eat you alive,” it’s sweet, but he means it literally. If you weren’t sure at first, you will be when the Big Ego guys go all zombie-like, echoing the word “Brain” when Jim sings, “And there’s a song in my brain.” It’s a surprising and wonderful moment. You know it’s true love, if nothing can keep you from devouring the object of your affection. This might be my favorite track on this release. (By the way, in another song, “In My Cult,” they mention Shawn Of The Dead.)

Stay concludes with a truly beautiful and heartfelt song, “Habits & Plans,” featuring the lines, “Who is this man/Just a bundle of habits and plans/Or the way that he grins or he stands/What do I own?” And there’s a section with strings at the end that is wonderful.

Jim’s Big Ego is Jim Infantino on guitar and vocals; Jesse Flack on upright bass and vocals; Dan Cantor on drums and vocals; and Josh Kantor on keyboards, accordion and vocals. Joining them are Loewi Lin on cello and Frank Shaw on viola.