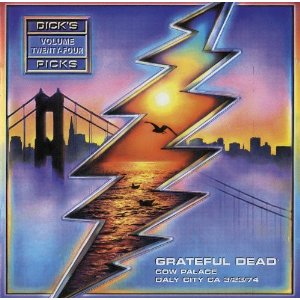 Dick’s Picks Volume Twenty-Four contains most of the concert the Grateful Dead performed on March 23, 1974 at the Cow Palace.  This show is important in Grateful Dead history because this was the night the Grateful Dead first played “Cassidy” and “Scarlet Begonias,” songs that would quickly become audience favorites. It’s also important because this was the show where the band introduced the Wall of Sound, its impressive new sound system designed by Owsley "Bear" Stanley. Bear, by the way, contributes some liner notes about the sound system for this CD. Those notes were written in December of 2001, for the original release of this volume. (Bear died in 2011.) The liner notes also include photos of the Wall of Sound, and a chart showing the distribution of channels and speakers. The band only used the Wall of Sound in 1974.

The Grateful Dead were known for doing nice, long concerts, and at this time the shows were particularly long. Even though this two-disc set contains two and a half hours of music, it is still missing ten songs from this show. But what these discs contain is pretty magnificent, particularly the first half of the second set.

The first disc set contains most of the first set from that night. The band opens with “U.S. Blues.” This version has lots of energy, which they keep up by going into a Chuck Berry rock and roll tune, “Promised Land.” They also do a sweet version of “Brown-Eyed Women,” after which you hear someone shouting for “St. Stephen.” In the first set? Unlikely.

Bob goes into “Black-Throated Wind,” a song included on his 1972 “solo” album, Ace. “You’ve done better by me than I’ve done by you.” Bob turns in a really good vocal performance. This is a song he always seems enthused about singing.

And then we get the band’s first performance of “Scarlet Begonias,” a song I love, and one that would be included on From The Mars Hotel later that year. And there’s a nice jam at the end, the first of the night. Phil responds to something, saying he can’t wear “that thing” while his glasses are on. I’d love to know what he’s talking about. They then go into a fun (and somewhat goofy) rendition of “Beat It On Down The Line.”

At the beginning of “Deal,” Bobby says, “You can sure tell the ones that won their tickets over the radio.” And then we get the band’s first concert performance of “Cassidy,” a song that was introduced on Ace in 1972. This is one of my favorites, in large part due to John Barlow’s lyrics, which are wonderful. This is an interesting version that seems to end abruptly.

The band does a cool version of “China Cat Sunflower,” and there is a nice energy to the jam, which has something of an “Uncle John’s Band” feel for a few moments toward the end before it slides into “I Know You Rider.”

They end the first set with the entire “Weather Report Suite,” a song they played only in 1973 and 1974. (Later they’d perform only the third part, “Let It Grow.”) This version boasts a seriously excellent jam.

(The songs missing from the first set are “Mexicali Blues,” “Tennessee Jed,” “It Must Have Been The Roses” and “El Paso.”)

The second set opens with “Playing In The Band.” There are some vocal microphone troubles at the beginning of the song. So they actually stop, and mess around while the problem is fixed. It doesn’t take long, and Bob says, “A thousand pardons, folks.” And they start again.  “Playing” basically always means a good jam. But in 1974, it means Holy moly! This is where the band gets loose, and it doesn’t take them long to get into some interesting territory.

And then suddenly we’re into the sweet land of “Uncle John’s Band.” “Well, the first days are the hardest days, don’t you worry anymore.” A couple of lyric flubs don’t much mar this nice rendition. The jam is pretty, and for a moment Phil seems to want to lead the band back into “Playing.”

Where they go is into a powerful and moving “Morning Dew.” I found myself holding perfectly still during this song’s quieter moments, so rapt was I in Jerry’s performance. It leads back into “Uncle John’s Band.” “What I want to know is how does the song go.” And the jam gets wild once more, leading back to “Playing In The Band.” What a great set of music.

Of course, there’s still plenty more after that, including a really good “Wharf Rat” and a fun “Sugar Magnolia” to end this disc.  (The songs missing from the second set are “Ship Of Fools,” “Ramble On Rose,” “Me And My Uncle,” “Around And Around” and “Casey Jones.” Also missing is the encore, “One More Saturday Night.”)

Dick’s Picks Volume Twenty-Four is scheduled to be released on April 2, 2013 through Real Gone Music.
Posted by Michael Doherty at 1:38 PM