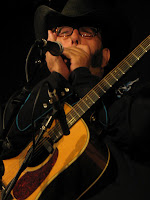 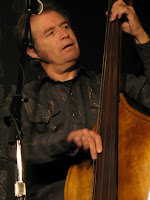 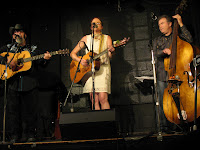 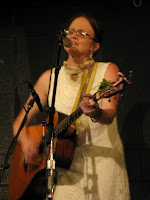 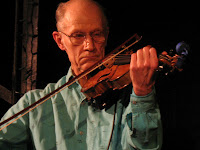 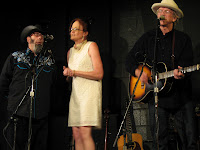 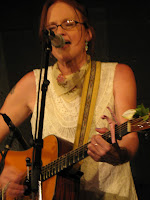 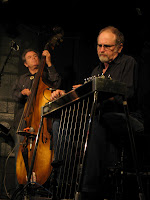 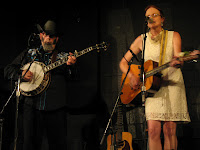 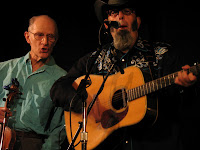 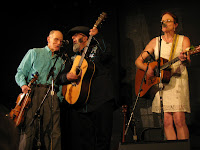 There are some things that I can always count on to lift my spirits. One of those is the music of Fur Dixon & Steve Werner.  I try to see this wonderful duo whenever I can.  And on Saturday, July 21st, they played at McCabe's in Santa Monica to celebrate the release of their new CD, San Pedro Session.  Joining them for this special show was Paul Marshall on bass (you know him from I See Hawks In L.A.), John McDuffie on pedal steel, and Brantley Kearns on fiddle.  They did two excellent sets.

Steve Werner played banjo on the first two songs - "Ventura County Line" and "Brother Tumbleweed" - and harmonica on the third, the beautiful "Summer's Gone Again."  In his introduction to "Homesick For The Highway Blues, " Steve joked, "Fun's fun, but now it's time to yodel."  And indeed he got the audience giving their best yodel. Before "Where Are We Going," Fur talked a bit about her punk rock phase. Apparently some photos from that time have recently resurfaced online. And of course it's mentioned in the song's lyrics, "Hollywood, the 1980s/Stoned-out punk rockers in your station wagon." They ended the first set with "Southbound" a song written by Doc Watson and Merle Watson. (Doc Watson died in May.)

Before the second set, Ric Taylor did two songs (truly interesting songs, lyrically and structurally). And then Randall Lamb did two songs. For the second of the two, "Can The Rich Get To Heaven," Fur and Steve joined him on backing vocals.

The second set opened with "Reputation Of A Rambler," a song they used to play at the end of their concerts. In his introduction to "When My Face Is Covered Over," Steve said, "It's a song about life cleverly disguised as a song about death." One of the highlights of the second set was Fur Dixon's new song, "This Broken River," which she co-wrote with Ric Taylor.  Steve played banjo on that one.  And the entire audience sang along to the last two songs, "Friends Around The Fire" and "Backroads And Blue Skies."

The encore was Woody Guthrie's "This Land Is Your Land."

The new CD, San Pedro Session, is available now on Grass & Gravel Records. It was recorded live at Alvas Showroom on September 18, 2011.

Posted by Michael Doherty at 4:26 PM