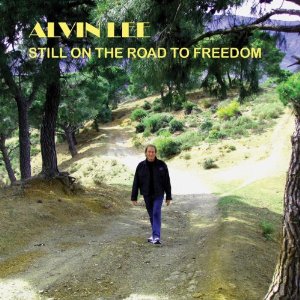 You probably know Alvin Lee from his work with Ten Years After.  That band will be forever famous for its wild set at Woodstock, immortalized in the documentary film (that version of "I'm Going Home" is one of the film's highlights), as well as for the song "I'd Love To Change The World" which reached #40 on the Billboard Hot 100.

In some ways, Alvin Lee's new album, Still On The Road To Freedom, feels like a reaching back, a looking back to the late '60s. But this is not a nostalgia record. It is not an attempt to recapture an earlier success, but seems more like a way to show the connection between the past and the present (and to explore both), something acknowledged in the album's title.  And there is a freedom this album takes to move along the musical time line and use whatever seems right. The album definitely has a heavy blues edge. (One of its tracks, "Blues Got Me So Bad," has these wonderful lines: "I said I'd die for you, babe/She said, that's what I want you to do.") But this is not strictly a blues album. There is a lot more going on here.  There is rock and rockabilly and folk, and it all comes together well. (By the way, "Nice & Easy" sounds like T. Rex meets Dire Straits.)

All of the album's songs were written by Alvin Lee. As for the idea of going back, there is a track called "Back In 69," (but it is more about the present than its title might suggest), and the final track is a remake of a tune from Ten Years After's 1970 album Cricklewood Green.  Some of these tunes are pretty short. Tracks 2, 7, 8, 11, and 12 are all under two and a half minutes. There is a hidden song which starts at 5:33 on track 13 (it's a very short acoustic instrumental tune).

"Still On The Road To Freedom"

Still On The Road To Freedom opens with its title track, which finds Alvin Lee journeying "for a distant land where it all began." And yes, Alvin Lee's guitar still has that great late '60s, early '70s sound. It has that drive, that reach for new territory, an interest in exploration and expression that characterized a lot of the best music of the time. And the guitar is given the freedom to stretch out here, in the song's best section toward the end.  The only thing I could do without is the echoes of "freedom."

"Listen To Your Radio Station"

"Listen To Your Radio Station" is a bluesy tune that is nearly an instrumental.  The opening vocal section, which begins "Listen to your radio station/Coolest music across the nation," ends with "Let's play some blues on this guitar" a little more than a minute in. The rest is instrumental.  This song is an interesting mix of blues with a bit of a techno feel.

"Save My Stuff" is straight blues with that fantastic, powerful harmonica. Like a lot of the best blues, it features simple, straightforward lyrics, in this case about riding the train home to the woman he loves. And then, "I'm gonna save my stuff for the woman I love."  There is nothing complicated here, but this is a song you can immediately get into.  You're on that train too, itching to get back to some woman, and enjoying the journey.  A very cool blues tune.

Perhaps the most surprising song on the album is "I'm A Lucky Man," a fun rockabilly tune with a definite 1950s style, particularly in the guitar, but also in the vocals. This song is a total joy. And while clearly revisiting an earlier form, the song feels like Now, more in its ability to change our perception of the Now than in trying to update the music to fit some idea of what's going on currently. I'm really just trying to say it's real, authentic, true. And that of course is timeless.  And there is some great stuff on guitar.

Alvin Lee follows the rockabilly tune with a pretty acoustic song titled "Walk On, Walk Tall."  This one too has very simple lyrics. It begins, "Walk on, walk tall/Be strong, don't fall/Walk on to the end/Be my friend." Simple, and wonderful. I really love the guitar in this one too. It's what makes this track one of my favorites.

This CD features three instrumental tunes.  The first, "Song Of The Red Rock Mountain" is a really nice acoustic instrumental. It somehow manages to feel simultaneously intimate and cinematic, creating a vivid landscape, taking me out of my normal surroundings (which is appreciated). This is one of the CD's short tracks (at just over two minutes), and it feels like it ends a bit too abruptly.

The album's second instrumental, "Down Line Rock," features a country rock rhythm mixed with blues, and then a seriously groovy short drum solo, with a bit of funky bass. Very nice.

The third instrumental is the hidden track, a sweet acoustic number that ends too soon.

Still On The Road To Freedom is scheduled to be released on August 28, 2012.

Posted by Michael Doherty at 2:39 PM