David Bowie: "The Rise And Fall Of Ziggy Stardust And The Spiders From Mars" 40th Anniversary Edition (2012) CD Review 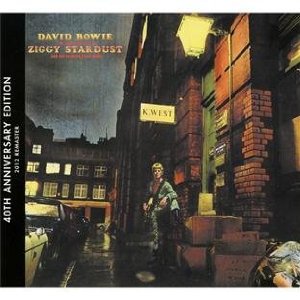 I'm not sure what I'd pick if forced to choose my favorite David Bowie album. But certainly The Rise And Fall Of Ziggy Stardust And The Spiders From Mars would be in the running, along with The Man Who Sold The World, Aladdin Sane and possibly Lodger.  Ziggy Stardust was my first Bowie album, and so it certainly has a special place in my world. And listening to it now still has that same effect it did on my first listen, which is astonishing in itself. It still somehow feels new and important, like a voice from a parallel universe that is at any moment going to collide with ours and take over (and you secretly want it to).  On this album, as on several others, David Bowie doesn't feel like a musician or singer - he feels like an emissary from some more intense and wise (and possibly depraved, in the best sense) people.

This record came out the year I was born, and that may be part of why I feel connected to it. And now it's been forty years (holy moly), and it still has a power over me. It transports me.  The album has been remastered for its fortieth anniversary edition.  As noted on the back of the album, it's "To be played at maximum volume" (a message my mom didn't appreciate during my teen years).

"Five Years" - The opening track fades in with a simple drum beat, and then slowly, but surely builds. With Bowie's urgent vocal delivery, until the suddenly quieter delivery of "I never thought I'd need so many people" (making that line feel so bloody honest). And then it builds again, before ending with a return to just the drums fading out.

"Soul Love" - I always love the moment in this song when the guitar really comes in in force.

"Moonage Daydream" - This is one of my favorite Bowie tunes. It's glorious. "I'll be a rock 'n' roll bitch for you" - amen. But my favorite part is right around the two-minute mark, that instrumental section. I could listen to that all day. And then the end is phenomenal. If you turn it up loud enough, your brain will melt into brilliantly colored candy, and the neighborhood children will feast on you.

"Starman" - This, of all of Bowie's songs, gets in my head the most often. I'm not sure why that is, but I often myself singing it. "I had to phone someone so I picked on you." I love that groove with the acoustic guitar.

"It Ain't Easy" - Now matter how ready I am for it, the moment when this song kicks in always jolts me. "It ain't easy!" Such force. It's great.

"Lady Stardust" - I've always found this song sexy and sad. It feels so fragile and vulnerable, and yet somehow invincible. The song really sounds like the character Bowie sings of.

"Hang On To Yourself" - This is the most fun tune on the album, a fast-paced little gem that always makes me dance around, wherever I am. "Come on, come on, we've really got a good thing going." Plus, it has the phrase, "tigers on vaseline" - how do you beat that?

"Ziggy Stardust" - I've never gotten tired of this song; it makes me happy every time I hear it. There are lines I love: "jiving us that we were voodoo," "making love with his ego" and "like a leper messiah."  Bowie creates such vivid images.

"Suffragette City" - This one seemed to be played the most in my childhood. I won't tell you just how I misheard the line "This mellow-thighed chick just put my spine out of place." This is my least favorite from this record, but of course it's still a darn good tune.

"Rock 'N' Roll Suicide" - This, in some ways, is the most interesting song on this record. It's so original, but also has an old rock 'n' roll element to it, and that combination works so perfectly as a climax toward which everything else has been building.  I absolutely love this song. And what a relief to hear, "Oh no love, you're not alone/No matter what or who you've been." I think, as a teenager, this was the song that made me keep playing the record. It would end here, and I'd feel a need to start it again.

The special 40th Anniversary Edition of The Rise And Fall Of Ziggy Stardust And The Spiders From Mars was released on Jun 5, 2012.  On that date, the album was also released on vinyl, with a special DVD included (the DVD has bonus tracks, including an instrumental version of "Moonage Daydream").