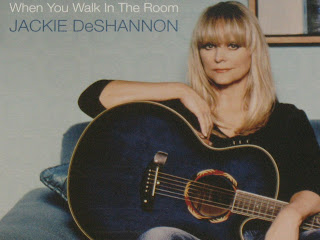 If you've listened to the radio or gone to the movies in the last forty-five years, you've heard Jackie DeShannon. She's an important songwriter in pop music. She even opened for The Beatles. And that was in 1964, before her biggest songs had even been written. Her songs have been covered by the likes of Van Morrison, Bruce Springsteen, The Byrds, Ella Fitzgerald, Marianne Faithfull, The Temptations and The Carpenters. She also recorded songs with (a pre-Led Zeppelin) Jimmy Page and has co-written songs with Randy Newman. She was inducted into the Songwriters Hall of Fame in 2010, a totally deserved recognition.

And now on her newest release, When You Walk In The Room, she takes some of her most well known and beloved tunes and gives them a new life. These are songs you know, songs you probably love. But these versions will cause you look at them anew, with a fresh perspective, as she has done. They're stripped down, played more in a folk vein than pop.

Jackie DeShannon wrote or co-wrote all but two tracks on this album (those two being "Needles & Pins" and "What The World Needs Now Is Love").

"When You Walk In The Room"

The album opens with "When You Walk In the Room." The guitar is so pretty on this track. And then when the vocals come in, it's immediately apparent that Jackie's voice is still beautiful, and full of emotion. The age in her voice only adds to the song's emotional impact. This song seems stronger than ever. By stripping the song down, her voice and lyrics are allowed to shine. She sings, "I close my eyes for a second, pretend it's me you want/Meanwhile I try to act so nonchalant."

In the original (recorded in 1963, when she was only nineteen), her vocal performance had an eagerness that has been replaced in this version with affection and warmth. It sounds more like genuine love, and that gives a slightly different meaning to the lyrics. It gives them more weight. Also, that early 1960s pop element is gone.

"Put A Little Love In Your Heart"

"Put A Little Love In Your Heart" is probably her most famous song, at least of the ones she wrote. It's a song I've always loved. Her voice is excellent on this version, but I have to admit I do miss the backing vocals on the chorus, especially the echo of "And the world."

It's an odd version because it still has the drums, so it's not completely stripped down. It's like half-stripped. I'd almost prefer if she'd gone all the way with this - just vocals and guitar - and given a truly raw version that would be completely different from the original. The original reached #4 on the Billboard chart.

"Put A Little Love In Your Heart" was also recorded by Annie Lennox & Al Green. That version was included on the soundtrack for Scrooged in 1988, and actually reached #9 on the Billboard chart. It features some glorious backing vocals over a 1980s pop rhythm.

"Put A Little Love In Your Heart" was written by Jackie DeShannon, Randy Myers and Jimmy Holiday.

"Bette Davis Eyes" was a huge hit for Kim Carnes in 1981, but it was written by Jackie DeShannon and Donna Weiss, and was recorded by Jackie DeShannon in 1974. Jackie does a bit of Kim Carnes in her vocal performance this time around, finding those places of raw emotion in her voice, particularly on lines like "She'll lay you on her throne" and "She'll take a tumble on you/Roll you like you were dice." This is a great song, and I really like this version.

Interestingly, this version is much closer to Kim Carnes' rendition than to her own original 1974 version, which has a kind of upbeat feel, fun backing vocals and even a horn section. It's like Jackie DeShannon is doing a cover of Kim Carnes' cover of her own song.

"Come And Stay With Me"

"Come And Stay With Me" was a big song for Marianne Faithfull in 1965, and her version is really pretty. But the version included here is so honest and soulful. It feels new. It's one of the strongest tracks on this album. Jackie's vocals are just wonderful on this tune.

"Needles & Pins" and "What The World Needs Now Is Love"

"Needles & Pins" is one of only two tracks on this release that Jackie DeShannon didn't write. It was written by Jack Nitzsche and Sonny Bono - but it was written for her, and she recorded the first version in 1963. It's the rendition by The Searchers that we all know and love. But on this album, Jackie really takes control of the song - the cry in her voice adding something new to the classic hit.

The other song she didn't write is "What The World Needs Now Is Love." That song was written by Burt Bacharach and Hal David, but it is her version that everyone thinks of, that everyone knows. Jackie originally recorded this song in 1965. That version reached # 7 on the Billboard chart, and was nominated for three Grammy awards.

The version included on this disc is great - just vocals, acoustic guitar and bass. And Jackie's vocals are as good as they've ever been on this song. Sure, some people think this song is a bit cheesy, but those folks should give this version a chance. And the fact is this song's message still rings true.

I love the raw power of her vocals on "Bad Water." This is probably the most powerful track on this album, and it's mostly due to her vocal performance. Here is a taste of the lyrics: "I've got to lose this feeling and change the way I'm living/I could use a helping hand/I'm walking through bad water."

The Raelettes - the backing vocalists for Ray Charles - recorded this song and released it as a single in 1970.

"Will You Stay In My Life"

When You Walk In The Room concludes with a new song, "Will You Stay In My Life." The instruments are more prominent on this track, but it's her voice that really sells this tune. And this song features some excellent lyrics: "I don't want your freedom/I don't want your soul/I'm just watching you moving/So easy and slow/I'll bring you white horses under stars that don't lie/And I'll ask you one question/Will you stay in my life."

Clearly, Jackie has not lost her ability to write a good tune, as this song proves. It stands up well next to these other famous songs. In fact, this track is probably my favorite from the album.

When You Walk In The Room is scheduled to be released on September 27, 2011 on Rock Beat Records.

Posted by Michael Doherty at 2:57 AM