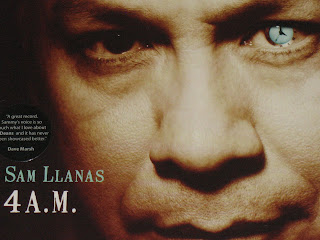 The new CD by Sam Llanas, founding member of the BoDeans, is essentially his second solo album - the first being 1998's A Good Day To Die under the name Absinthe. His new album, 4 A.M., which follows right on the heels of the official announcement of his departure from the BoDeans, is a good mellow record. These songs are sweet and at times truly pretty. This album is really about Sam's voice. These tracks are not over-produced, allowing his voice to connect directly with the listener.

A few of these songs were at one time or another recorded by the BoDeans, but the versions included here are much different, like new songs. All the songs, with one exception, were written by Sam Llanas.

The album opens with "Oh, Celia." This song has an immediate start, almost like you're being dropped into the middle of the tune - the moment you hit "Play," Sam's voice sings, "Oh, Celia/Won't you come out." No instrumental intro, no fade-in. And this works to grab you and pull you in right away. It's a sweet song, though every time he sings the line, "Would it be a sin" I can't help but think of "Can't Help Falling In Love."

Apparently this song was recorded by the BoDeans many years ago, but not released. It's a song about seeing a beautiful woman and wanting to get to know her. A love song about hoping this will be a love.

Sometimes the odd strained quality of Sam's voice seems like affectation rather than truth, and that's particularly true on "Shyne." You can hear it on lines like, "But I don't want to go there right now." Still, this song has some good lyrics like these lines: "If just for this one time/If just for this moment/If just for this one kiss/I will remember this/Under the city lights."

The album's title track, "4 A.M.," captures that magical time in the land of song. This song sounds like 4 a.m. It has a tired quality, but also captures the idea of a coming dawn. That time on the edge, when you're hovering between two days, possibly two worlds, two realities - where you can't hold onto the past much longer and maybe aren't quite ready for what's to come. Is it still the night before, or the next day?

Anyway, this song begins, "4 A.M./Here we are again/Every night it's just you and me." It's a time when you can't help but be open. Who has the energy for airs at 4 a.m.? Sam sings, "You know all my secrets/And you've heard my lies/4 A.M. can be the hardest time."

Someday I'm going to make a mix CD of songs that take place at 4 a.m., and this song will certainly have its place on it. There are many songs about that hour, including the incredible "Famous Blue Raincoat" by Leonard Cohen, "Four In The Morning" by Josh Lederman Y Los Diablos (one of my all-time favorite songs by one of my favorite bands), and "4 In The Morning" by Gwen Stefani. Other bands to have a song titled "4 A.M." include Closer Ocean, Kaskade and Avenged Sevenfold.

Another song on this very album that takes place at 4 a.m. is "The Only One," The opening lines are, "It's four in the morning/The hour of truth."

"All Through The Night"

The only cover on this CD is "All Through The Night," a song made famous by Cyndi Lauper, but written by Jules Shear, Pierre Delanoe and Claude Lemesle. This has always been my favorite Cyndi Lauper song. I was worried that I might not like this version because Sam Llanas had said, "The keyboards always ruined the song for me," and honestly that keyboard bit is my favorite moment of the song. But it's not like Sam really abandoned it. Instead, a somewhat muted version of that section is played on accordion. By the way, that's Bukka Allen, the BoDeans keyboardist, on accordion. In a way, his version is sweeter. Cyndi Lauper's version has something of an intensity, even a desperation, that is not present in this version. This version is truly pretty.

By the way, the BoDeans formed the same year Cyndi Lauper released this song on her wonderful She's So Unusual album.

"Nobody Luvs Me" is another song that was recorded by the BoDeans. It was included on Resolution (2004). And again, on the original BoDeans release, no words were misspelled - the title was "Nobody Loves Me." The version included here definitely has a sweeter sound; it sounds more like a love song. Because, after all, the complete line is "Nobody loves me like my baby." Here is a taste of the lyrics: "And at the end of a long day/It's your eyes and your smile/And I just want to hold you/A long, little while."

"Cherry O" features the wonderful lines, "You know I never meant to hurt you quite as bad as I did/I only wanted to hurt you a little more than you hurt me." This is a song about a troubled love, and the man wanting revenge. But, as he sings, "Love can make you do some of the craziest things." There is a definite sense of humor about this song. There is a nice harmonica part by Terry Vittone toward the end of this track.

This CD concludes with the beautiful "The Way Home." This is probably my favorite track. I love how it's kept simple. It has the wonderful raw feeling of a demo, including Sam counting the song off at the beginning. Here is a taste of the lyrics: "And I'm walking with my friends and my daughters and sons/Walking with the ghosts of the land/On the way home."

Musicians on 4 A.M. include Sam Llanas on vocals and acoustic guitar, Ryan Schiedermayer on percussion, Terry Vittone on guitars and harmonica, Matt Turner on bass, Bukka Allen on accordion, and Gary Tanin on strings.

This CD is scheduled to be released on October 25, 2011 on Inner Knot Records.

Posted by Michael Doherty at 3:17 PM