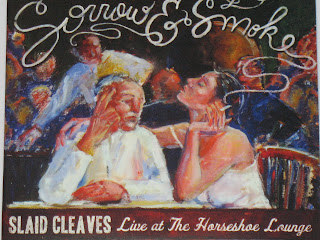 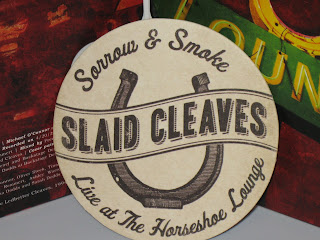 Sorrow & Smoke: Live At The Horseshoe Lounge is Slaid Cleaves' first live album, which is somewhat astonishing as he's been performing for more than twenty years and is known for connecting with audiences at his live performances. Slaid certainly knows his audience, and on this release he plays a lot of songs that have to do with bars, including a tune titled "Horseshoe Lounge." Drinking plays a part in many of the tunes, and this CD even includes a coaster (see photo).

Recorded on April 20, 2010 and June 29, 2010 at The Horseshoe Lounge in Austin, Texas (where Slaid makes his home), this two-disc set is full of great material. Sure, there is a sadness to a lot of his songs, but these songs aren't depressing. They're the kind of sad songs that make you feel good, and that's partly because Slaid has a good sense of humor, and he infuses his material with it. For example, in "Tumbleweed Stew," he asks the important questions, "Where can a good man go crazy? Where can a cowboy get stoned?"

Slaid Cleaves has a good rapport with his audience, who feel free to respond to him between songs (and even during songs). At one point, he asks if people want to hear any particular tunes. Folks shout out several requests. He responds, "Okay, that's enough. I can only keep two or three in my head at one time." He has a disarming honesty and sense of humor about himself. That adds to his appeal. The audience is right with him, and he's able to use that on a song like "Breakfast In Hell," for example, which includes an insane audience participation section. He also has a friendly troubadour voice which is instantly likeable.

The album opens with a song whose first verse is about a bar. But it's the second verse that I really love, with lines like, "Street girls hop from foot to foot/Tying to keep warm/Trying to pay down a few bills/Before the next big storm." Actually, this song is full of good lyrics, like "I would have gone with her that day/I just watched her as she drove away/I guess one of us had to leave/It's hard to believe."

Written by Adam Carroll and Slaid Cleaves, "Hard To Believe" was originally included on Slaid's 2009 release, Everything You Love Will Be Taken Away. With the opening track, Slaid shows that he's an excellent storyteller. He can paint a scene, a mood with ease. And pull in an audience.

The audience cheers as soon as it recognizes this song, named for the very venue where this album was recorded. This isn't an audience that sits still and remains quiet; they shout out and respond whenever they see fit, and they cheer even during this song. I love the line, "Maybe God left us out of the plans he made." This song was originally included on Slaid's 2000 release, Broke Down.

"Drinkin' Days" opens with the line, "My drinkin' days are over." Is there a sadder opening line? This song also mentions the venue, in the line "I used to hang out at the Horseshoe," which the crowd predictably cheers. This is a sad sort of tune of a man with a few regrets. I love these lines: "I never knew what time it was/Til closing time came round/My drinkin' days are over/But I'm still trouble bound." He relates the disastrous effects of alcohol and the lifestyle that sometimes accompany it. But the absence of alcohol doesn't solve the singer's problems; he's still "trouble bound."

At the end of the track he talks about how when he first moved to Austin he lived near the venue but didn't have the courage to go to the Horseshoe Lounge.

Slaid introduces "Below," a song that was requested but one he hadn't played in a while. He says that newer songs push older songs out of the set list. "The old songs - they get jealous. And when I try to do them after several months, they try to embarrass me."

The song has a somewhat darker, haunting western feel, and is about the effects of so-called "progress" on a small town. Here is a bit of the lyrics: "They tore down the church, and the schoolhouse burned/They dug up the graves, the wheels of progress turned." This song was originally included on Wishbones (2004).

"Sinner's Prayer" starts, "I'm not living like I should/I used to be a better man." It's a bluesy folk tune about disappointing yourself. There are some wonderful moments on guitar on this track. The audience is duly impressed, as you can hear in the hoots and applause. This is a seriously cool song, which first appeared on 2004's Wishbones. It was written by Slaid Cleaves and Rod Picott.

"Broke Down" is an audience favorite, and the folks at the Horseshoe Lounge cheer the moment it starts. (Earlier, when folks shouted out their requests, this was one that was called for.) The title track from his 2000 release, this song features some nice lyrics like, "There's a picture locked up in an old suitcase/Billy closes his eyes, but he still sees her face." It was co-written by Slaid's friend Rod Picott. It was this song - and this album - that really started to help Slaid get national attention. And it's a wonderful song, one of this CD's best tracks.

The second disc opens with "Cry," a sort of seemingly pessimistic and cynical love song that opens with the lines, "New love like a diamond/Like a twinkling star/But it's a whole lot of heartache/To get to where we are." This song features some great lines, like "Every blue sky fades to grey/Everything you love will be taken away." This is one of my favorites from this release. Oliver Steck plays trumpet on this tune, and it sounds wonderful, just perfect. This is actually a beautiful song, despite its negative-sounding lyrics.

Slaid does a series of yodeling songs on the second disc. He starts with "Horses," which he calls a "yodel warm-up song." The song features the line, "If it weren't for horses and divorces, I'd be a lot better off today." And of course there is some nice yodeling, which the crowd applauds. Slaid also once again mentions the venue, this time in the line, "He bought me a beer last night out at The Horseshoe Lounge." Though with this one, the lyric was changed for this performance; on the original release, it was the Lost And Found, not the Horseshoe Lounge.

Then he moves onto two yodel tunes written by Don Walser - "Texas Top Hand" and "Rolling Stone From Texas." He gets tongue-tied during "Texas Top Hand," and gives himself a little laugh. That song ends with some serious yodeling. But after the song he jokes that that one was an eight on the difficulty scale, and that now he was going to really go for it on "Rolling Stone From Texas." And he does. It's a fun rendition of the tune. Oliver Steck plays accordion on this one. It also features some nice work on guitar by Michael O'Connor. At the end, Slaid jokes, "I'm warmed up now. Let's start recording."

There is an untitled eleventh track on the second disc. It's not a song, but rather a snippet of conversation with Slaid, Michael and a guy who calls himself T-Bone.

Musicians on this release are Slaid Cleaves on vocals and acoustic guitar; Michael O'Connor on acoustic lead guitar and vocals; and Oliver Steck on accordion, harmonica, trumpet and vocals.

The painting on the CD cover is by Maine artist Kathleen Mack.

Sorrow & Smoke: Live At The Horseshoe Lounge is scheduled to be released September 6, 2011 on Music Road Records.

Posted by Michael Doherty at 8:34 PM