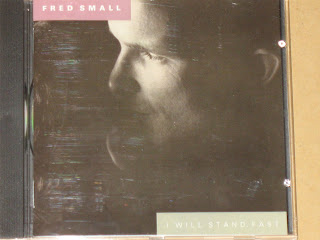 Fred Small is generally a very serious type of folksinger. He crafts good songs, but this is not an album that people would turn to in order to be cheered up after a tough day. The lyrics are often of a political nature, from Fred's honest desire to make society better. This is a noble endeavor, of course, but makes for some heavy listening at times. There are exceptions, like the uplifting and pretty "I Will Stand Fast."

"The Hills Of Ayalon"

The album opens with "The Hills Of Ayalon," a very serious song based on actual workshops held in Israel where Jewish and Arab youths can learn about each other. The song ends on an optimistic note.

"Diamonds Of Anger" is another serious song, written while Nelson Mandela was still imprisoned in Pollsmoor Prison. The chorus is "Crossroads/We are diamonds of anger we are brilliant gold/Every blow makes us stronger the chain cannot hold/We are rocks against tear gas we are songs against guns/We are life against terror we have already won." These are good lyrics.

"I Will Stand Fast" Title Track

"I Will Stand Fast," the title track, is one of the two best songs on the album. When he would perform this one in concert, he'd have the audience sing the lines "Cold wind beating out of the past" and "Hold on, I will stand fast" during the verses, and it sounded beautiful. This is a pretty and optimistic song, and stands out partially because of that. The chorus is "I will stand fast, I will stand fast/You are safe in the daylight at last/Nightmare and fear, they have no power here/I will stand fast."

"At The Elbe" is a song about how the United States and Russia were once allies during World War II. Keep in mind that this album was released in 1988, during the Cold War.

"Every Man" is the other of the two best songs on this album. Here is a taste of the lyrics: "Came the war to my generation/Government said son it's your time make us proud/Some went to jail some went to Canada/Some went over some went crazy some went down."

"Scott And Jamie" is a song about a gay couple in a long-term committed relationship who adopt children. One might wish this song were dated by now, but sadly after this nonsense with Measure 8 in California in 2008, this song is just as pertinent as ever. It's seriously depressing. (Measure 8, which was ironically and horribly called the "California Marriage Protection Act," denied same-sex couples the constitutional right to marry.)

Here is the chorus: "Love is love no matter who no matter where/Love is love and a child knows when it's there/They can pry away the fingers that graced these walls with dirt/They can pull us apart they can lie oh they can hurt/But love leaves a trace and the heart holds a place for love's return."

Scott and Jamie are the names of the two boys that the couple has adopted, and who are eventually taken away by the state. It's a beautiful and sad song.

The album ends with "This Love," an unabashed love song, and probably the weakest song on the album. It tells of all the changes that would happen in the world if for just one moment everyone on the planet could feel the love he feels. It's a nice sentiment, but it really is the height of cheesiness. Cris Williamson performs the duet with Fred Small on this song.


I Will Stand Fast was released on Flying Fish Records. Fred Small released several other albums, including Love's Gonna Carry Us (1981), No Limit (1985) and Jaguar (1991).
Posted by Michael Doherty at 5:31 PM