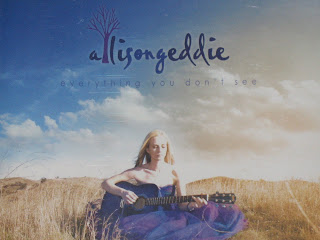 Allison Geddie's album Everything You Don't See has a lot going for it. The most obvious is Allison's voice. Her voice is strong and pretty, and she's able to find some wonderful nuances in certain songs. Also, the voice is never lost in the instrumentation. The lyrics are never muddied, which is great because there is some decent songwriting on this album. This CD also benefits from some beautiful cello parts by Tina Guo.

"Messed It Up Again"

Allison Geddie opens the album with "Messed It Up Again." The first line of the song, and thus the first of the album, is "I'm waiting for the wings to grow." This line perfectly sets up the album, for there is something almost angelic about Allison - about her voice, her style - and yet she's still completely grounded in this life, in this world, as these songs will attest to.

"Messed It Up Again" has some excellent lyrics, like these lines: "I messed it up again/And don’t you try to mend/What I’ve done to you."

"Take A Shot" sounds somewhat like Mieka Pauley, particularly in the vocals - not just the voice, but the phrasing. Allison sings, "Take a shot at me/I promise I won't run away." The song has a strange break approximately two minutes in. It's a song about a simple and beautiful moment, and it ends with the excellent line, "I'll just stand here and let you see me."

"Leave With Me" is a gorgeous song which builds nicely. The vocals are beautiful, especially in the section that goes, "I spent all this time today/Expecting you to show/And now I feel miles away/'Cause you have let me go." And the cello sounds particularly good on this track.

"Fixing Me" is another song that is reminiscent of Mieka Pauley, in the vocals and mood. It's a beautiful song, possibly the best on the album. The song is mainly acoustic guitar and vocals, with the cello backing her up. This song also features the great line, "It feels like life is just one long road/Of fixing me."

"Walking Slow" is a pretty song, and the closest thing to a title track with the repeated line, "I wanna see everything I don't see." Stevie Black plays strings on this track. Chris Marin plays the cymbals (though in the liner notes it's listed as "symbol swells").

"Divided" starts with what sounds like putting a needle on a record - that static and scratchy sound of a record. The vocals sound great on this song. The mix is just right, so that the vocals are louder than the instruments, because it is the voice that drives this song (and most of the album).

Here is a taste of the lyrics: "But there was no fire/I had no desire/And I've become a liar inside/So black no tension/I couldn't flinch/And I swear/I've been divided ever since."

For "In This City," there is more of a full band sound. In this song, Allison varies her vocal performance perhaps more than on the other songs. This is one of the strongest songs on the album, with some interesting changes and rhythms. The song ends with these lines: "Yeah don't you ask me/If I like it here/ In this city/You will forget that we're at war/But in your head you know/Exactly what you're fighting for/And do you like it here?"

"What We Lived For (The Starbucks Song)"

Allison Geddie concludes this album with "What We Lived For (The Starbucks Song)." Early in the song there is the great line, "And we'd look for our fathers/In nineteen year olds," which is then repeated at the end. The cello sound great in this song, and Allison's voice is so pretty as she sings, "Time flies/But it's never ever too late."


All of the songs on Everything You Don't See were written by Allison Geddie. Allison Geddie does the lead vocals and acoustic guitar on all songs. Tina Guo plays cello. Greg Suran plays guitar and bass on "Messed It Up Again," "Take A Shot," "In This City," "Set Us Free" and "What We Lived For (The Starbucks Song)." Mike Krompass plays guitar and bass on "Leave With Me," "Divided" and "The Need."

Greg Critchley is credited as playing "all other instruments." He also produced the album.

Allison Geddie recently opened up for Blue Oyster Cult in Woodland Hills. Perhaps an odd choice for an opening act for that rock band, but Allison drew the audience in. She performed a few songs from this album, including "In This City," "Leave With Me" and "Fixing Me."