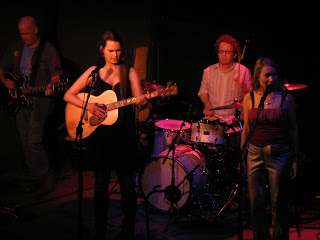 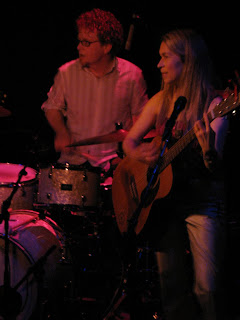 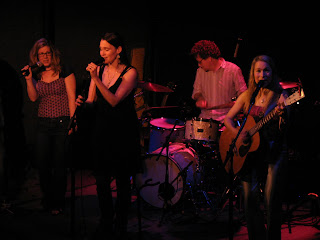 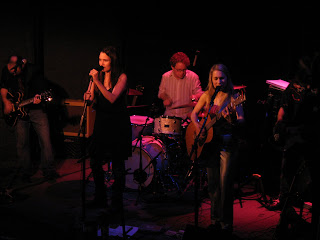 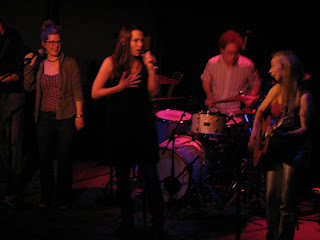 I just got back from the special full-band Nields concert at the Iron Horse, part of their 20th anniversary weekend extravaganza (which also included an open mike, a family show and even a scavenger hunt). And as i expected, it was an incredible show. Two solid hours of music spanning the band's entire career.

The show started with an acoustic number, performed by just Nerissa and Katryna unmiked: "This Happens Again And Again" (from their 1992 release 66 Hoxsey Street) They joked after the song that it reminded them of a show they did at the Iron Horse in 1995 when the power had gone out due to a snow storm. (By the way, my brother was at that show.)

Then Dave Chalfant (there are actually three Daves in this band) joined them on bass for "Just Like Christopher Columbus" (which i think is the first Nields song i ever heard). That song was included on both their 1993 release Live At The Iron Horse Music Hall and their 1994 release, Bob On The Ceiling. (A live version was also included on The Old Vienna Tapes Volume Two.)

Dave Hower (the second Dave) sat in on drums starting with a Sinead O'Connor cover, "Black Boys On Mopeds."

The third Dave - Dave Nields - played guitar on several songs, including great versions of "Bulletproof" and "Taxi Girl" and a wonderfully energetic rendition of "Gotta Get Over Greta."

Paul Kochanski joined them on bass for "James," at which point Dave Chalfant moved to guitar.

Special guest Dar Williams joined The Nields on backing vocals for "I'm So Lonesome I Could Cry," "The Endless Day" and "Easy People."

Toward the end of the set, The Nields performed a new song, written specially for the band's 20th anniversary. The song is called "You Come Around Again," and it's a wonderful song that describes their lives and careers at this point. The lyrics contain a reference to Bob Dylan's "My Back Pages" in the lines, "Oh, but I was so much older then/I’m younger than that now."

After the first encore of "Gotta Get Over Greta," Nerissa and Katryna ended the show as they began it, with an unmiked song. This time they performed "May Day Carol," and they did it acappella at the top of the stairs toward the back of the venue. A sweet ending to a fantastic concert.