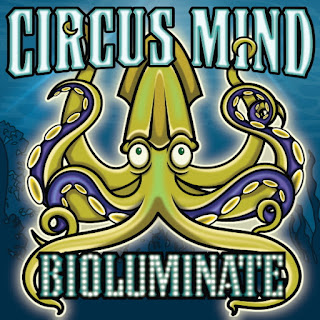 Circus Mind was founded by lead vocalist and keyboardist Mark Rechler a couple of decades ago. This group hasn’t released a lot of albums during that time, but the lack in quantity is made up for in quality. The band’s new release, Bioluminate, contains five original numbers written by Mark Rechler, and each one is worth listening to. Based in New York, the band, as of this recording, is made up of March Rechler on keyboards and vocals, Jaime Scott on guitar (though he is not listed on the liner notes for this release), Chris Crosby on bass, Dan Roth on drums, Steve Finkelstein on percussion, and Michael Amendola (the group’s newest member) on saxophone. As with the group’s 2021 release, Joy Machine, this disc features several guest guitar players, including Nels Cline.

The disc opens with “West End Road,” a cool, groovy, funky number, featuring some fun stuff on keys, as well as a good lead on guitar. David Berg plays guitar on this track. Its opening lines are “I’m all by myself/I don’t belong here/I’m all by myself/I don’t belong.” But the energy of this song tells me these guys can make their own place wherever they are, that they belong wherever they want to be. Also, this track features a horn section. Joining saxophone player Michael Amendola are Pablo Rodriguez on trombone, Damien Pacheco on trumpet, and Richard Bonzer on baritone saxophone. The vocals at certain moments might call to mind Mick Jagger. “I done lost my shoes/And my wallet too/And I lost my friends/I’m so ashamed/I was playing at the bar/I guess things went too far/Now I lost myself.” That’s followed by “Darwin’s Sister,” a jazzy, bluesy, funky journey through space, like a visit to an outer space dance hall. This one also features guitarist David Berg, who delivers another exciting lead. I also really like the percussion, particularly during that jam. The lyrics of this song actually include the band’s name: “I’m gonna blow your circus mind.” Another playful line stands out, coming just before the end of the track: “She’ll turn me from a monkey right into a man.”

Marc Paradis then joins the group on guitar for “Baby Come Back Down,” another fun number. Much of the fun comes from its rhythm, its delicious groove. And are they actually singing “chickaboom”? How can you not like this track? “Red wine, barrel of laughs/I think I just lost my better half/Baby, come back down.” That is followed by “Miss Fortune,” a darker, slower number. The play on “Miss” and “Mis-” in the song’s title reminds me of Jim Infantino’s “Little Miss Communication” (and earlier than that, there was “Miss Miscarriage” in The Hotel New Hampshire). Nels Cline (from Wilco) delivers some excellent work on guitar on this track. As the track begins, there is a late 1960s vibe to the guitar work. The best guitar work comes during the instrumental section in the middle. Fantastic stuff. The disc concludes with a totally enjoyable number titled “Vampire Blues,” this one featuring Matt Godfrey on guitar. It has a more playful vibe, with lines like “I’ll eat pills and poisons, you can throw ‘em down my throat/But I’ll lose my mind if you sing another note/I’ll keep your warm all night, but please don’t let me see the sun come up.” This track also features some really nice work on keys. At one point, this one seems to be ending, but then the bass leads the group into a rousing final section. By the way, this is the only track to feature Matt Fox rather than Chris Crosby on bass. Chris Crosby died before this album was completed.

Posted by Michael Doherty at 2:18 PM