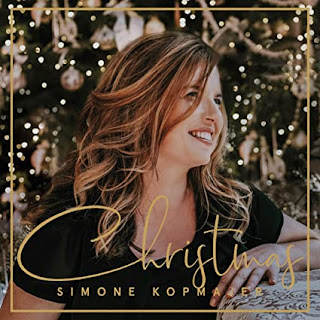 I was turned onto Austrian vocalist Simone Kopmajer a couple of years ago when she released Spotlight On Jazz, an excellent album combining standards and original material. She has a wonderful and warm voice, and now applies her talent to holiday material on her new album, Christmas. One thing I love about this album is that she includes some Austrian songs here in addition to the usual fare, and those tracks help make this album something truly special. Also, a few of the songs here are presented as duets.

The album opens with “Santa Baby,” one of my personal favorites among the usual Christmas songs. And from the moment this rendition starts, I love it. This version has a romantic flair, and Simone’s vocal approach is part sweetness, part sexiness, which is perfect. I’m not sure what to ask Santa for this year, as this country already got the best gift in Joe Biden’s victory, but I certainly wouldn’t turn down a sable, so slip one under the tree for me. I also love that piano work on this track. That’s John Di Martino, who earlier this year released a tribute to Billy Strayhorn titled Passion Flower. “Santa Baby” is followed by “Jingle Bells.” I’ve mentioned this before, but “Jingle Bells” is not one of my favorite holiday songs. However, Simone delivers a fairly cool rendition here, one that moves with a good energy and includes a bit of scat. I appreciate the scat, especially as the song’s lyrics are rather lame. This track features some delightful work by Boris Kozlow on bass, keeping things bopping along.

As I mentioned, on this album Simone Kopmajer sings some songs from Austria. The first of these is “Leise Rieselt Der Schnee,” which is a gorgeous number, in part because of those excellent backing vocals by The Schick Sisters, giving the song something of a gospel sound. That’s followed by “Baby, It’s Cold Outside.” I love this song, and the so-called controversy surrounding it in recent years is absolutely ridiculous (and John Legend’s rewrite is atrocious). Viktor Gernot takes the male part in this fun and delightful duet, and during that wonderful lead on piano, Simone and Viktor do a bit of vocal riffing. In the second half, Simone’s delivery of “The answer is no” made me laugh aloud. This is a really good rendition, and it ends with Viktor telling her seductively, “You’d better stay.”

I don’t think anyone can dispute that A Charlie Brown Christmas is the absolute best television holiday special, and that is due largely to the music composed by Vince Guaraldi. On this album, Simone Kopmajer delivers a pretty and warm rendition of “Christmas Time Is Here.” She then delivers an original number, “The Most Wonderful Time,” a song more in the pop realm, with a bright sound, and with some lyrics that seem very fitting after Donald Trump’s defeat: “It is wonderful, something like a miracle/The world is celebrating – all our troubles fading.” On this track, she is joined by Anna Catharina. Simone follows that with a sweet and loving rendition of “Have Yourself A Merry Little Christmas,” putting us in the right frame of mind for the holidays, the track’s vibe and execution being romantic and gentle and passionate. There is also more nice work on piano, and I dig that bass line at the heart of this version.

We then get our second Austrian song, “Es Wird Scho Glei Dumpa,” which translates as “It Will Soon Be Dark.” As I understand it, this song is usually presented as a lullaby. This version by Simone has something of that gentleness, but also a bit of a pop energy. That’s followed by “Driving Home For Christmas,” a rather recent addition to the holiday catalogue, written and originally recorded by Chris Rea in the 1980s. What I love about this rendition is that saxophone. And the lines “Take a look at the driver next to me/He’s just the same, he’s just the same” provide a good reminder when the stress of the holiday takes over. And this year, if you are planning on going home, driving seems to be the best method of travel. Who wants to be stuck on a plane during a pandemic? Be safe out there, folks.

“The Christmas Song (Chestnuts Roasting On An Open Fire)” is delivered as a duet with Allan Harris, giving it more of a romantic vibe. I also really like the rhythm section here. Simone Kopmajer then delivers a pretty cool rendition of “Feliz Navidad,” the bass having a strong presence. This version features some interesting work on piano. That is followed by “My Grown-up Christmas List,” another recent Christmas song, this one composed by David Foster and Linda Thompson-Jenner. That adult Christmas list includes “No more lives torn apart/That wars would never start/And time would heal all hearts.” Simone also gives us a delightfully cheerful rendition of “White Christmas,” featuring a nice lead by Dominik Fuss on trumpet. “Oh Heiland, Reiss Die Himmel Auf” is one that I don’t recall ever hearing before. It has a more somber tone, with some exciting moments. This is another duet, this time performed with Willi Resetarits. That’s followed by “Is Finsta Drausst,” a beautiful number, and another that I don’t think I’d heard before, but one that deserves a spot on my holiday play list from now on. The album concludes with a rendition of “Silent Night” that is sung in both English and German. It has an unusual introduction, and then the lyrics are delivered gently, lovingly. It ends up being a beautiful rendition, with some wonderful backing vocals. And I love that work on dulcimer in the second half. This is an excellent track with which to wrap up the album.

Christmas is scheduled to be released on CD on November 20, 2020.

Posted by Michael Doherty at 11:37 AM