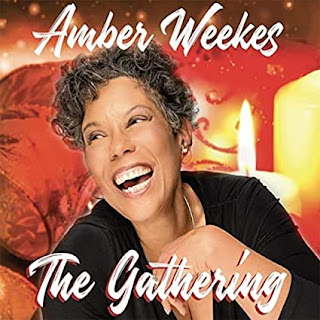 It seems that this year even more Christmas albums are being released than usual. And perhaps that’s because this year we desperately wish to celebrate. Celebrate something, anything. It has been one hell of a crummy year, and we need a release. Sure, the election results were a cause of some relief, but even the election revealed a depressing, dark side to this country, that there are more than seventy-three million racist cretins among us. So, even though the holiday is going to be a scaled down affair this year, so many of us are looking forward to it, looking forward to that sense of peace and warmth that is associated with the time. Holiday music can help put us in that place early, and help us remain there longer, and perhaps that’s why so many holiday albums are coming out this year. I’ve heard that lots of folks are putting up decorations early this year, probably for the same reason. Amber Weekes’ new album, The Gathering, presents some classic holiday material, designed to give us that warm and hopeful feeling, something we crave more than usual.

The album opens with “The Christmas Waltz,” a song written by Jule Styne and Sammy Cahn, and originally recorded by Frank Sinatra. It has a pretty, romantic sound, and Amber Weekes’ delivery is full of love. “It’s that time of year/When the world falls in love/Every song you hear/Seems to say merry Christmas/May your New Year dreams come true.” Ah, so sweet. Josh Nelson provides some wonderful work on piano. And I love Andrew Carney’s lead on trumpet in the second half of the track. Amber Weekes switches to an intimate, playful whispering at the end. She then gives us a somewhat unusual take on “I’ll Be Home For Christmas,” which was a hit for Bing Crosby. This song certainly has a greater relevance this year, when most of us will not in fact be home for Christmas, except in our dreams. And shame on those who are traveling despite the pandemic. Amber Weekes sings those extra lines at the beginning that Johnny Mathis and The Carpenters included in their versions. This version also includes some nice percussion by Munyungo Jackson, and some good work on guitar by Paul Jackson, Jr. That’s followed by “My Romance,” which isn’t really a Christmas song. It was composed by Richard Rodgers and Lorenz Hart for the musical Jumbo. But Amber Weekes gives it a holiday vibe, even including a little nod to “Jingle Bells” at the beginning. Her version also has a dreamlike quality, and features strings.

“I Saw Mommy Kissing Santa Claus” is a rather goofy song, but Amber Weekes delivers a truly delightful and cool rendition. It features a really good, popping bass line by Adam Cohen and some nice work on saxophone by Rickey Woodard, but it is her vocal performance that makes this version so enjoyable. She completely sells it. There is even a playful spoken word section at the end. “Well, folks, I’ve got to go/My mother is giving me that look.” This might be the best version I’ve heard. She changes gears with “Some Children See Him.” The instrumental introduction to this track is beautiful, and is something that can transport you, which I love. That is my favorite section of this song. Ernie Fields, Jr. is on bagpipes on this one. Then I love what Jacques Lesure does on guitar at the beginning of “What Are You Doing New Year’s Eve,” a song written by Frank Loesser, and originally recorded by Margaret Whiting. Amber Weekes’ vocal performance is playful and seductive and romantic, just the exact thing we want as we approach the New Year. Just listen to the way she delivers the lines “Maybe I’m crazy to suppose/I’d ever be the one you chose.” A couple of minutes in, we get more wonderful work on guitar, a lead that I completely love. This is my personal favorite of the disc’s tracks. At the end, there is a spoken word section, offered in a sort of whisper: “How about a great big party? What do you think? No?” No, not this year, sadly.

There is a whole lot of joy to the classic holiday number “Winter Wonderland,” particularly the way Amber Weekes delivers it. I dig those touches by Rickey Woodard on saxophone. And, hey, who is Parson Brown anyway? Interestingly, near the end she also includes the revamped lines about pretending the snowman is a circus clown. That is followed by “Silent Night,” which is probably the most beautiful song associated with Christmas. Here Amber Weekes offers an interesting rendition that begins like a lullaby, and then develops a kind of pop vibe. “Let It Snow” is such a cheerful track. How can you keep from getting in the holiday spirit when hearing Amber Weekes’ wonderful rendition of this song? I really like that instrumental section too, particularly Andrew Carney’s work on trumpet. The album concludes with its title track, an original number with lyrics by Amber Weekes. It’s kind of an odd pop song, though with a positive message. And I really like Mark Cargill’s work on violin.

Posted by Michael Doherty at 10:56 AM