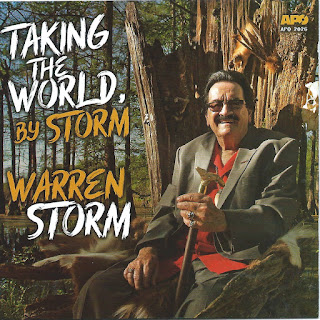 Warren “Storm” Schexnider is a wonderful force out of Louisiana, and has been recording excellent music since the 1950s. At age 82, he is still doing what he does best. His new album, Taking The World, By Storm, finds him revisiting some material he recorded earlier in his career, and proving he still has the vocal power and flair to make these songs work. Seriously, there are some fantastic vocal performances on this album. The band backing Warren “Storm” Schexnider includes Eric Adcock on piano, Roddie Romero on electric guitar, Derek Huston on saxophone, Chris French on upright bass, and Gary Usie on drums. There are also a few guest musicians and vocalists on certain tracks.

The album opens with “Long As I Can See The Light,” one of my absolute favorite CCR songs (second in my mind only to “Someday Never Comes”). It’s an interesting choice to open the album, for it has always felt more like a late-night tune to me, something to play toward the end of a night; also, the song has a different feel from most of the rest of the material on this album. Warren Storm delivers a really good version of it, with a heartfelt vocal performance. And I love that moment when the sax comes in.  So nice. And on this track Warren is joined on vocals by none other than John Fogerty, so you know he got it just exactly right. This is something special, no question. He follows that with “Mathilda,” a song written by George Khoury and Huey Thierry, and originally recorded by Cookie And His Cupcakes back in the late 1950s. This new rendition by Warren Storm has a delicious early rock and roll vibe, the piano taking a deservedly prominent place. Marc Broussard joins him on vocals for this one. This track also features some really cool work on slide guitar by guest musician Sonny Landreth.

Warren Storm continues in that general vein with a delicious version of Earl King’s “Lonely Nights,” his vocals sounding so damn good. “If you would only come back home/Let me take you in my arms/Yes, you know I could be so happy/I wouldn’t be so all alone.” I also dig that instrumental section, with the piano again driving things forward. There is a bit of silliness at the end of the track. Then we get a groovy rendition of Fats Domino’s “Let The Four Winds Blow.” It’s always a good time to listen to some Fats Domino tunes, and this version has a slightly relaxed vibe, with that distinct New Orleans feel, and features some nice stuff on sax. Things then turn sweeter with a pretty rendition of Bobby Charles’ “Tennessee Blues,” featuring Beau Thomas on fiddle and Richard Comeaux on pedal steel. This is for me one of the disc’s highlights because of Storm’s emotionally powerful and moving vocal performance. Warren Storm had recorded this one before, releasing it as a single in 1983.

“Mama, Mama, Mama” is a lot of fun. This song is one he released as a single back in 1958, the flip side to “Prisoner’s Song,” and in 1983, coupling it with “Tennessee Blues.” On this new version he is joined on vocals by Yvette Landry, who also produced the album. Landry also wrote the album’s liner notes, explaining how the project came about. In addition, she has written a book titled Taking The World, By Storm: A Conversation With Warren “Storm” Schexnider, The Godfather Of Swamp Pop (the cover of which uses the same photo gracing this album’s cover). I need to pick up a copy of that book. Warren Storm follows “Mama, Mama, Mama” with “In My Moments Of Sorrow,” another tune he had recorded in the late 1950s, using it then as the flip side to “Troubles, Troubles.” This new rendition features Willie “Tee” Trahan on tenor saxophone, and that moment when the saxophone begins its lead is one of my favorite parts of the track. That is followed by “Prisoner’s Song,” an enjoyable tune that should get you swaying, if not dancing.

What a fitting choice to follow “Prisoner’s Song” with a Merle Haggard tune. “My House Of Memories” features another seriously good vocal performance. It is incredible that this guy is 82. This is a song that Warren Storm has recorded before, including it on his Night After Night LP, as well as on the Warren Storm And Bad Weather album At Last.  At the end of this version, he asks “Was that any better?” Indeed! I think this version is better than the previous two. There is something playful and fun about “Troubles, Troubles,” making it another of the disc’s highlights for me. Also, Willie “Tee” Trahan joins him on tenor saxophone on this track. Warren Storm wraps up the disc with “Raining In My Heart,” which features yet another fantastic and moving vocal performance. The first time I put this album on, my girlfriend reacted audibly to the lines “If you would only come back home/There’d be no need for me to cry,” being moved by his delivery just as I was.

CD Track List
Taking The Word, By Storm is scheduled to be released on December 13, 2019 on APO Records.
Posted by Michael Doherty at 10:21 PM