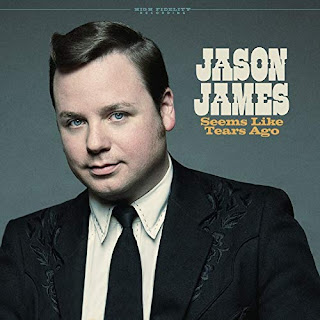 At a certain point in my life (my late teens, early twenties) I said that I hated country music. It wasn't exactly true. I loved Johnny Cash, Dolly Parton, Merle Haggard, Buck Owens and those folks. What I didn't care for was that bland country pop that seemed dominant at the time. That music felt false to me, more of a pose than coming from the heart, and lacking integrity. And so for a while I steered clear of new country music. But fortunately those days are gone, and there is a whole lot of great country music being recorded and released. And some of it has more of a classic style that I've always loved, like Jason James' new album, Seems Like Tears Ago. Featuring all original material, written by Jason James, this album can hold its own alongside the those great country classics. Even the album cover has something of a nostalgic quality, both in the style of printing of his name and in the photo on the back, where he is pictured with stacks of records. Joining Jason James on this release are Cody Braun on fiddle, T Jarrod Bonta on piano, Chris Cook on rubboard, John Evans on electric guitar and jaw harp, Jacob Marchese on standup bass, Geoff Queen on steel guitar and electric guitar, Rich Richards on drums, and Patrick Herzfeld and Sara Stein on backing vocals.

The album kicks off with its title track, and immediately I fall for its classic sound, which feels both familiar and fresh. It is Jason James' voice that really sells this track. It is authentic and true, and so timeless. Hey, honesty never goes out of style. "It killed me to see you go/But you said it had to be so/It seems like tears ago." I also really like the backing vocals, and that sweet fiddle. "You left these arms of mine/You find more comfort in the warmth of the wine." "Seems Like Tears Ago" is followed by "I Miss You After All," a song about pretending to move on after a relationship, one of those perfect topics for a country song. "I even tell myself tomorrow's a brighter day/But every night when the teardrops fall/I can't fool myself/I miss you after all." Still, it is not a depressing song; it has a rather cheerful vibe. And hey, there is something positive about self-awareness, right? This track features some really nice work on steel guitar.

"Move A Little Closer" has a bit more of a rock element, and Jason James employs a different vocal approach here. It's fairly steady and in control. "When I start a-talking, it's best you start a-listening/'Cause honey baby this aint' right/You'd better move a little closer before I say it's over." Even though of course it is the woman who is really in control, as we learn when he sings of sleepless nights and so on (and listen to how his vocal approach changes on those lines, a nice touch). I also love that lead on fiddle halfway through. We then get "We're Gonna Honky Tonk Tonight." Honky tonk as a verb? Well, maybe. This one has that delicious classic style, with that old rhythm and plenty of great stuff on steel guitar, and just a bit of twang to his vocal delivery. There is a sweet and innocent vibe to this one that I appreciate. That's followed by "Achin' Takin' Place," one of those great sad country numbers of deceit and a hurt heart, featuring a moving and effective vocal performance. So good. Plus, I am really fond of that piano work. This is one of my favorite tracks.

When a song opens with the line "Everywhere I go, there you are," it can go one of two ways, right? Either that's a wonderful, beautiful thing, or it is the cause of perpetual heartache and annoyance. Being a country song, you'd likely expect it to be the second. But no, "Simply Divine" is a country love song. "Hand in hand, we walk as one/And it's good to know we'll always be together/Until our days here are done." Ah yes, this is a song that looks right into a partner's eyes and sees a lifetime stretching both into the past and future. A wonderful thing, to be sure, and a beautiful song. Jason James then moves in the other direction with "Coldest Day Of The Year," a song about life after the end of a relationship, with him singing "I never got over her saying goodbye/And every passing day is colder than the last/How I thought with time my heart could heal/As time drags on, I start to fear/Every day she's gone is the coldest day of the year."

The music turns more upbeat with the fun "Cry On The Bayou." It may seem odd to dance around to someone singing, "I'm gonna cry, I'm gonna cry," but this song has that Louisiana thing that always makes life seem like a party. "Now I'm as lonesome as a boy can be/Even my shadow's done run off on me." That's followed by "Foolish Heart," a song of love for someone who isn't good for you. Most of us have experienced that at one time or another. "Foolish heart/Play the part/Of the fool for her/That you will always be." I love those touches on piano. The album then concludes with "Ole Used To Be," which has a relaxed, easygoing sound. "I'm trying to make the best of a bad situation/Though troubles weigh heavy on my mind/An ole used to be has come back to town/And the last few nights you ain't been around." Uh-oh. "I hope your ole used to be is still him, not me."

CD Track List
Seems Like Tears Ago was released on October 4, 2019 on Melodyville Records.
Posted by Michael Doherty at 10:51 PM