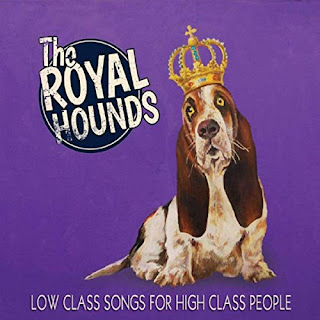 If you are in the mood for some fun, lively, not-too-serious music played by talented musicians, you should check out The Royal Hounds' new album, Low Class Songs For High Class People. It is full of songs that should make you smile, even laugh, songs you can also dance to. Some of these songs are certainly on the goofy side, and that is just fine with me, particularly these days when reality has turned ugly. But don't worry, there is an intelligence behind this music. These are not dumb songs. Based in Nashville, this group is the trio of Scott Hinds, Matheus Canteri and Scott Billingsley. The disc features mostly original material, the majority of it written by Scott Hinds. There are also some guest musicians on this release, including Rory Hoffman on accordion and organ, Eddie Lange on pedal steel and Robert Gay on trumpet.

"The Walk," the disc's first track, opens with a bang and then very quickly becomes a rather silly tune poking fun at the rock and roll tradition of songs that introduce new dance sensations. These lyrics should give you an idea where these guys are coming from: "You put your left foot forward/Then you follow with the right/You repeat the thing again with all of your might/You can walk to the kitchen/Or walk down the hall/Walk across the dance floor/To lean against the wall." This one makes me laugh out loud, particularly those lines. Yeah, it's a dance song for people who don't or can't dance. I'm curious how the fans approach this one at shows. Do they stop dancing and just walk around? I hope to see this band in order to investigate and report back to you all. Well, "The Walk" is followed by "Whackity Do," and when it opens it seems like another goof on a dance craze. But "Whackity Do" is not a new dance trend. Rather, it seems to be about another of our favorite pastimes, drinking.

My personal favorite track on this album is "The Parthenon," which recreates the temple as a brothel and dance club. And why not? It's populated by "a hundred thousand girls who will be yours 'til dawn/If you last that long." I love this track's vibe. It is ridiculously fun, and it features some totally wonderful work on guitar. Plus, it has a wild and engaging vocal performance, like a carnival barker pumped on some cocaine cocktail. And then like halfway through there is the addition of some delightful backing vocals. And let's not forget the accordion. I love this song. It's followed by cool instrumental tune (well, instrumental except for shouts of "Hey") titled "Pororoca." What is it about those surf instrumentals? Have you ever heard a bad one? Me neither.

Then we're back to goofy material with "Tweakers From Outer Space," about a different sort of cheesy low-budget science fiction creature, described here as having "matted hair and a hungry stare." When Scott Hinds shouts out "Brothers and sisters" toward the end, as the song dives into its silliest, most delightful section, for a moment I'm reminded of that live version of Neil Diamond's "Brother Love's Traveling Salvation Show" from Hot August Night. But don't worry about that. What you need to worry about are the aliens who are "coming to raid your medicine cabinet" for "anything that just happens to start with the letter P." And, oh man, that section even includes a nod to a Kenny Loggins hit from the 1980s.

"Pizza Party" is a short, enjoyable song about eating pizza. Or could it be a euphemism, what with him saying they'll "pound and pound and pound the dough" and all? This track features more good work on guitar. "I'll ruin your mascara with a squirt of marinara." The Royal Hounds dip more into the country realm with "Road Scholar," the title obviously a play on Rhodes Scholar. It's a song about being a trucker and having intimate and extensive knowledge of the nation's roads. Then "Manteiga Braganca" comes on strong and doesn't let up, at least not for a minute and forty-four seconds. It's a delicious, fiery instrumental number featuring some fantastic guitar work. Short, but oh so good. That's followed by "Herbie The Butterfly," a lively number with some good changes to keep things interesting. This one reminds me of the first time I drove into California, when dozens and dozens of butterflies ended up perishing on the front of my van. There was no way to avoid them. Actually, it's a depressing thought to revisit. Thanks, Hounds.

"Chinese Buffet" is a goofy and enjoyable country number about eating Chinese food. "We can have it all again if we wait about an hour." This one was written by Bill Cabage. The album then ends with a cover of "Ghost Riders In The Sky." On the back of the CD case, it is listed as a bonus track, but once again I argue there can't be a bonus track on an album's initial release. It just doesn't make sense (unless the vinyl release is missing that particular track). Anyway, it's a fun, rockin' rendition that becomes a very cool jam. Again, I love that guitar. That jam leads into part of "The Devil Went Down To Georgia" before returning to "Ghost Riders In The Sky."