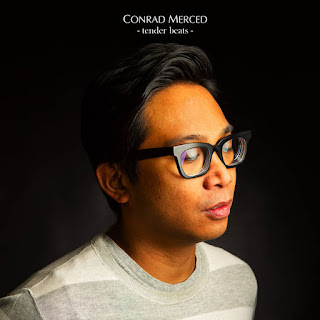 Conrad Merced is a singer and songwriter based in Chicago. He was a member of The Red Jacket and Shoplifter, and last year, after a long absence from music, released a two-song EP in tribute to Shel Silverstein titled, appropriately enough, A Tribute To Shel Silverstein. He has now followed that with his first full-length solo album, Tender Beats, which is available on vinyl as well as digitally. This album is truly a solo effort; Conrad Merced plays all the instruments and provides all the vocals. He also wrote all the material, songs that are emotionally engaging, with good, honest lyrics. The music is largely folk, but with some atmospheric work on synths giving it a different sound and mood.

The record opens with its title track, “Tender Beats,” which has a gentle, pretty, and sweet sound. There is a loving, yet sad vibe to Conrad Merced’s vocal approach. He returned to music after the unexpected death of his mother, and this touching song in particular feels informed by that loss. Some lines like “Is it cold where you are/And do I seem that far?” are surprisingly heartbreaking. It’s a gorgeous and moving song. That’s followed by “Thirty Five” (yes, without the hyphen). This is one that really grew on me. There is beauty to this track, particularly in that instrumental section in the middle, which is then revisited at the end. “We’ve got no demons to fear/And we can ride together throughout the years.” Another line that stands out for me is “And when the song is over, we can hit rewind.” That line takes me back to my childhood, when a lot of my music was on cassette. Do kids today know what “rewind” means? There is a bit of a pop flavor to “Before The Storm,” in part because of the use of drum machine. “You can leave me lying right beside her/When Southern California was always on fire.”

There is something intimate and moving about this music, particularly a song like “Don’t Stop Here,” which is one of my personal favorites. This track includes theremin and xylophone, though neither becomes too prominent in the mix, but rather adds to the atmosphere of the song. “Forget your name/And I’ll do the same” Interestingly, Conrad Merced returns to that idea in the next song, “Against The Grain”: “And I’d still tend to you/Even if you forget my name.” And the lines “But it’s all right now/And we’ll be all right somehow” make it feel like a love song for our times. That is as much optimism as we can expect, and it feels like enough. This track also features a really nice lead guitar part. Then some pretty guitar work begins “Dragonfly,” the final song of the first side of the record. This is another song of love, another song that feels intimate. “And if the world around us starts changing/We wouldn’t care anyway.” And check out these lines: “Feels like no one’s around when I’m with you/And we can take it day by day/And if the skyscrapers start falling/We wouldn’t have to get out of the way.” I really love the guitar on this track, helping to make this song another of my favorites. This music itself seems to create a place where the outside world can’t harm us, where it has no effect on us.

The second side opens with “Dog In The Fight,” a song with a happier sound which is surprising, particularly as it begins with a mention of war: “In 1990 and 1991 my father fought in a war called Operation Desert Storm.” This is a song about growing up, being different from those around him. He sings, “And I thought, Is this the American dream/Is this what we look forward to.” Yet, the song is not cynical. Rather, it is surprisingly positive, with lines like “And I don’t have a single regret” and “Fond memories and good times I had back then.” It’s an interesting track. That’s followed by “I Just Wasn’t Wired That Way.” There is a strange beauty to this one, a song in which he reaches out to someone. “When you left that day/I could have asked for you to stay/But I just wasn’t wired that way.” I love how this music creates its own atmosphere, its own world, just different enough from the regular world that we feel safe within it. You know? Once you’re inside, you feel a desire to drift along within, and with eyes closed or open, you’ll see the same things, experience the same sensations.

Then “Ghostwalking” surprises me by opening with an electronic beat, a steady pulse in an otherwise dreamy atmosphere. The tone then changes, as the acoustic guitar takes over and the pulse takes on a more natural sound. Then it is like these two sounds are combined, and all that is before the vocals come in. Conrad Merced creates the mood and an unusual landscape before offering the lyrics, an interesting approach that works so well for this track. “You always asked me if I was warm/When you called me on the phone/Chicago winters are relentlessly merciless/Freeze you to the bone/And I can’t feel my hands tonight/I’ve been ghost walking in your footsteps lately/Down a cold and darkened path.” Then as the other instruments recede, the beat – the pulse – remains a moment longer. There is a flow to the music on this album, sometimes lyrically, like the repeating of the idea of forgetting one’s name that I mentioned earlier. Also, “Ghostwalking” mentions winter, and the next song, “The Bittersweetness,” opens with these lines: “The bitter sweetness comes and goes/I always think of you when it snows.” There is certainly something beautiful about this song. The record then concludes with another sweet tune, “Still Can’t Walk Away,” a song that seems to me to address Conrad’s absence and return to music, to approach artistic inspiration as a relationship. “And when you came to me, you made my fingers bleed/When we argue, we put it on display/But after all this time, I still can’t walk away.”

Tender Beats was released digitally on July 23, 2019 and on vinyl on August 15, 2019. It’s a beautiful album that I’ll likely be returning to often.
Posted by Michael Doherty at 7:39 PM