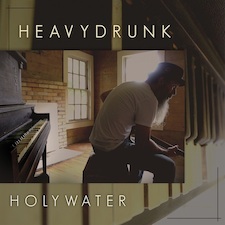 HeavyDrunk is a band based in Nashville that delivers some great raw soul and blues music. Their new album, Holywater, features mostly original material, written or co-written by singer and guitarist Rob Robinson. And, yes, the fact that there is no space between “Heavy” and “Drunk,” nor one between “Holy” and “Water” does bug me a bit, but it certainly doesn’t keep me from enjoying the excellent music on this disc. Though the first time I listened to it, I wasn’t sure initially what to make of the opening track, “If I Loved You Hard Enough.” I mean, its opening lines are at first violent then seriously goofy: “I grabbed her by the hair of her head/And drug her across the Piggly Wiggly parking lot/She lost her hot pink flip flop/In the disabled parking spot.” But approximately a minute in, I fell for it. Those fantastic soulful backing vocals certainly didn’t hurt, and I loved the horns, of course, but the lyrics and his vocal delivery also became strangely endearing, and soon I was totally grooving to this bluesy song. So, yes, by the end of the first track, I was firmly in the grip of this album.

“Walking To The Mission In The Rain” has a delicious groove and features more good work from the horn section. Yeah, the title at first reminded me of the Jerry Garcia song “Mission In The Rain,” but this song sounds nothing like that one. Here is a taste of the lyrics: “You’re reaching back where there ain’t no reaching back/It’s all uphill from here/Burning out, nothing left to feel.” I love that guitar lead in the second half of the song, particularly the way it starts, that one note held long enough to tease us and draw us in, get us ready for whatever might be coming our way. This one was written by Rob Robinson, Will Beeman and Joseph Shackelford. That’s followed by “HeavyDrunk Holywater,” a slower, soulful number with a moving vocal performance. “The only thing they left standing was her old piano/I am playing for you now.” How can those words not affect you? I wasn’t expecting a song this beautiful. Yes, that’s right, it’s beautiful. This is one of my favorite tracks. I’ve been keeping a list of bands that have a song whose title is the name of the band (such as Bad Company, Night Ranger and They Might Be Giants). This one doesn’t quite make the list, but it’s the only song I can think of whose title is the name of the band combined with the name of the album. Anyway, this sort of thing might only be interesting to me, but there you have it.

“Just give me one dancing fool/Just give me one dancing fool/And we can change the world together” are the first lines of “One Dancing Fool.” Oh yes, I love it. Then the song kicks in to become a glorious, funky tune. Fantastic! And yes, I think music can change the world. Just imagine a protest that involved everyone dancing, like two million people dancing in Washington D.C.  Mike Pence’s brain would fucking explode. And isn’t that what we all want? “High On Love” is another soulful, moving song featuring a wonderful vocal performance. I also really dig that bass. The jam toward the end has an introspective feel, a mellow sound that will carry you along if you let it. It’s pleasant sometimes to let the music take hold of your brain and relax you. Then “Memphis” begins like a soulful folk song before the horns come in to give it a classic sound. “Just like that winding river/Her love is overflowing.” That’s followed by “Somebody’s Got To Take Them Panties Off.” This is an odd one, because it has this sweet, romantic soul sound, and then the main line seems to work in contrast to that. It is like a wooing happening before our ears, as he sings “I want to be whatever you need.” But then suddenly we get the real thrust of his romantic overtures. “It’s not all about you/It’s not all about me/But I’ve been thinking about it/And it occurred to me/Somebody’s got to take them panties off, babe.”

As I mentioned, most of the tracks on this album are originals, written or co-written by Rob Robinson. Only two tracks are covers, and they are presented back-to-back just before the end of the disc. First, we get a cool cover of The Rolling Stones’ “Slave,” a song originally included on Tattoo You, the last really good Stones album (which itself was made up of tracks recorded for earlier albums). It might seem a strange song to cover, as there aren’t many lyrics apart from the main line and a bit of odd spoken word. But it’s a good jam and features saxophone, making it perhaps perfect for HeavyDrunk. Plus, I love hearing HeavyDrunk’s backing vocalists singing “Do it, do it, do it, do it, do it.” HeavyDrunk adds more lyrics to this rendition. That’s followed by a cover of Tedeschi Trucks Band’s “Midnight In Harlem,” a song included on that band’s debut album, Revelator. HeavyDrunk does a good job with it, remaining faithful to the original. The disc then concludes with another number full of soul and beauty, “Shine On.” This song makes me feel good, makes me feel that humanity is actually a worthwhile thing. Certainly we need that right now.

CD Track List
Holywater is scheduled to be released on October 4, 2019.
Posted by Michael Doherty at 11:37 AM