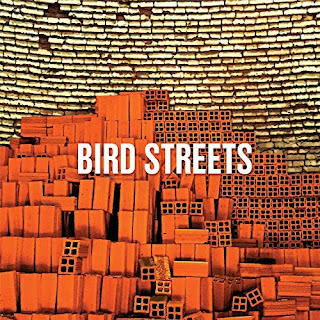 Bird Streets is the new project by John Brodeur and Jason Falkner, and on their self-titled debut release, the two musicians play most of the instruments as well as providing the vocals. In fact, only a few tracks feature guest musicians (and those guests include vocalist Miranda Lee Richards). The songs are all originals, with lyrics written by John Brodeur, and music by John Brodeur and Jason Falkner. The music is rock and pop, with an engaging sound and meaningful lyrics.

The album opens with “Carry Me,” a cool rock tune with a nod to “Swing Low, Sweet Chariot” in the lines “Marching slowly down the road/Coming for to carry me home.” That line, “Coming for to carry me home,” has an uplifting feel almost regardless of context, even in a stanza about a car crash. And earlier in the song, they sing, “Flip the hourglass again/’Cause the morning’s breaking soon.” Those lines sound so positive these days, as many of us are eager for a new morning to take us out of these dark times. There are a lot of lines and phrases that stand out for me, such as “Every night’s the longest night” and “beautiful unknown.” Then the first lines of “Betting On The Sun” made me laugh out loud the first time I put on this disc. They are “I remember when/We were tighter than Steely Dan.” I always felt that band was too tight, too clean, too mechanical. But my favorite lines of this song are “It’s a very fine line/Between living and just getting by/And you’re so comfortable/Being miserable to even try.” Those are fantastic lyrics. This song has a fairly bright sound, in contrast to lines like that and “Darkness falls on everyone’s daydream.” This song also features some really nice vocal work. Then the lines that stand out for me in “Direction” are “We walk in the direction of home/But we are never getting any warmer.” I love those lines, but it is the catchy pop rhythm of this one that makes it such an enjoyable track.

“Spaceship” has a quieter, serious folk sound to start. “No way of stopping/Until life has passed me by/Life had passed me by.” Is there something Kinks-ish here, in the vocal line?  And check out these lines: “Having the time of someone else’s life/Until the alarm sounds/And the morning arrives/If it ever arrives.” This album contains a lot of seriously good lyrics. “We’ve got a long way to go,” they sing here. Yes, it certainly feels that way. By the way, this is one of the tracks to feature guest musicians. Craig Greenberg in on piano, Chris Kelly is on bass, Scott Tofte is on drums, and Jeff Litman adds some work on guitar. There are some gorgeous backing vocals by Maesa Pullman, Miranda Lee Richards and Michelle Vidal, helping to make this track one of my favorites. The song’s last lines are “I’m just a capsule floating in space/No destination/But my resting place,” and I can’t help but think that soon hundreds of people will be floating in space thanks to Donald Trump’s new Space Force scheme. Ah, if only we could send every Trump supporter deep into space.

Another of my favorites is “Thanks For Calling.” It has a catchy rhythm and lyrics that make me laugh. The first lines, in fact, make me laugh: “Thanks for calling/I would have been better off never knowing/But you had to tell me everything.” And then also these lines, which are wonderful: “Every time the phone rings/I get a chill, it could be you/But when it is, it’s always bad news.”  “Pretty Bones” is yet another of this disc’s highlights. It has a quiet acoustic sound to start, soon creating a haunting, intense vibe, but still with moments where sunlight gets through. And of course there are some excellent lyrics, such as these: “After all the times you’ve reached your last resort/You’re still coming up short” and “Hollywood’s a graveyard/All the stories have been told/But you’re sifting through remains/Looking for some pretty bones.” This is an excellent, engaging song. The album concludes with a solid pop tune titled “Until The Crown.” “You think you’re the king of the world/Solved every problem/Until the crown wears off.”