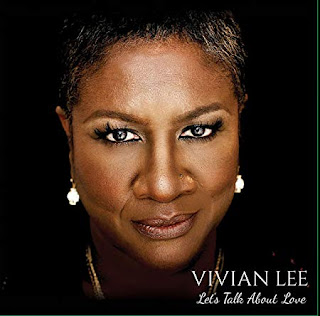 Let’s Talk About Love is the title of skilled jazz vocalist Vivian Lee’s new release. And, yes, it seems like the right time to talk about love. Most of the time these days is spent talking about treason and racism and gun violence, and though these are all important topics, it seems that we’re being worn down by them. We need to also talk about those enduring and endearing human qualities that unite us, and love is certainly the strongest of these. Vivian Lee explores some of the aspects of this perennially intriguing emotion on the tracks of this album, and she certainly has the voice for the task. She has one of the most appealing, friendly voices I’ve heard. Joining her on this release are Brendan Lowe on piano, Buca Necak on bass and Jeff Minnieweather on drums.

Vivian Lee opens the album with “Wives And Lovers,” a song written by Burt Bacharach and Hal David. Though this song has always been popular and has been recorded by a lot of artists over the years, it has never really done much for me. That being said, I do like this rendition. I appreciate the way the bass starts it off, and then suddenly the other musicians burst in, leading the way for Vivian’s vocals. It is her voice that makes this rendition something special, and I like the way the track concludes with just vocals and bass. That’s followed by “Before We Fall In Love,” a beautiful song that has an intimate, romantic sound. And this is a love song that also contains the voice of wisdom in lines like “The truth is we have both been here before/Been caught in love’s revolving door/So if we can, let’s take our time/And get it right, not just tonight.” But ultimately this is a song about giving in to desire, and you get the sense that everything is going to work out right. “Let’s rush into each other’s arms/Before we fall in love.” And as the lovers embrace, the piano takes over, for clearly she is too busy to sing at that moment. This is one of my favorite tracks. I love the warmth and honesty of her voice.

Joe Gilman joins her on piano for “Some Other Time,” a song written by Betty Comden, Adolph Green and Leonard Bernstein. There is a moment that is so bloody adorable that it catches me off guard every time I listen to this album, and makes me smile. It’s the way she delivers the phrase “Oh well” that first time. It’s so youthful and feels spontaneous. Yes, it’s surprising and delightful. You have to hear it. This rendition makes me optimistic that the two people involved will actually catch up some other time, as they say they will. Sometimes when I’ve listened to this song, I felt that they’ll never see each other again. “There’s so much more embracing/Still to be done, but time is wasting/Oh well, we’ll catch up some other time.” Vivian Lee delivers a fun, light rendition of “Secret Love,” a tune written by Sammy Fain and Paul Francis Webster that was a big hit for Doris Day. Each instrument gets in on the joy of this version, adding little touches, little comments. The world of this song is so much better than the world outside. Perhaps it’s time to escape into music. The joy continues in her rendition of “You Turned The Tables On Me.” I love that section with the bass taking the lead. It feels like the instrument is doing a little tap dance or something. Seriously, you have to hear it.

Jeff Clayton joins Vivian Lee on saxophone for “Emily,” written by Johnny Mercer and Johnny Mandell. The saxophone lead halfway through the track is gorgeous. That’s followed by “The Man I Love.” I’ve said it multiple times, but you can never go wrong with Gershwin. Vivian Lee delivers a really nice rendition, and I love that lead on piano. Then there is a whole lot of joy in her version of “Out Of Nowhere.” That’s followed by “Didn’t We.” Something about this song always makes me sad, even with Vivian Lee’s sweet vocals. It’s the idea of almost doing things, and then asking the other person for validation of almost making it. “This time we almost made it to the moon/Didn’t we?” There is a futility about life, isn’t there? We are all destined to fail, or at least to not quite succeed. And that strangely hopeful tone that the song has also seems so sad to me, in the face of it all. Maybe it’s hitting me harder now than it used to. Then the piano sounds like magic at the beginning of “Waltz For Debby.” And indeed, the song is a fanciful jaunt into a child’s world. Vivian Lee concludes the CD with “Bein’ Green.” This choice surprised and delighted me. The Muppet Show was one of the best television shows ever, not just because it was hilarious but because it had important things to say, as it did with this song (which was also performed on Sesame Street). It’s nice to end the album with a song about loving who you are.

CD Track List
Let’s Talk About Love is scheduled to be released on August 30, 2018 on Tara Records.
Posted by Michael Doherty at 10:34 PM