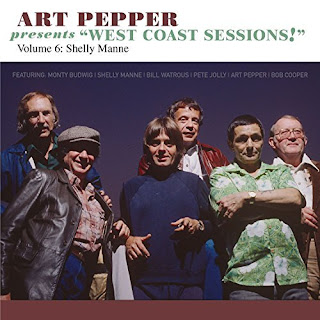 The final volume of Art Pepper’s West Coast Sessions! features Shelly Manne on drums. As a way of dodging contractual restrictions on his recording, Art Pepper pretended to be a sideman for different musicians, and six albums were released as a result. Those have now been reissued as West Coast Sessions! and include bonus tracks. Originally titled Hollywood Jam, this album features Bill Watrous on trombone, Bob Cooper on tenor saxophone, Art Pepper on alto saxophone, Pete Jolly on piano, Monty Budwig on bass, and Shelly Manne on drums. The band was originally called Shelly Manne And His Hollywood All Stars. This CD re-issue includes one bonus track, as well as new liner notes by Laurie Pepper. Like most of the recordings of this late period in his career, there is a lot of joy and freedom to the sound of this album, which I relish these days.

This CD opens with “Just Friends,” a popular song from the 1930s written by John Klenner and Samuel Lewis. This rendition has a joyous swing to it, and the horns rise like the voices of friends, full of affection and excitement. The lead on piano is an absolute delight, with lots of playful touches. And there is a brief drum solo near the end, as you might expect since this album was led by Shelly Manne. In the liner notes, Laurie Pepper says that of the six volumes, this is the one time when Art Pepper truly was the sideman, as Shelly Manne did act as leader of the band for this 1981 session. Interestingly, this tune was also included on West Coast Sessions! Volume 4: Bill Watrous.

Art Pepper turns toward romance with a beautiful rendition of “These Foolish Things (Remind Me Of You).”  I think I prefer instrumental versions of this song, as I’m generally not a big fan of list songs, even if the list includes great lines like “The smile of Garbo and the scent of roses/The waiters whistling as the last bar closes.” (I love lists, but not list songs. Go figure.) I dig the late-night vibe of this track, particularly Pete Jolly’s work on piano. This rendition is gorgeous, warm, loving. This is a song that Art Pepper had recorded before. He included a version of it on his 1959 album with Sonny Redd, Two Altos, as well as the late 1970s LP Today. “These Foolish Things” is followed by “Hollywood Jam Blues,” the only original composition of the album, written by Shelly Mann, Art Pepper and Bill Watrous. This is probably my favorite track. It has such a cool, sexy vibe right from its opening. Ah, here is a tune you can just sink into, wrap yourself up in, get into bed with. Light some candles and treat yourself right, and be ready for a powerful, glorious climax to the song. This was sort of the title track of the original release.

“Lover Come Back To Me” is another fantastic track. Included on West Coast Sessions! Volume 5: Jack Sheldon is a tune titled “Softly As In A Morning Sunrise,” which originated in the 1928 musical The New Moon. “Lover Come Back To Me” is from that same source (with the line “The moon was new, and so was love” making it a sort of title track). This rendition from Art Pepper is quite a bit different from other renditions. It has its own energy, its own pace (it’s fast, man), and is probably the best version I’ve heard. No sentimental nonsense here, just a great time. This band takes this song and makes it cook, makes it live. Plus, this rendition has a very cool lead on bass. So there. That’s followed by “Limehouse Blues,” which has a delightful easy-going attitude at the start, as if to say things are good, and the world is ours. There is a sense of play here, helping to make this another highlight for me. This one too has a wonderful bass section, with just some light touches on drums and piano to accompany that instrument. And listen to those horns!

The original album then concludes with “I’m Getting Sentimental Over You,” written by George Bassman and Ned Washington, and famously recorded by Tommy Dorsey And His Orchestra in the 1930s. Art Pepper also included it on Among Friends, an LP released in 1978, with a distinctly less sentimental feel. The version on this album is somewhere in between as for its vibe and sense, and is really good. This re-issue contains one bonus track, an alternate take of “I’m Getting Sentimental Over You” that was originally included in the 2001 Art Pepper box set The Hollywood All-Star Sessions. This is a significantly longer version, and features some wonderful work by all the musicians, especially Art Pepper and Pete Jolly. It is the better of the two takes.