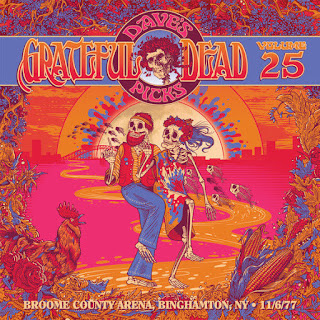 For the first Dave’s Picks release of 2018, we go back once again to one of the Grateful Dead’s best years, 1977 (in my mind, second only to 1973). The band seems to have been on that entire year, with things going just exactly right. This three-disc set contains the complete show the Dead performed on November 6, 1977 at Broome County Veterans Memorial Arena in Binghamton, New York.

They get the festivities started with a really nice version of “Mississippi Half-Step Uptown Toodeloo,” with Jerry Garcia delivering the goods both vocally and on guitar. There is an excitement here that is nearly palpable. No easing into things at this show, just nailing it right out of the gate. The jam is so good that for a moment I forget all about that last section of the song (the “across the lazy river” part), and think the song is coming to a powerful end. But then that last section is sweet and wonderful, and the song feels like a set closer rather than opener. But hell, the band is just getting started. They then gently begin “Jack Straw,” and it sounds pretty, but of course soon builds in power. This is one of those special songs where the band and audience all become one, living and thriving and moving within its story. “We used to play for silver, now we play for life.”

It’s then time for a playful “Take A Step Back.” “Isn’t that better? Isn’t That better?” Bob Weir asks. The band goes into “Tennessee Jed,” and I’m digging Keith Godchaux’s work on keys, keeping the tone fun and in motion for all of us dancing around at home. And listen to the forceful way Jerry sings the line “And he kicked my dog.” And does the band give the song an air of mystery and suspense on “The wheels turned around and the letters read”? As if we didn’t already know the outcome of that one. But, hey, for a moment maybe we don’t. The band can always surprise us.

Then it’s time for a little Cowboy Bob, with a fun, but slightly messy “Mexicali Blues,” leading straight into “Me And My Uncle,” that segue sounding different than usual, no hesitation, just bang, and we’re already there. The crowd is clearly having a great time. Jerry then calms things down a bit with a beautiful rendition of “Friend Of The Devil,” Jerry and Donna’s voices sounding wonderful together. That’s followed by an energetic “New Minglewood Blues.” Oh yes, “The preacher man calls me a sinner, but his little girl calls me a saint.” And then we get a cool, groovy rendition of “Dupree’s Diamond Blues.” That’s followed by “Passenger” and “Dire Wolf,” after which there is a request to Candace Brightman, the lighting director, on behalf of Bill Kreutzmann, who comes up to the microphone to request a light himself. The first set then concludes with “The Music Never Stopped” to keep us dancing. “We’re going to take a short break, and you can too.”

The band kicks off the second set with “Samson And Delilah.” “It being Sunday, we’re going to do a little tune of spiritual derivation,” Bob Weir says by way of introduction. There is a ton of energy here, particularly toward the end. That’s followed by “Sunrise,” another song from Terrapin Station, which had been released earlier that year, and is one of the few songs that Donna sings lead on. But it is with “Scarlet Begonias” that the second set really gets going. Always such a delight to hear, this version is a lot of fun. “Once in a while you get shown the light/In the strangest of places if you look at it right.” I love what they do right at the end of the lyrics, suddenly getting kind of quiet, with Phil Lesh delivering interesting stuff on bass, and Donna soaring gently above. They keep this groove going for a little while, adding to it and developing an interesting jam that leads into “Fire On The Mountain.” Jerry seems to have forgotten some of the lyrics, but it’s still a seriously good version, with Jerry’s guitar driving the tune forward and upward during the jam. There is the briefest of pauses before the band starts “Good Lovin’,” solid rock and roll to finish up the second disc.

The third disc then picks up with “St. Stephen” after a brief birthday message. This song is always appreciated, though of course the late seventies “St. Stephen” is quite a bit different from the late sixties “St. Stephen,” in part because of Donna’s voice added to the mix. The jam starts to get interesting, then suddenly leads to a short drum solo, and that familiar beat soon takes shape, leading to “Not Fade Away.” They let the groove develop for a while before tackling the first verse. From that song, the band goes to a moving rendition of “Wharf Rat,” one of my favorites, and then back into “St. Stephen,” before wrapping up the second set with a rousing version of “Truckin’,” with an unusual ending. The encore is Chuck Berry’s “Johnny B. Goode.”