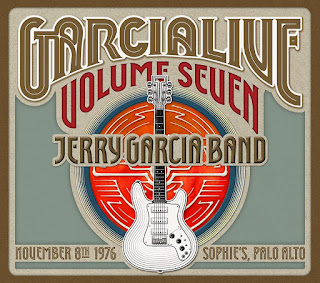 On August 1st, what would have been Jerry Garcia’s seventy-fifth birthday, Amoeba Music had a sale on all Garcia and Grateful Dead albums. So after work I went down there and bought a bunch of discs. I wanted to stay up all night listening, but I had to be up at five the next morning for work. So I popped in the first disc of Garcia Live Volume Seven, as I was in the mood for some more 1976 recordings after enjoying the Grateful Dead’s Road Trips Vol. 4 No. 5. Garcia Live Volume Seven contains the complete show the Jerry Garcia Band performed at Sophie’s in Palo Alto on November 8, 1976.

The first set kicks off with a sweet and fun version of “The Way You Do The Things You Do.” Sure, this song might come across as a bit cheesy at times, but Jerry sings it with heart, with joy, and it makes me feel good, thinking about the girl who stole my heart. And yes, that’s Donna Jean Godchaux on backing vocals. The band on this night included Grateful Dead members Keith and Donna Godchaux, as well as John Kahn on bass and Ron Tutt on drums. The jam features a good groove by Keith on keys. Then “Knockin’ On Heaven’s Door” begins quietly. At times this song finds its own reggae-like groove, and at other times it feels delicate and pretty. Everything seems to be working to create a pleasant, relaxed, but still passionate, rendition. That’s followed by a groovy, slightly slow version of “After Midnight.” Donna sounds great here, and the band gets a good jam going, with Keith really shining. And then check out the wonderful vocals on “Who Was John?” This track is, for me, one of the highlights of the first set, in large part because of the vocals. But it also features a cool jam.

I already mentioned Road Trips Vol. 4 No. 5, a recording of the Grateful Dead from 1976. Well, that set includes a version of “Mission In The Rain,” a song the Dead didn’t do all that much. This Garcia Live volume also contains a rendition of “Mission In The Rain” done approximately five months later, and it’s excellent. This is one of my favorite Jerry Garcia Band songs, and this version is particularly good. The first disc then ends with “Stir It Up,” with Donna taking lead vocal duties.

The second disc opens with “Midnight Moonlight,” which is actually the last song of the first set. And then the second set gets off to a good start with “Tore Up Over You,” with a wonderful groove to get you moving, and some great stuff on keys. Keith really gets to show his stuff here, more so than on a lot of the Dead tapes from the seventies. That’s followed by “Friend Of The Devil,” and it’s the slower version the Dead did in concert, a really pretty rendition, with some passionate work on guitar that makes this track a highlight of the second disc. And the band follows it with “Don’t Let Go,” one that never fails to delight. This version is particularly wonderful. The band is in no hurry here, just enjoying the groove and seeing where they can take it. And at twenty-two minutes or so, they have the time to take this song wherever they desire. It’s so loose, so relaxed, and there is even a bass solo. Yes, this jam is another of the show’s highlights. Donna then sings lead on “Strange Man,” and this song, written by Dorothy Love Coates, seems perfectly suited for her.

I was especially excited to hear “Stop That Train,” because for whatever reason, it’s been in my head off and on for several weeks now. I find myself singing it at some point nearly every day. So hearing this version satisfied some need of mine. There are some surprisingly sweet and delicate moments in this rendition. The show then ends with the fun disco, rhythm and blues tune “Ride Mighty High.”