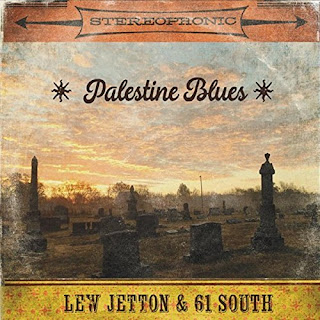 The whole country has the blues these days, and things are getting even more screwed up out there, as Donald Trump’s rabid fans have gotten loose from their leashes. While we wait for them to be rounded up and sedated, we can enjoy an excellent new release from Lew Jetton & 61 South, Palestine Blues. This album contains all original material, written by Robert Lewis Jetton. It follows the 2016 release, Rain, which is the album that turned me on to Lew Jetton & 61 South. The band on this new release is Lew Jetton on guitar and vocals, Otis Walker on bass, and Erik Eicholtz on drums. J.D. Wilkes joins them on harmonica on certain tracks. By the way, apparently Palestine (in addition to being an area of seemingly eternal conflict in the Middle East) is an area in Paducah, Kentucky, where Lew Jetton lives.

The album kicks off with “Will I Go To Hell,” one of the tracks featuring J.D. Wilkes on harmonica. And his harmonica is so expressive, such a great presence. This song is working so well for me, a perfect song for these strange days of strife and division. “I hear you, politician/You yourself did stray/Will I go to hell/If I don’t vote your way.” And check out these lines: “Sometimes I want to live, sometimes I want to die/Will I go to hell if I don’t feel like trying.” I know a lot of us can relate to these lines. I hope the current political and social situation comes to a swift close soon, so we can get back on track. Will that be enough to push back the depression that so many of us feel? I don’t know, but certainly it will be a good start. Anyway, this is a seriously good song to start the album. It’s followed by “Oh My My,” a harder, somewhat harsher tune, a sound which is fitting the times, don’t you think? “I hate my job, hate this strife/Hate this town, hate my life.” There is just the slightest amount of optimism in the lines, “Maybe someday change my mind/Maybe come out on the other side/Maybe darkness turn to light.” And that’s the thing – no matter how dark things become, we still hold onto the possibility of improvement.

“For The Pain” is my favorite song on this album. It has a mellower vibe and groove, and really moves me. Like the best of the blues, this song has the power to make us feel better even as it digs into our pain. The pain of living, the pain of addiction. Here is a taste of the lyrics: “Here comes the pain again, I wonder when it will end/My addiction is my only friend who always stays by my side/It's just my pain and me, we keep to ourselves/Doctor, write me up, or I'll do it myself, for the pain, for the pain.” Lew Jetton delivers an incredibly personal and heartfelt vocal performance here. I also love his emotional work on guitar. What an incredible song.

“Mexico” is about jobs moving to other countries, something a lot of folks are experiencing these days. My brother just lost his job, as the position went to India. “Mexico” is followed by “Sold Us Out,” and this one too feels timely (though I suppose it would have felt that way for quite a while, and – I fear – probably will for decades to come). “The politicians in DC done sold us out/Don't give a damn about you and me, they sold us out/We’re taking on more than we can bear/They’re making the money and they just don't care/They want more and more and more.” And, no, it’s not just the politicians, but the corporations who are addressed in this song (though really the lines between the two are more than a little blurry): “The corporations with their profit line, they sold us out/They want to take away my overtime, they sold us out/It's ‘bout the money and you best beware/Don't give a damn and they just don't care/They want more and more and more, they sold us out.”

“Drinking Again” is a wonderful, somewhat mellow blues tune about how we turn to alcohol for many different reasons. “One for the road, one ‘cause you're mad/One when you're happy, another when you're sad.” I like that he’s not committed to stopping as he sings “I guess it’s a sin.” I love how honest Lew Jetton is. How many of us are certain about anything? Though at the end of the song, perhaps he’s convinced himself and is sounding more sure. And then in “Don’t Need No Devil,” he sings, “You know there ain't no whiskey can take away my pain/Ain't no whiskey can take away my pain/It just makes it worse, and the pain, well, it just stays.”

The album concludes with a good blues rocker, “‘Bout Time,” one which will probably speak strongly to a lot of us. “‘Bout time to stop feeling bad/Change my way of thinking before it drives me mad.” But it’s not that easy, and the song doesn’t pretend that it is. At the end, Lew sings, “‘Bout time, they all say the same/Yeah, that's easy to say when you ain't the one in pain.”